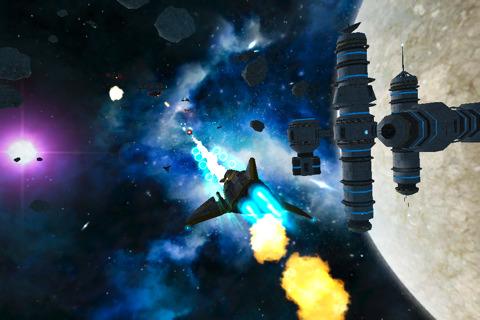 A game as big as the galaxy.

Space is a big place. Like, really big. So consequently, Galaxy on Fire 2 is a really big game. It spans the galaxy, allowing you to visit far away planets and systems while fighting pirates and mining for precious minerals. There’s a lot to do and a lot to see. So it’s a good thing that the game looks great, with some incredible 3D graphics and beautiful ship designs. It takes a while to get into, but for those looking for a deep space sim on the go, Galaxy on Fire 2 might just be the best thing around.

The game stars Keith Maxwell who somehow manages to get himself not only transported across the galaxy, but also in time, some three decades in the future. While the game starts out with Maxwell simply trying to find his way back home, he eventually gets caught up in a battle with a strange and mysterious alien force known as the Void. It’s a long and perilous journey, full of plenty of interesting characters and story developments.

Aside from the main quest, you can also take on a variety of side quests, or freelance work, as the game calls it. These not only add some variety to the game, but also let you earn some much needed money. Each space station you’ll encounter features a space lounge and each space lounge is full of space people looking to send you on space missions. These can range from helping clear away all of the garbage orbiting around a planet to ferrying passengers across the galaxy to tense fights with space pirates. You can also mine asteroids for precious minerals, which can either be sold for cash or combined with blueprints to make rare items and upgrades.

You don’t have to spend a lot of time with the side quests – aside from a frustratingly slow section at the beginning of the game – but it’s a good idea to do so. Constantly upgrading your ship is a key to success, and to do that you’ll need money. You’ll start out with a simple mining ship which you can then slowly improve with better weapons, armor, shields, passenger cabins, sensors, and a whole lot more. Eventually you’ll even be able to purchase sleeker and more sophisticated ships, those these come with a hefty price tag. There are a whole lot of options, but the simple menu system makes tweaking your space cruiser very easy.

Galaxy on Fire 2 supports two different control schemes for when you’re actually flying your ship, so you can use either tilt or a virtual joystick to control flight. Both work relatively well and you’ll also have several buttons to control your primary and secondary weapons. You can set your primary weapon to auto-fire to make battles a little easier, and your ship has an auto-pilot feature that allows you simply pick a destination and then relax until you get there. For long distance trips you can use a map and simply pick out your destination, eliminating the need for long distance flights. With the exception of the mining mini-game – which is as fast as it is frustrating – controlling the game is very simple. But what you gain in simplicity, you lose in speed. Not only does your ship seem to move at an incredibly sluggish pace, but the process of using the map to go on long distance journeys is slow and tedious. 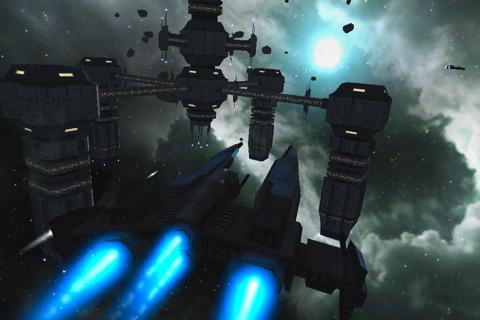 So it’s a good thing that the game looks so great. As you fly around the galaxy you’ll be treated to some absolutely stunning 3D visuals. Different planets and areas have their own unique look, and the designs for the numerous ships and space stations you’ll encounter will definitely satisfy sci-fi fans. There’s even a free camera mode that lets you really take in the sights, and you can take screenshots of particularly beautiful moments. Rounding out the production values, the game also features a wonderful, Blade Runner-esque minimalistic soundtrack and even voice acting, though you can expect to hear the same voices used for different characters.

Like the galaxy it depicts, Galaxy on Fire 2 is huge place. It’s deep and engaging and ready to suck up hours of your life, but at the same time its simple controls and menu system make it very accessible. Whether you want to follow the epic story, take on lots of side quests, or simply explore the cosmos, there’s plenty to do in the galaxy. Just don’t expect things to go by very quickly.