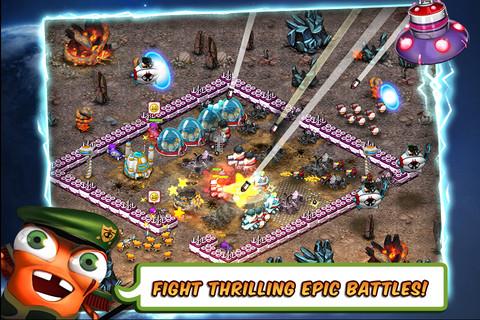 In case we didn’t get the point the first time, Galaxy Life: Pocket Adventures wants us to know that cuteness can be deadly. The original Galaxy Life was a social strategy game that traded out dour, muscle-bound generals and deadly tanks for protagonists named Starlings who looked like Tribbles who’d suddenly sprouted legs. And if the almost two million players who currently follow it on Facebook are any indication, the stylistic choice was nothing short of brilliant. Now, the cute little balls are taking their conquests to mobile devices, and there’s every reason to surrender to its charms again.

As with its Facebook counterpart, Galaxy Life: Pocket Adventures will seem familiar to anyone who’s played similar social games such as Global Warfare and Wasteland Empires. There are some minor details that give each game a life of its own (in Galaxy Life, for instance, there’s a global chat channel and the combat takes place in real time), but each game relies on the same tactics of building a home base and defending it from other players.

In time, you can even explore the galaxy and start colonies of your own. The key difference with Galaxy Life lies in how much personality Digital Chocolate pours into the effort. Not only do Starlings frolic and participate in everyday activities when not fighting for their lives, but also the narrative benefits from comic book-style story sequences that provide some reason to care about the proceedings.

Defending your base or attacking that of another player is where the true fun of Galaxy Life comes into play. To survive an attack, you’ll need place your buildings strategically within a set of walls so they can be defended with turrets and similar offensive structures. Along the way, you’ll harvest minerals and collect taxes from your citizens. Once you go into attack mode, you can overrun rival players with an army of Starlings (although it’s somewhat regrettable that you don’t have much say in their actions).

Left at that, Galaxy Life would merely be enjoyable. That’s what makes the inclusion of the ability to spy on other planets throughout a navigable galaxy and the chance to message other players in real time so welcome. Bolstered with such immersive social features, Galaxy Life: Pocket Adventures outdoes games with deeper combat and strategy far.

It’s a shame, then, that there’s no way to sync your progress on Facebook with your conquests in Pocket Adventures, and that limitation will likely disappointment to players who’ve spent the last few months amassing their empires on a PC. But the beauty of Galaxy Life is that it’s worth experiencing a second time, and so far at least, Digital Chocolate seems to have implemented a payment model that keeps that game fun without draining your wallet with microtransactions. It’s great fun if this is your first adventure among the Starlings, or if it’s the second time you’ve joined them on their conquests.