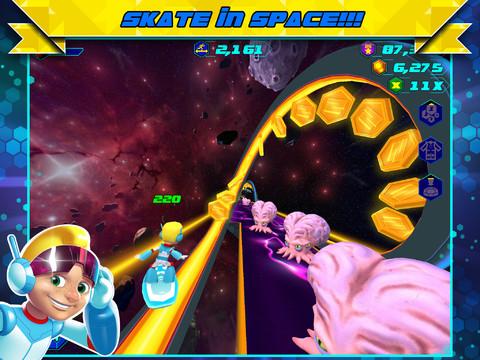 Skating through the stars.

Sick of playing those same predictable endless runner games set on boring old earth? Well Galactic Skater is here to take you up into the stratosphere, and have you do some fast-paced skating around the planets and stars! And after spending some time hopping around the Milky Way, I think more of these games should take place beyond the boundaries of our lonely planet, because it’s clear from seeing Galactic Skater in action that outer space is easily where all of the variety in level design and fun gameplay has been hiding!

Galactic Skater opens up with a brief, but seriously impressive cinematic, before launching you right into the gameplay with a hands-on tutorial. As you skate along the galaxy, the game will slow down at specific key moments to explain a new concept as each one is gradually introduced: such as launching yourself off ramps, using your Ray Gun for the first time, or bumping into space monsters. Once the tutorial is all said and done, you’re free to go off on your own and see what other kinds of surprises the universe has in store!

The controls are actually one of the best parts of the Galactic Skater experience, as they’re so incredibly intuitive that you’ll barely even notice them after a couple of seconds, and can focus all of your attention on playing the actual game. All you have to do is hold a single finger down on the bottom of the screen, and slide it from side to side to have your skater move left and right. That’s it! I’ve even found that it doesn’t really matter where your finger is on the screen either, as everything is just so incredibly responsive. As you start racking up those miles on the distance meter (or, I guess, space miles?), you’ll begin to see changes in the environment around you, even when playing in the same galaxy. For instance, the track itself will turn from blue, to green, to purple, and you’ll notice a lot more obstacles and new gameplay elements, like twisting spiral tracks and bigger monsters. And that’s only just in the Milky Way Galaxy setting!

Even though the game is still an endless runner at heart, there’s still an inherent sense of progression to Galactic Skater that makes the whole “just one more run” concept such a joy to behold. A lot of this has to do with the three optional missions you’ll always be working towards completing, like collecting a certain number of coins in a single run, or destroying a designated number of space monsters over multiple runs in the same galaxy. And even though they’re nothing new to the genre at large, these missions are just paced so incredibly well, and actually reward you for your efforts in obtaining them. After all three missions are completed your character will go up a level, netting you a hefty bonus of coins, before three new missions are introduced. You’ll even see little icons on the side of the screen that represent your progress in each mission, which is another nice little touch.

Outside of racing around the galaxy faster than the speed of light, players can also spend some time in the game store upgrading their abilities and purchasing new costumes like the “Fire Starter” or “Ice, Ice Baby” to have their skater speeding by the stars in style. Everything in the store seems pretty pricy at first, but items and upgrades can all be earned through regular gameplay, and you’ll be surprised at how quickly you start nearing those milestones, because the game is really just too much fun to put down. What’s great, too, is that your different skills and abilities all have multiple tiers of upgrades, so you can really set those space skates to overdrive. And then of course, there is the big decision of whether or not to save up those coins to move on to the next galaxy, or invest in upgrading your skills and your power-ups, like a temporary multiplier for the coins you pick up, to build your bank back up at a much faster rate.

I guess the only thing I could really say is lacking about Galactic Skater, is that it just would have been nice to see a bigger story, and a few more cinematics akin to the introductory ones: only because they were so well-produced and engaging. But I guess I can let that slide, because you can’t expect someone who’s skating around the universe to pose for a photo op every time you want one. So all things considering, Galactic Skater is a fantastic addition to the endless runner genre at large, and with its swift and simple controls, its rewarding sense of progression, and the sheer amount of variety in its addictive skating gameplay, I think it’s safe to say that this one is truly out of this world.