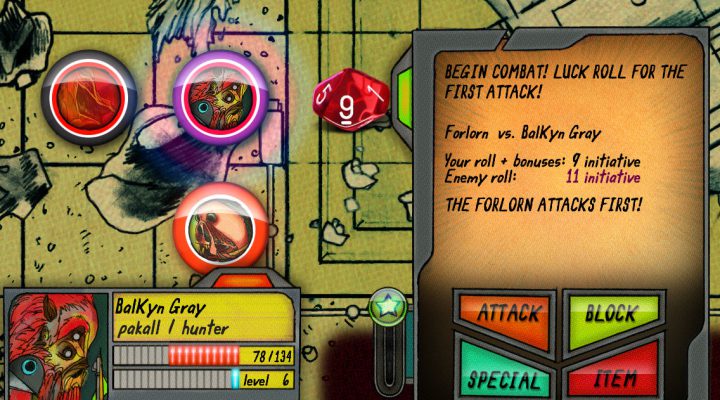 Game is complex, but not complicated.

The game's unique look isn't going to be for everyone.

Luck-based combat can be frustrating.

Galactic Keep by Gilded Skull Games has a lot in common with Crimson Shroud. It’s a hybrid between two RPG sub-genres, it tells an engaging tale through descriptive text interludes, and it’s a bit of a low-key release. More importantly, this is a well-constructed game that RPG fans need to play. 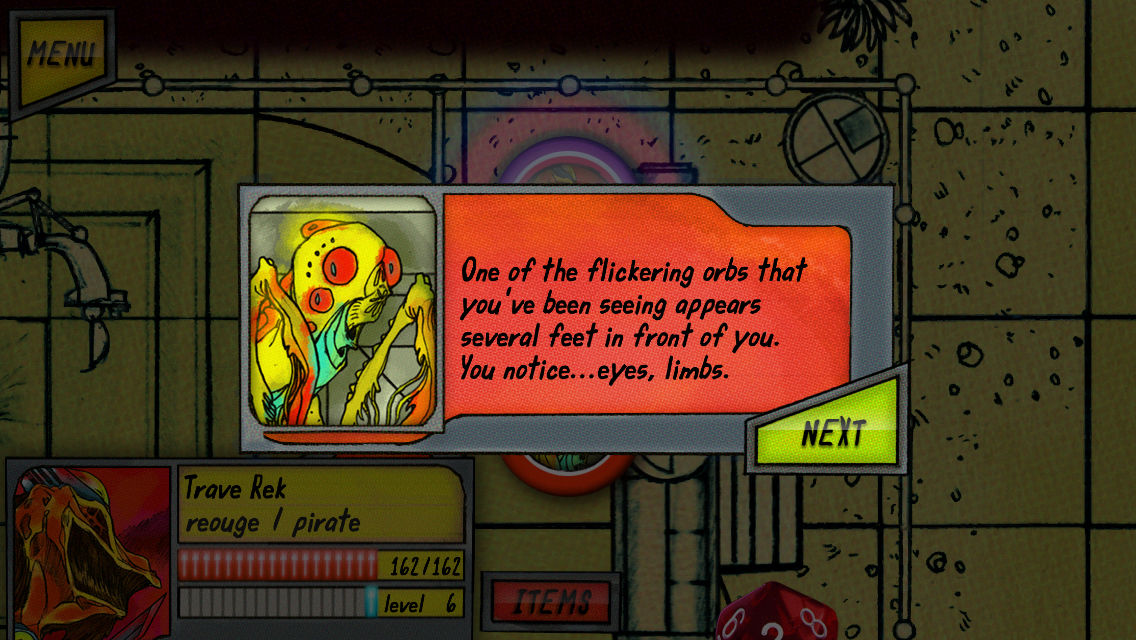 People that aren’t into the intricacies of tabletop RPGs (e.g. the thrills, the spills, and the bone-rolling) needn’t worry about feeling overwhelmed by Galactic Keep. Even though you roll up stat bonuses and must shuffle around the game board according to the number decreed by the die, all the “hard stuff” is relatively simple to work through. Your job is to concern yourself with the game’s fights and characters, as well as its story, which takes place in a sci-fi universe and has you bringing violent justice to space-rogues.

That’s not to say Galactic Keep goes easy on you. Its fights are tough, and surviving is tough.

The game’s action takes place on a large game board divided up into grid squares. When you roll the ten-sided die, you’re allowed to move the allotted number of squares.  As you move around the map, you might find cool things like secret alcoves, item stashes, and the dead bodies of previous adventurers (more on that in a bit).

You’re also very likely to find hostiles, so get ready to fight. After an initiative roll to determine who goes first, you’re allowed to attack (the strength of your blow is determined by another die-roll), use a special skill, or dig through your inventory for an attack or healing item. 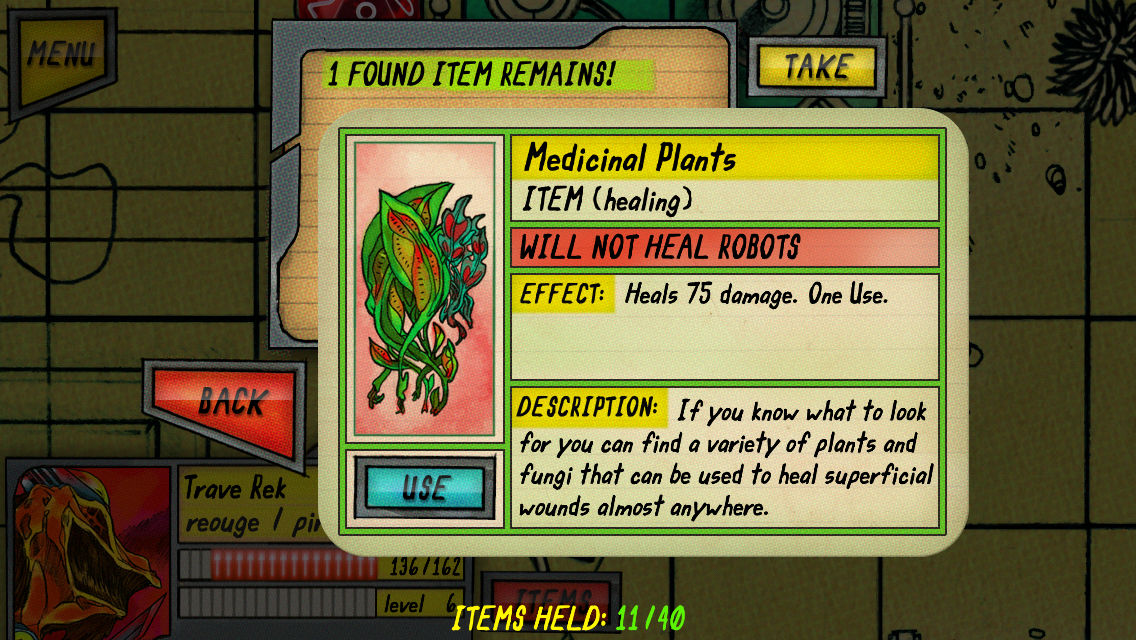 There are two relatively minor complaints worth lobbing at Galactic Keep, and they both revolve around its battle system. First, the fights are visually unappealing; they’re simply game tokens banging into each other. This may be in keeping with the game’s tabletop aesthetic, but it still left us wanting more when it came time to fight. Second, and less petty, the fights are very luck-based. A bad roll or two is all that stands between you and annihilation. That’s true of all tabletop RPGs, however, so there’s not much you can do except suck it up and pray Lady Luck loves space heroes.

Besides, it’s not as if Galactic Keep denies you mercy. If you opt not to play the game in Hardcore mode, character deaths aren’t permanent. The next explorer simply has to find the body, grab any interesting items off it, and teleport it back to headquarters. The character then becomes available again without penalty. 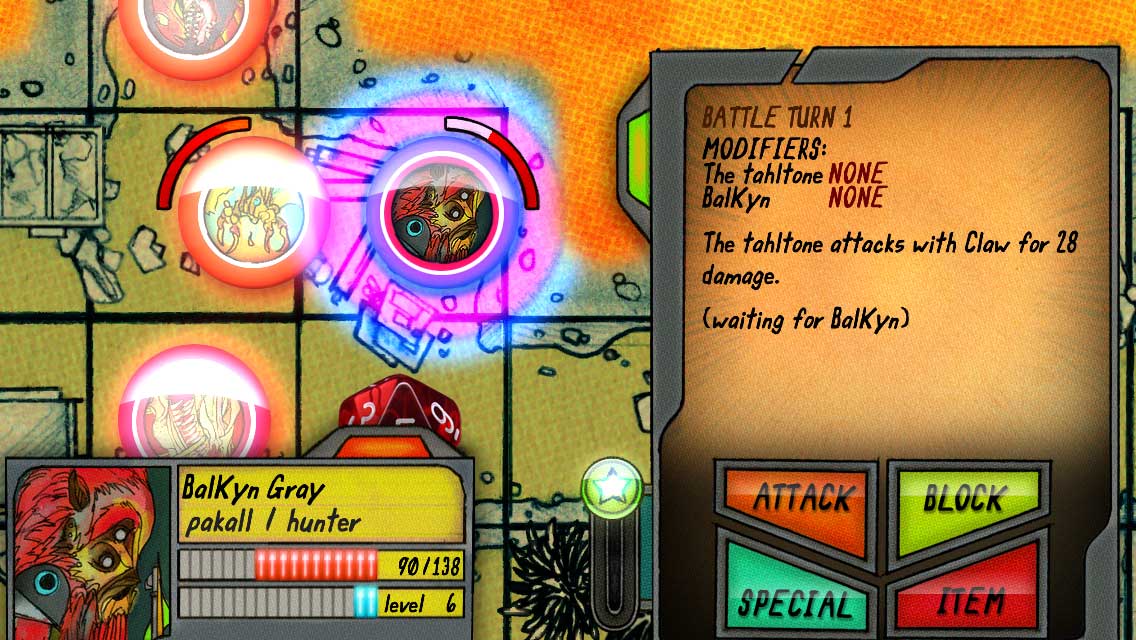 Of course, if a character wandered far from the starting point before biting it, retrieval becomes a much more dangerous business and you have to determine whether or not it’s worth it. Needless to say, it usually is — but that doesn’t make the task any less perilous.

Galactic Keep’s unique visuals might not be for everyone, and its reliance on luck makes for some teeth-gritting moments. That’s just picking space-nits, though. RPG fans of any stripe should make alien-bashing a priority.