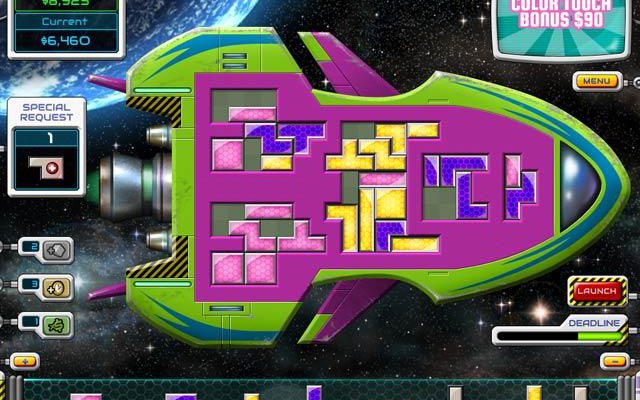 Three and a half cheers for space logistics!

Galactic Express is built around one premise: Gathering a bunch of Tetris blocks, loading them up on a bunch of cargo ships, and blasting them across the galaxy. This amusing idea is backed up by accessible gameplay, colorful graphics, and a pleasing soundtrack. It’s not without a few issues, but Galactic Express provides great service and great fun.

The gameplay for Galactic Express will be simple to grasp for puzzle fans. There are typically two things on the screen at any time, a ship and a conveyor belt. As the belt is moving, blocks (shaped oddly like Tetris pieces) start to roll out. Your job, as an employee of Galactic Express, is to drag those blocks into the ship and organize them so they fit as well as possible. While it sounds simple, there are hurdles along the way, such as oddly-shaped storage areas on the ships, and a time limit that is constantly decreasing. 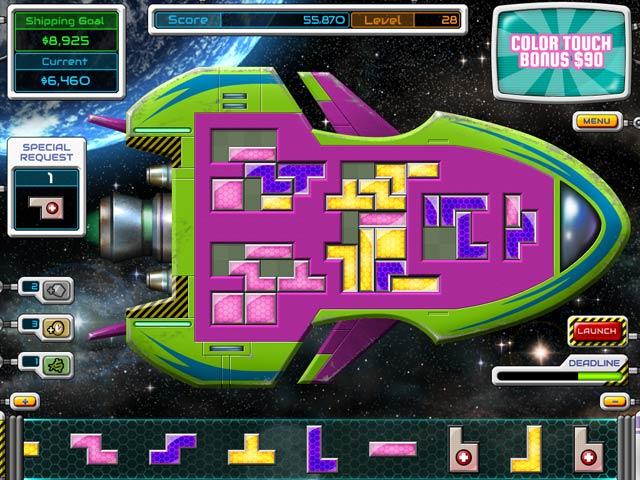 The basic concept of the game works wonders, but there are a few things that shake it up. Every time you place a block, you get a set number of dollars. There are many modifiers as to how much money you earn, such as adjacency to same-colored blocks, filling an entire area, and filling that area with just one color. Success is based solely on earning the target amount of money before time expires. This goal is easy to achieve, especially when the game gives optional missions, whose blocks give a significant amount of money upon placement.

There are also power-ups you can purchase between levels. These include the ability to fill in a single open square, and increasing your monetary intake. The power-ups can be purchased after every level using the gold given to you by Galactic Express. There are a few factors that determine how much gold you earn, so completing a level quickly and efficiently is of the top priority. Luckily, if you don’t earn many coins, you’re not at much of a loss. These power-ups are nice to have, but I went through dozens of levels before I remembered they existed.

That’s because Galactic Express isn’t difficult – it’s just long. I can’t even recall how many levels I went through before I intentionally lost just so I could see what happened. As you progress through the game, you encounter more variation on the color and shape of blocks, and the ships have more bizarre storage spaces. Later in the game you’ll run into a stricter time limit, and higher dollar goals. The issue with having to earn more money is that the game gradually increases the value of certain actions, making it easier to reach those late-game goals. 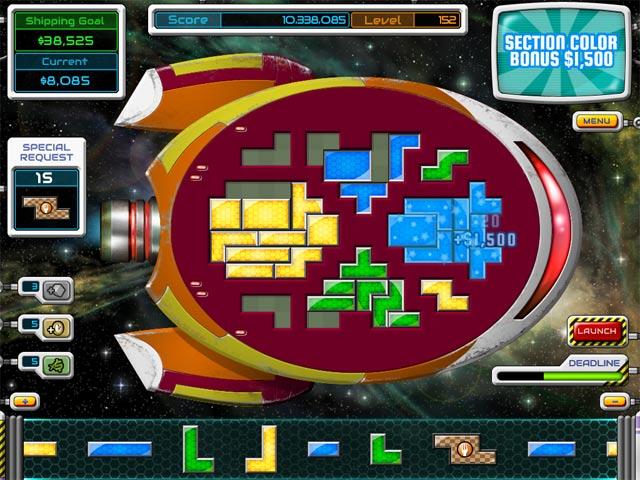 There’s not much in the way of other features.  When you start up the game, you’re given two gameplay options: casual and delivery. Delivery is the main aspect of the game, while casual removes the time limit and the dollar amounts, letting you play at your own pace. Casual mode doesn’t provide any real challenge, and most players are likely to stick with delivery.

Galactic Express feels a bit bare-bones in some areas. The lack of any endless or multiplayer modes is somewhat disappointing. Fortunately, the game makes up for what it lacks. Delivery mode’s vast amount of levels, and fast-paced stages are a blast to play. It takes a while for the difficulty to increase, but it’s fun when it happens. The game is often too easy and too long, and the replay value is low, but its colorful visuals and calm soundtrack keep it easy on the senses. It’s flawed in some areas, but Galactic Express is worth your time.