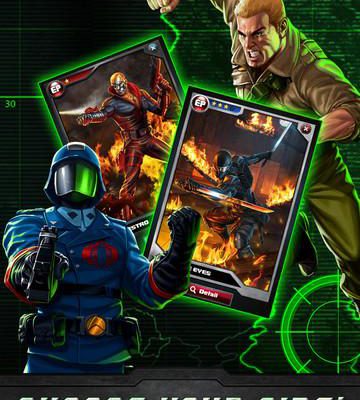 Even G.I. Joe couldn’t save this one from being just another CCG.

Oh no! It’s G.I. Joe! More specifically, it’s the collectible card game G.I. Joe: Battleground, and I’m not saying “oh no” in clever imitation of a hopelessly outmatched Cobra soldier: I’m saying it because the game is yet another clone CCG  based on a line of popular 80s toys that have found new life on the big screen.

Psst! Hey kid! Do you like G.I. Joe? Do you have room in your life for yet another CCG that’s the same as all the other CCGs that have gone before it – or better yet, do you have no idea what a CCG is? If you answered “yes” to both of those questions, then you might as well have a look at G.I. Joe: Battleground, the new collectible card game from Hasbro and Mobage. 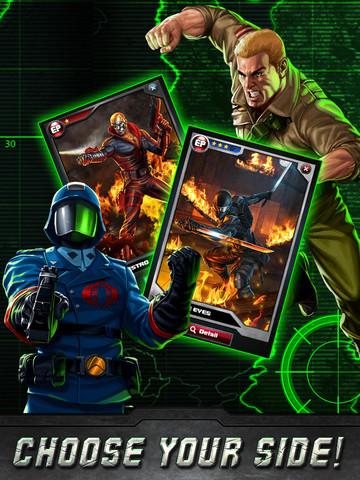 Like all CCGs, the name of the game is to assemble a digital deck of virtual cards, each one bearing the likeness of a famous (or not-so-famous) member of G.I. Joe, the stalwart defenders of all that is good and right, or the nefarious ne’er-do-wells of Cobra. There are over 100 cards in all, ranging from the common to the very rare, each with a unique rating for attack, defense, agility, tactical skill, and hit points, which will grow as cards gain levels. Aside from leveling up in combat, cards can also be upgraded with other cards, earn “promotions” by being combined with another card of the same type, or have individual stats boosted with medals.

Levels are earned primarily by completing missions as either G.I. Joe or Cobra. You’ll lead a squad of soldiers through maps, step by step, engaging and battling the enemy forces as you go. When the game begins, you’ll command three soldiers (your leader and two others), but that number may be increased later on. It sounds exciting, but moving through maps is simply a matter of pressing the “go” button to hop – usually literally – to the next sequential point in the path, while the battles themselves are also one-tap affairs that are otherwise resolved automatically. 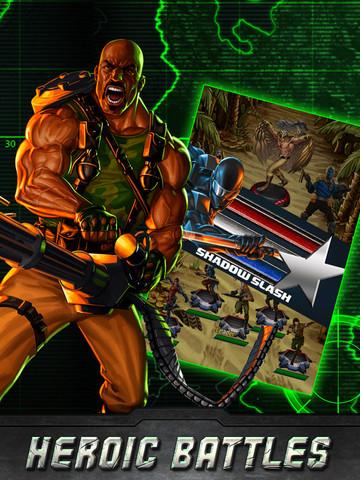 Player vs. player battles are also part of the action, but instead of having a separate PvP menu, in G.I. Joe: Battleground it’s integrated into the missions. Every so often during your battles against the enemy, you’ll encounter other players who you can opt to take on in head-to-head combat. Once you’re into a PvP encounter, you can fight other players as long as your ammo holds out, or until you achieve three consecutive victories within ten minutes, which will earn you special prizes like credits, “Battle Coins,” supplies, or new characters.

The music is bombastic and a little on the obnoxious side, especially when the “Yo Joe”-style orchestrals are overlaid with generically wailing guitars, which happens with some frequency. Rather more disappointing is the art, which isn’t exactly bad, but sure isn’t great either; some characters look really good and even boast nicely animated backgrounds, but much of it is pretty bland, and a few of them – Grunt and Stalker come to mind – are decidedly “amateur hour.” Some of that may have to do with the fact that the game covers “Real American Hero to G.I. Joe: Renegades and every series in between,” according to its App Store description, and while I have no idea how many series that may be – I’m only familiar with Real American Hero and those “knowing is half the battle (and I don’t know what the other half is)” PSAs – it’s not unreasonable to assume that different series means different art styles. Even so, impressive artwork is the bedrock of any CCG, and G.I. Joe: Battleground comes up a little short. 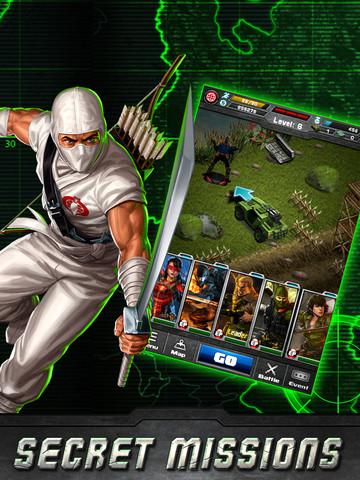 It also feels sluggish at times, slow to load at times and hesitant to respond to commands, although as an online game, the quality of your connection will have some bearing on that. It strikes me as a bit heavy on the “pay” side of the free-to-play equation, too: upgrading the size of your squad from three to five characters costs 1,000 Battle Coins, for instance, which translates to about $10, and while it’s completely optional, those who choose not to pay can expect some grinding ahead.

But the real problem here is that this is just another collectible card game in a field crowded with games that, details aside, do virtually exactly the same thing. And while originality is admittedly not a hallmark of the video game industry as a whole, the CCG genre is particularly heavy on “me too” games, a problem exacerbated by the fact that the actual gameplay is almost non-existent. If you’ve avoided CCGs because you’ve been holding out for one that satisfies your deep and abiding love of all things Joe, then G.I. Joe: Battleground is definitely the game for you; but if not, you can do better elsewhere.