Futurama: Worlds of Tomorrow Review — Slow Road to the Future 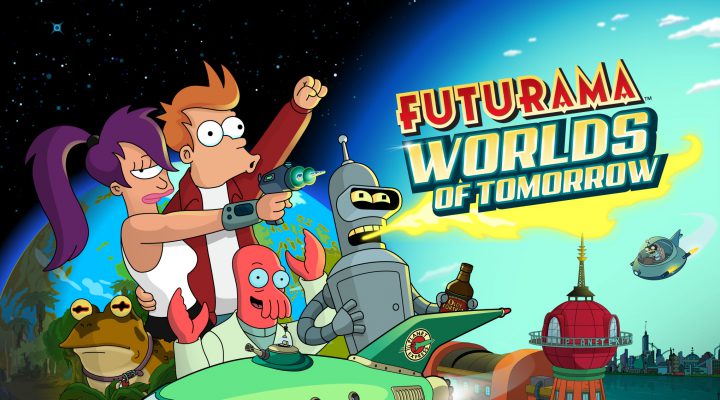 Awesome to see new Futurama content of any kind.

Tons of constraints on your time mean you end up waiting more than playing.

Choose your own adventure elements are pretty lame.

Stingy with its premium currency.

The arrival of a Futurama: Worlds of Tomorrow should have been the kind of thing that would have sent Hedonismbot into fits of indulgent laughter. After all, it’s full of all the characters you know and love from the world’s favorite twice-canceled animated sci-fi series, and it even throws city-building, combat and decision-based narrative together to try enhancing the fun. And that’s certainly what it would be, if only it wasn’t so painfully slow.

Worlds of Tomorrow starts out promisingly enough thanks to brand new animation featuring the whole Planet Express crew .Hypnotoad has found true love like we always knew he would, but the resulting Hypnowaves have made New New York an even more confusing mess of time and space than usual. But good news, everyone — there are seven artifacts strewn throughout the universe that can restore order, or what passes for it on Futurama.

Thanks to the trusty (to everyone but Bender, that is) Robot 1-X, you can start reclaiming New New York block by block in the finest city-building fashion. As you clear out more space, you’ll uncover tons of locations from the show plus have the chance to recruit more characters and place decorations like a Slurm Machine and a Suicide Booth. Futurama fans are probably already nodding along. 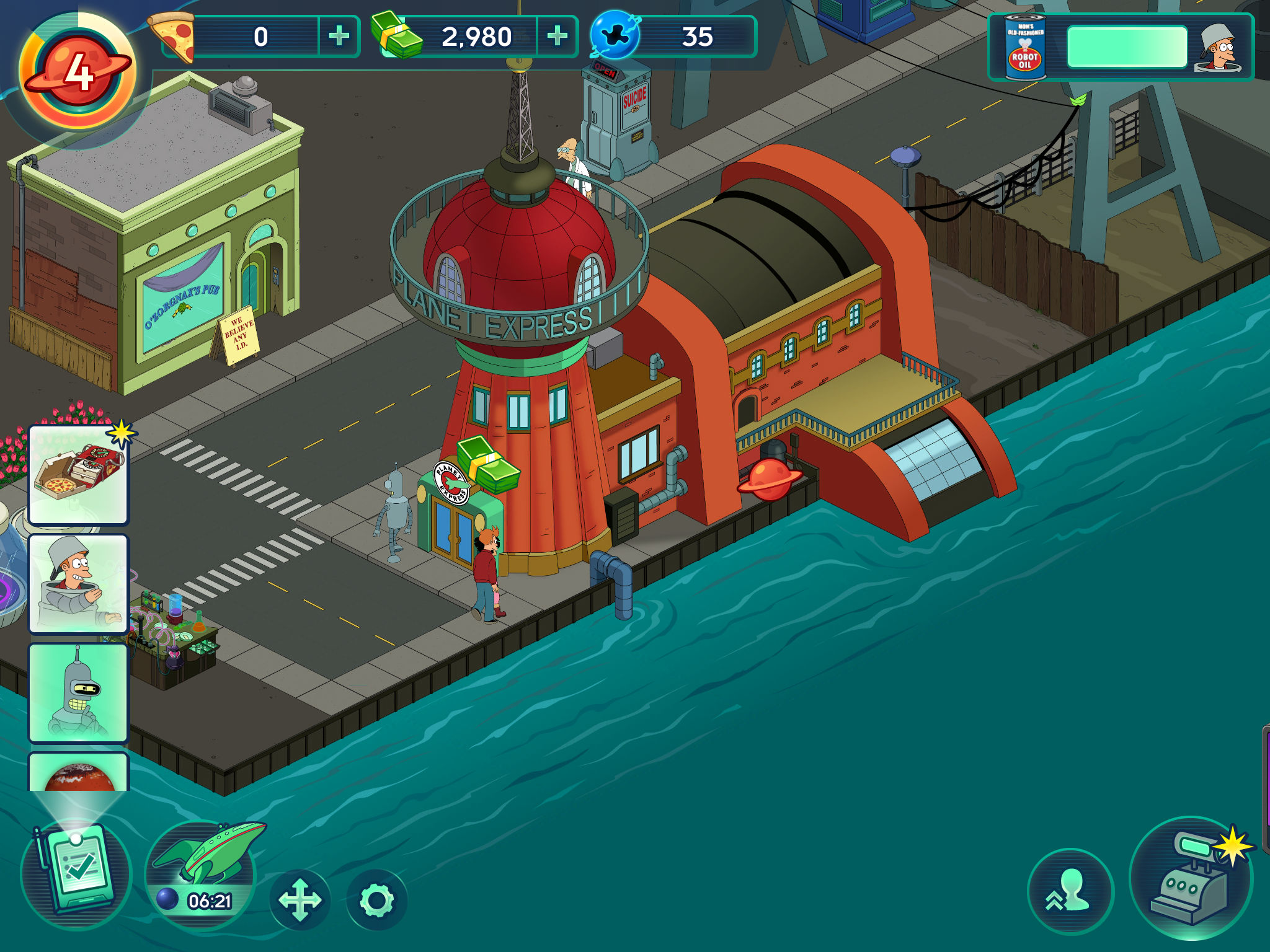 Fry, The Professor and the gang can perform actions that generate Nixon Bucks, experience points and items after the allotted time. Some items are needed to finish off quests, while others can be used to create outfits like Robot Fry and Pharaoh Bender that are essentially separate characters of their own. With a long-running show like Futurama, there’s really no limit to the number of characters that can be included, and your favorite is almost certain to be there, though we didn’t come across the Robot Devil during our review.

The city-building goes hand in hand with space exploration missions that have the crew blasting off to locales like Omicron Persei 8 and Mars to find the Hypnotons that clear out more space in the city. As you fly along the paths for each space mission, you’ll hit combat nodes and story nodes, the former involving 8-bit style fights between your characters and a variety of enemies. These fights sound and look cool, but instead of any kind of turn-based battles, you simply tap at certain times to score critical hits or defend your crew, occasionally setting off special moves when your character’s meters fill up. It’s certainly accessible but gets old fast. 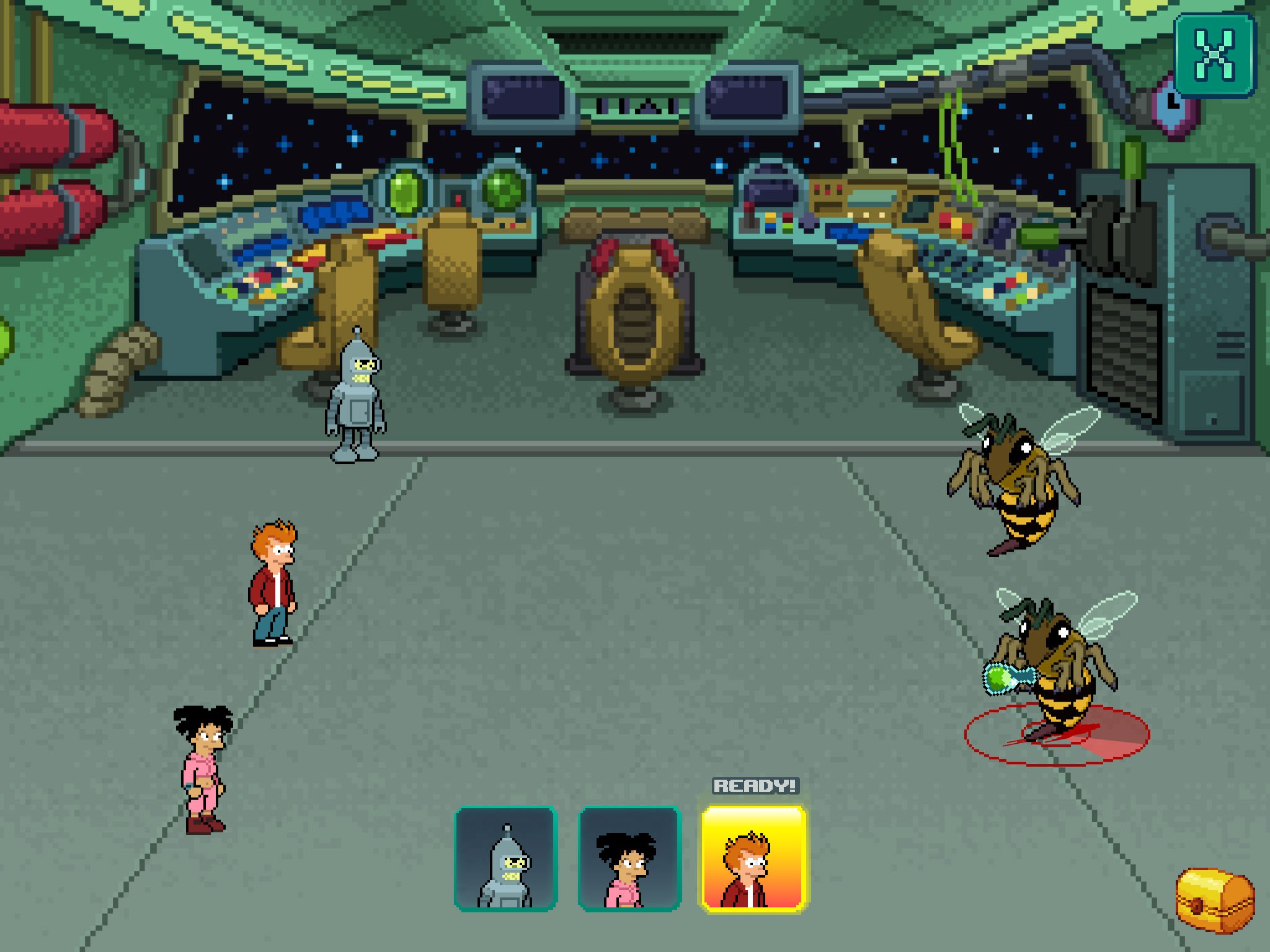 The same could be said for the supposed “choose your own adventure” bits. While it’s true that you are presented with different dialogue options and actions, and said dialogue is often pretty funny, the fact remains that the choices you make don’t really affect the story, because you can simply go back through the mission again if you mess something up. That’s if you have enough energy to do so, because the constraints on how much you can do in space early on are really noticeable.

In fact here are progress blocks all over Futurama: Worlds of Tomorrow, ensuring that you’ll be sticking to short play sessions because you really have no choice. Your characters are often tied up for hours at a time to secure items that you may or may not receive when they finish their actions, and the city and space gameplay are linked together in such a way that you can easily hit dead ends in both areas simultaneously. The game is also very stingy with premium currency. Jam City and TinyCo have done an awesome job creating an experience that’s about as authentically Futurama as you can get, but it’s frustrating how little of it you can dive into at any one time. 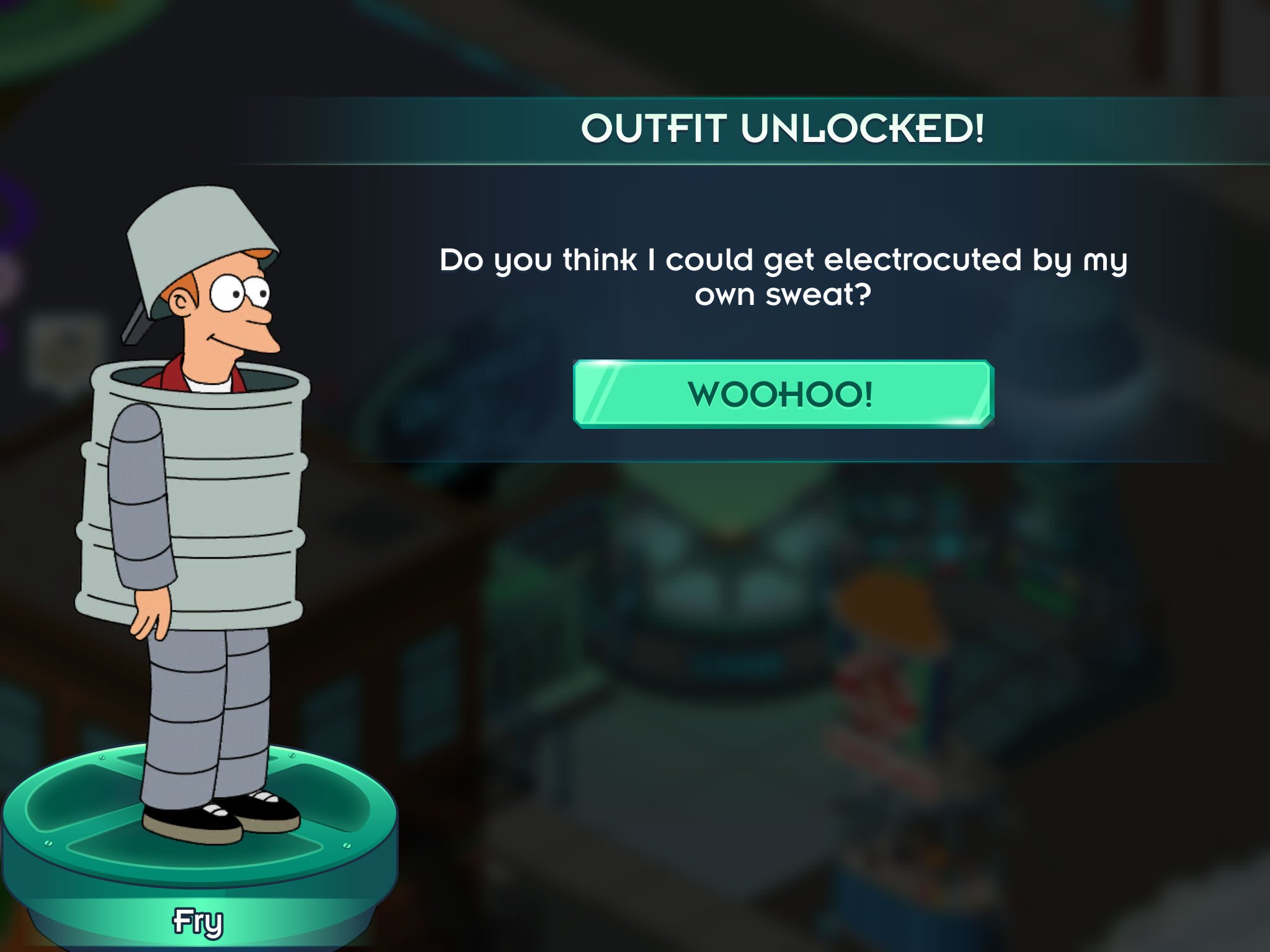 It’s too bad Nibbler can’t just lock you in a cryogenic tube like he once did to Fry while you wait everything out. If you’re a diehard fan of the series, this might be a game where you shrug off the bad stuff and just enjoy it for giving us the great Futurama world again, but otherwise, Worlds of Tomorrow often feels like you’re sitting around waiting for the year 3000 the old-fashioned way. Hypnotoad, if you could convince us it’s more fun than it is right now, we’d be much obliged.