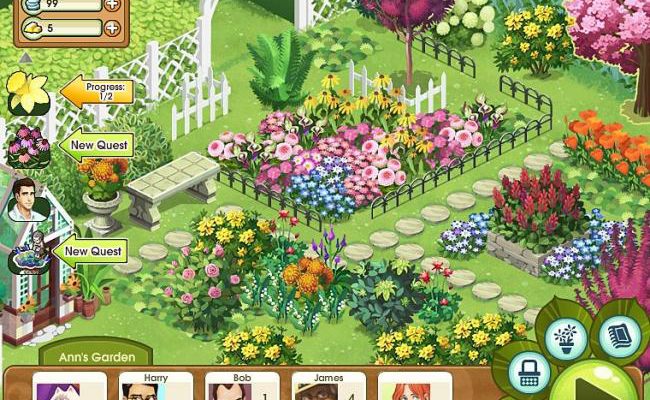 Create and customize your personal garden and become a prominent citizen of the garden-obsessed town of Bloomington.

In the realm of social media, there’s no question the Disney Company has planted its flag. Having joined forces with developer Playdom, they’ve hooked us already with colorful, evocative titles like Ghosts of Mistwood and Gardens of Time. This month, the entertainment giant makes another bid for our leisure time (and dollar) with the garden-themed social game Full Bloom. Though not the most inventive, and guilty of the usual social game shenanigans, this space-planning/match-3 hybrid is still a fun way to spend a work day break.

Full Bloom takes you to Bloomington, a city with more flowers per square foot than Amsterdam in the Spring. You’re given a garden of your own and the support of two gardening experts who do their best to guide you through the shark-filled waters of Bloomington’s competitive gardening society. At first blush that seems unnecessary, since most of us think of gardening as a relaxing activity. In Bloomington however, it’s practically a contact sport. With gardening contests and rare exotic flower prizes at stake, the gloves are off and if you want to survive, you’ll need more than a green thumb: you’ll need strategy and a large group of tolerant online friends. 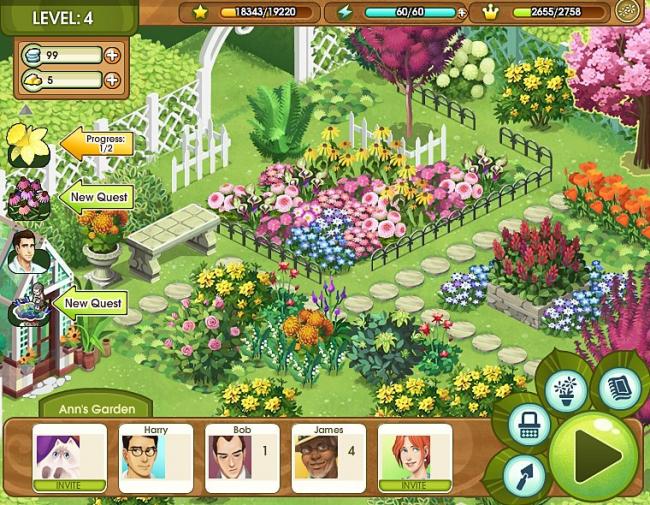 Anyone who’s played Ghosts of Mistwood (or Cityville or Gnometown or any other space-planning social game) will immediately understand Full Bloom. You’re given a small, overgrown garden, a few tools, a little money and the freedom to plant whatever and however you see fit. Like the aforementioned games, you first must create space by clearing debris (in this case with shears as opposed to bobble-headed helpers). Once space is made, you then use silver to buy seeds, plants, fences, decorative items and suchlike from the in-game store. In a floral take on building upgrades, you develop your garden further by growing your plants and flowers higher and larger by spending resources—like water, sunlight and gardening gloves—on them. The more of this you do, the more experience and reputation you earn, which in turn raises your level and grants you special bonuses.

Half the game is planting and decorating; the other half entails earning the silver you need to make your garden grow. You do this by entering different areas of Bloomington via overhead map and completing different variants of a fairly familiar match-3 game. Again, the mechanics will be familiar to anyone who’s played Bejeweled, but here you’re matching flowers rather than gems. As in other games of the genre, power-ups are earned by matching four, five or six of the same icon, and power-ups grant score multipliers and cause explosive effects. Whether a stick of dynamite or an exploding dandelion, most match-3 enthusiasts will agree that power-ups are the main reason match-3 is fun to play. Full Bloom delivers with a clever floral take on the usual cascades and exploding power-ups, not to mention a good number of beautiful visual effects.

Variation on the match-3 formula comes in the shape of differing objectives: sometimes you’re asked to match “X” flowers in “X” moves; other times you’re asked to match-3 to remove shrubbery or collect bumblebees. When your objective is reached, any remaining moves transform into power-ups that add hefty bonuses to your score, and at the end of each successful round you’re granted experience, silver and occasionally a prize like a unit of sunlight or water. With each level gained you’re awarded a gold bar, which are required to buy the cooler store items and the shears needed to clear debris. And this is where we run into the irritating side of Full Bloom. 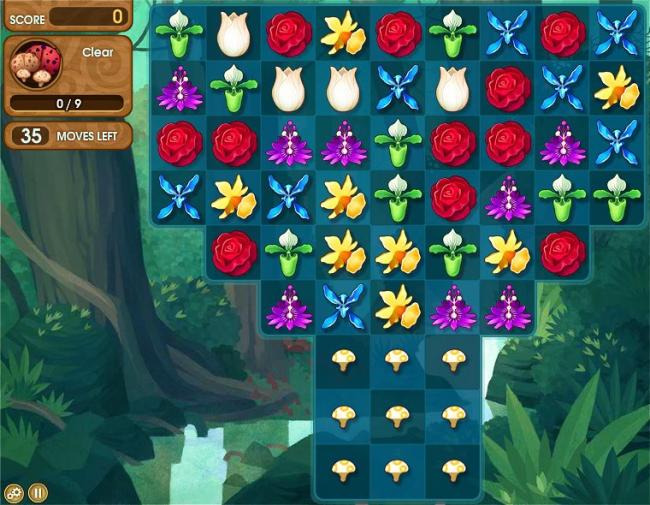 Several key items can only be bought with gold, and since this is awarded so sparingly, you’re more or less forced to spend real-world money in order to advance. There’s no way to expand your garden without first clearing debris, and shears cannot be bought with in-game silver. True, periodically you’re awarded a handful of shears, but those are spent in a flash, and once again you’re faced with the prospect of spending real cash. Another issue is the game’s music, which is repetitive enough to make you want to turn it off.

It’s true that games in general rely on musical loops in order to save memory, but the best ones disguise the repetition. Full Bloom‘s limited musical themes got to me within the first couple of half-hour sessions, and I eventually turned the sound off. Worse, however, are the social-dependent quests. Most social games encourage social interaction by giving you the option to complete quests by inviting friends or paying not to, but Full Bloom‘s quests sometimes require Full Bloom-playing friends. Let’s face it – some gamers might not know anyone else who wants to play the game, and preventing them from progressing is simply a bad idea.

Despite these problems, Full Bloom is a colorful, entertaining game that social gamers (especially flower-loving social gamers) will really enjoy. Though it doesn’t offer much in the way of true innovation, and its forced purchasing and cooperative aspects can be off-putting, its charming graphics are a treat for the eyes. Further, its friendly, familiar gameplay makes it easy to initiate new players and is immediately accessible for fans of both the space-planning and match-3 genres.