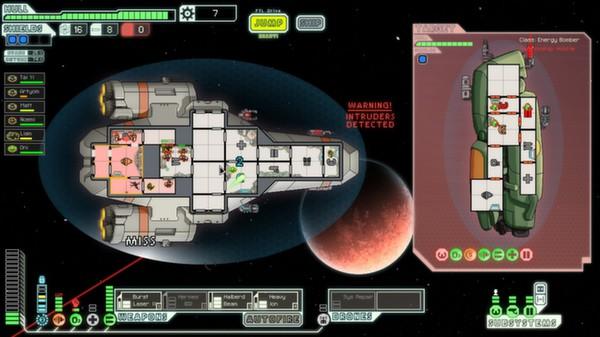 In space, no one can hear you rage quit

Who knew being a spaceship captain was so hard!? If you’re a spaceship captain, don’t answer that. For those looking to find out, there’s a surefire way to learn about the perils of manning an interstellar rig: by downloading FTL: Faster Than Light. Like going into space, it’s an experience that proves just as spectacular as it is painfully difficult. Also, if you make one wrong move, you die.

FTL is best described as a space-action-strategy rogue-like with elements of… on second thought, FTL is a game better played than described. It puts you in control of a rogue salvage vessel manned at first by three crew members, and then looses you on the vast expanse of outer space. Your mission? Have an adventure. No, really! Using your “Faster Than Light Drive,” you warp to available location on the map, and engage in a series of text based decisions, some of which lead to money (scraps), supplies, and weaponry, and many of which lead to battles.

The catch – and it’s just a small catch, really – is that death is permanent. End up on the wrong side of The Federation? Leap into battle brashly with a pirate cruiser twice your size? Get boarded by a horde of insectile beasts? You’re going to be taking a lot of damage. Sustain too much and it’s game over, and back to square one: new ship, new crew, completely new adventure. And for the first half-hour of the game, this is going to be unquestionably frustrating.

Not, however, for the wrong reasons. Far from being a zealously “retro” trial by fire, FTL simply contains a lot of moving parts. There are a whole slew of things you can do in this game because, far from being a high-octane space shooter, FTL is that part in the space TV series where the crew is running all over the ship trying to route power to the one magic part that needs it. The essence of play revolves around meticulously diverting power from the ship’s main store to its various systems and sub-systems. Survival depends on ensuring weapons are prioritized when in a fight, the medbay is ready to go when the crew needs healing, the engine is at rights in case of an emergency jump out of your sector, and – most importantly – that all of it is balanced in tandem.

FTL doesn’t skimp on variety, answering the calling of a rogue-like to give you compelling reasons to work towards becoming a master of the star-filled skies. For fans of science fiction, storylines tread lightly but prove compelling enough to keep you guessing what lies in wait in the nebulas and galaxies you’ve never been too, many of them shrouded in clouds of gas. Yet while it’s understandably hard to do in a game centred around gameplay, I would have liked to see a little more cohesion between the different parts of your journey. Together, your random text-based happenings amount to frequent run-ins with galactic law, feisty pirates, travelling innocents, and brash fellow salvagers. Certainly enough to give a wonderful air of shows like Firefly, but without much other effort put into fleshing out even a passive story in the background. 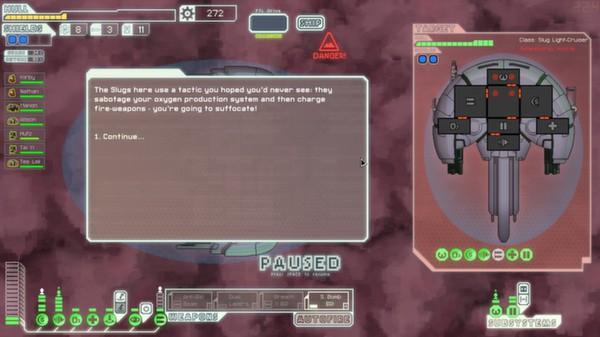 With that said, it’s the gameplay that makes this an unforgettable experience. The masterstroke here is that as hard as the game pushes you to absorb its resource realignments and calculated clicks, you’re able to push back just as hard and execute clever strategies in a wonderfully flexible manner. You’ve been boarded, and are not sure you can survive the fight? Just drain the oxygen from the room under seige and weaken the no-good pirates before you attack. Need to put out a fire while staving off enemy attack? Divert energy to your shields, drain the air in the burning rooms, and send in a crew to fix things up as you divert energy back to the weaponry! Far from a punishment, every death is an opportunity: a chance to test a new approach in the vacuum of space, protected from any long term damage by a steadily improving acumen, and a knowledge that everything fades into the black eventually. Wear your high score like a badge of honor, space traveller. You earned it.