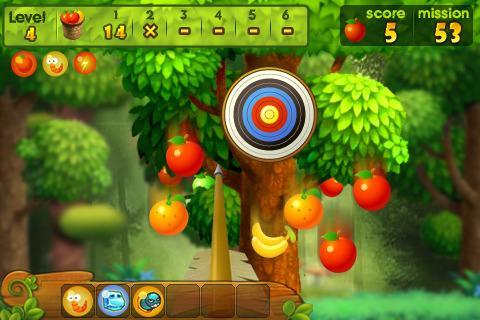 Robin Hood has a lot of mouths to feed. Little John, Will Scarlet, Friar Tuck – the list goes on and on. To keep his Merry Men knee-deep in nutritional nummies, Robin takes to the forest in search of fruit to shoot off of trees. It’s up to you to guide his arrow and fill his fruit basket as high as you can.

Fruit Shooter is an incredibly simple offering that has players attempting to hit a target as it makes its way across the screen. Pulling the arrow back with their fingers, they release by lifting their digit from the screen as the arrow sails towards the target board. The closer to the center a player gets, the more fruit falls from the tree. Players are given six shots in each level to collect a specified number of fruit, and doing so advances them to the next level where things move a little faster.

It’s very much a lather-rinse-repeat experience, but the developers have tried to toss a curveball in there by offering power-ups. Falling from the trees alongside the fruits are special items like snails, bombs, and lucky apples. Each will modify the play a little, but nothing here is so drastic that it manages to break up the monotony.

While it’s far from a must-buy, one might almost call Fruit Shooter fun if it weren’t so riddled with problems. The most glaring of these comes at the end of each level, when the game sits on the score screen so long that you’d think it’s crashed. Sometimes it’s 10 seconds, sometimes it’s 20, and sometimes, just sometimes, it actually has crashed and requires a reboot. This isn’t an “every now and then” problem, either – this happens after every level.

Other bugs and poor design choices stick out like a sore thumb. The game offers OpenFeint integration for leaderboards, but it’s presented vertically while the game itself is played horizontally. The help files that teach you how to play are dimmed to the point of unreadable. It’s as if they didn’t have a device to test the game themselves before releasing it.

The only real stand out accomplishment in Fruit Shooter is its visual presentation. Bright and colourful vegetation sets the scene, while everything from the scoreboard to the target seems lovingly crafted. You can really tell that someone invested a good deal of effort into the look of this game – if only they’d done the same thing for the coding.

While at its best this game is less than exceptional, Fruit Shooter could easily provide a satisfactory distraction to gamers looking to a two minute time sink if it wasn’t so plagued with problems. It may have debuted at 99 cents, but we’d even have a hard time recommending this if it were free. Put that dollar back in your pocket, because this fruit is simply rotten.