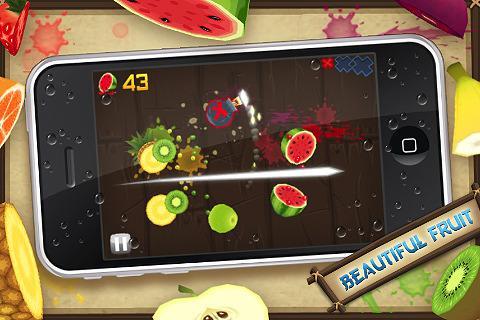 Fruit Ninja is the answer to a question that’s been on my mind for more than 20 years: what if popular 1980’s prop comic Gallagher was actually a ninja? Trade in his patented Sledge-O-Matic watermelon gag for a samurai sword and a whole bowl of fruit, and you’ve got a surprisingly satisfying recipe for iPhone satisfaction.

Like many intentionally simple iPhone offerings, the gameplay in Fruit Ninja is brilliantly basic. Fruit will be tossed up from the bottom of the screen and players will attempt to slice that fruit by swiping their finger through it. The more fruit you slice and dice, the higher your score. Miss three pieces of fruit and it’s game over.

Things get a little more complicated with the introduction of bombs that are tossed right alongside the fruit. Should you accidentally slice one it will detonate and end your game early. In between rounds a sensei dishes out interesting fruit facts like”kiwifruit contains actindin which can be used to tenderize meat, or “oranges are technically a hesperidium – a kind of berry.” Add in some OpenFeint achievements, and that’s the entire package in a nutshell.

Presentation is a big part of what makes Fruit Ninja such a pleasure, despite its lack of depth. There’s a great amount of artistic detail that’s gone into every fruit both before and after it’s been cut. The audio is even better than the visuals, with each fruit letting out its own distinctive sound when being sliced. Citrus fruits let loose a squishy sound when dissected, while bananas let out a dull thud. There’s something magical that seems to happen when the entire package comes together, creating gameplay that’s instantly satisfying with every slice.

Satisfying is really the key word here. Everything in Fruit Ninja may be simple, but it’s challenging enough that every piece of bisected fruit feels like another little victory. Simple ideas like this often lead to success, and few would deny that Fruit Ninja has earned that title. Offering up gameplay that’s as sweet as the fruit you’re slicing, it’s hard not to get addicted and come back for more.

Still, there’s no denying that Fruit Ninja is a one trick pony at best. It’s a perfect game to play while standing in line at the grocery store or killing a few minutes while waiting for the bus, but if you’re looking for a title that offers any kind of depth, this isn’t it. With only a single mode at your disposal, Fruit Ninja offers nothing in the way of variation. The inclusion of OpenFeint achievements and leaderboards gives players something to work towards, but it doesn’t do anything to deepen the game itself.

Fruit Ninja may not offer much in the way of frills, but what little it does it does incredibly well. For 99 cents we can’t help but be taken by its fruit smashing charm. If you’re looking for a quick little pocket game to hit up during those brief dull moments that life has to offer, we suggest you get a little citrus in your diet and give Fruit Ninja a try.