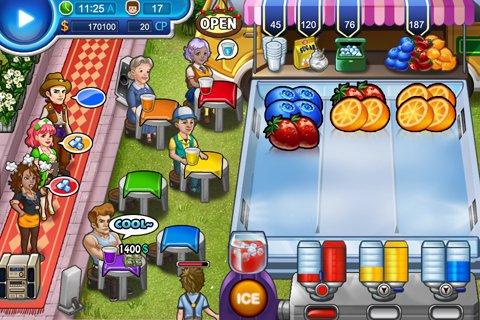 Fruit Juice Tycoon 2 offers a unique blend of genres, but fails to hold our interest for long

When I was growing up I was lucky enough to live through a lot of iconic childhood moments, though I somehow missed out on owning a lemonade stand. I starred in school plays, attended summer camps, and went on a slew of trips via my Boy Scount troop, but I always felt a little twinge whenever I saw kids in my neighborhood selling juice on hot summer days. Now that I’ve played Fruit Juice Tycoon 2 on the iPhone, however, I’m starting to think that I may have dodged a bullet; selling juice seems like it may be way more of a hassle than it’s worth.

Fruit Juice Tycoon 2 is the sequel to Fruit Juice Tycoon, telling the story of how a family-owned juice company is in the midst of a hostile takeover from nefarious executives. As a result, the owner’s grandson finds himself charged with rebuilding the company, which interrupts his trip to Vegas (there’s some throwaway comment about how the grandfather is missing, which is why someone else has to do the job). Once he accepts the challenge, the poor guy finds himself stuck in the town of Fruitville, selling juice on street corners.

The player has to build up an entire fruit juice empire across different neighborhoods in the city. In order to do this, access has to be gained to the areas of the city, which is accomplished by selling juice and completing various missions. This certainly is an intriguing-sounding play style, but something gets lost in the execution.

Gameplay is a mixture of match-three, RPG elements, property management, and timing puzzles. The core play is composed of match-three and timing: after players select a spot to sell juice from, they have three columns that they have to shuffle fruit (strawberries, lemons, and blueberries) between in order to match them up three at a time. Each time three pieces are matched, a cup’s-worth of juice is made.

After a 9-second grace period to match fruit, customers start showing up and ordering drinks. Provided players have the juice, they then have to pour out a cup for the customer – which is incredibly slow to do. As the cup fills with juice, it eventually blinks when it’s full. Players then have to tap the cup to stop the pour. If the pour takes too long or the cup is ruined with a juice overflow, customers will leave angrily; this hurts the player’s reputation in a neighborhood, which makes progressing through the game that much harder.

Meanwhile, the player has a set amount of stamina to get through the day. This shows up in the world map as an HP bar that isn’t terribly easy to read, though players can read how much they have when they start selling juice. In order to recharge, the character has to get home and get a full night’s worth of sleep. While selling juice reduces stamina, so does walking around town, which means it’s a bit too easy to pass out and lose time while the character recovers in the hospital.

Earning cash is easier said than done. Players have to regularly re-supply their stock of ingredients. As a result it’s kind of tough to save money, which means that a lot of juice has to be sold to earn enough money to rent property and accomplish in-game missions. This probably all sounds pretty boring, and it should: the game quickly becomes dull. 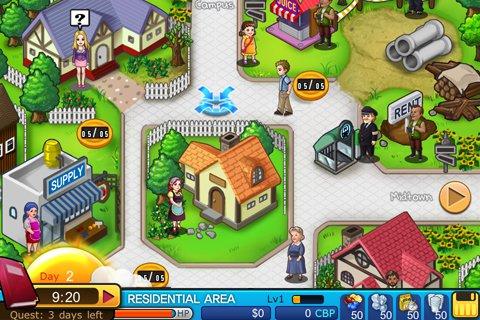 The game’s soundtrack alternates between pleasant background fare and some of the most obnoxious music that’s ever appeared in a game. When players are making and serving juice to customers, things are relatively quiet and not distracting. When you have to navigate the world map, however, the MIDI music is so annoying that it borders on maddening. Unfortunately, there’s no option to play one’s own music in the game, so players are better off simply turning the music off and just humming merrily to themselves.

The graphics, in turn, are fine, but they’re nothing special. Dialogue scenes are played out via static portraits with accompanying text. The game’s world, as well as its characters, are presented from a top-down view; again, the game doesn’t look bad, but the graphics don’t exactly stand out.

Fruit Juice Tycoon 2 is one of those titles that feels like it should be better. It’s got an interesting story, some nice graphics, and gameplay that is somewhat interesting at first. Unfortunately the play mechanics get too repetitive too quickly, story progression is too slow, and the soundtrack is annoying. The worst sin that the game commits, though, is that it quickly turns into a boring experience. It’s not bad, but it’s a great example of the word “meh” in action.