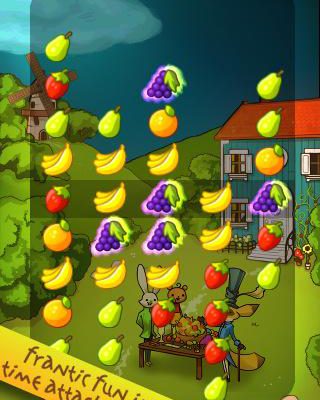 There are certain things within the world of video games that we’ve all become accustomed to. For one, EA will always manage to squeeze out more sports sims each and every year than there are actual sports. Secondly, none of our homes can ever hope to be as slick and sleek as the wonderfully white abodes depicted in Wii adverts. Thirdly, and perhaps most crucially, without several hundred new match three games on mobile a week, the world would implode.

That last supposed ‘fact’ might not be strictly true, but with this particular brand of puzzler showing no signs of slowing down – Fruit Frenzy the latest in an ever lengthening line of match threes to hit iPhone over the last three or so years – it’s becoming especially hard for each and every one to find a place in the market. Most simply fail to stand out in the crowd.

Interestingly enough, Fruit Frenzy‘s tactic to draw some attention to itself is somewhat different to those of scores of its rivals. Rather than flooding play with power ups, cute and cuddly characters or giving the game some form of bizarre, but ultimately memorable setting, White Bat Games has decided to strip back its set up somewhat. 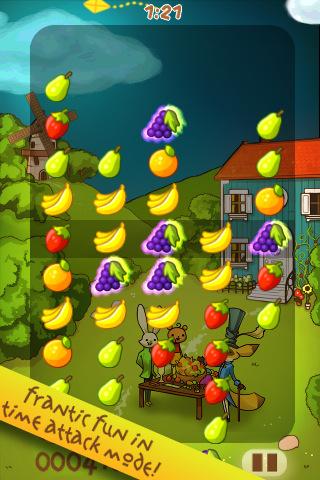 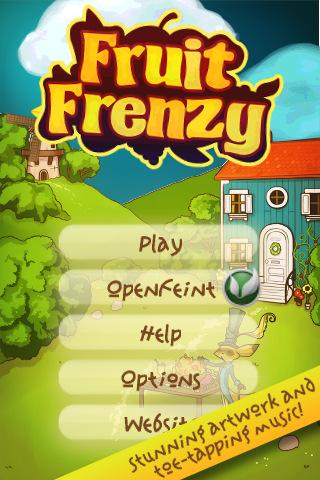 In fact, it’s not overstating it to say that this could well be one of the simplest, most straightforward match threes you ever come across. Simple doesn’t necessarily mean easy, of course, and Fruit Frenzy – like almost all match threes – has a brilliant way of causing your brain to freeze when the solution is right in front of your eyes.

Rather than lay open the whole board to you, Fruit Frenzy gives you just one row of fruit to manipulate. As well as being able to slide the row in question left or right (the five strong line of fruit running as if on rotation, with those disappearing on one side of the screen reappearing on the other), you can also shift any of the columns up and down to alter the fruit in play.

The idea is to manipulate the line almost like a Rubik’s Cube, shifting fruit in and out of the center row to make match ups of three or more. As you might expect, any fruit you match up are then removed from the board, with an added roster of juicy goodies dropped into play as a replacement

That is, of course, assuming you’re playing the game’s standard mode which is simply a case of survival. Here, play comes to an end as soon as the board fills up with fruit, with the idea being to post as high a score as you can before the game comes to an end. That’s an ethos that’s also prevalent in Fruit Frenzy‘s timed mode, which gives you just three minutes to do much the same thing. 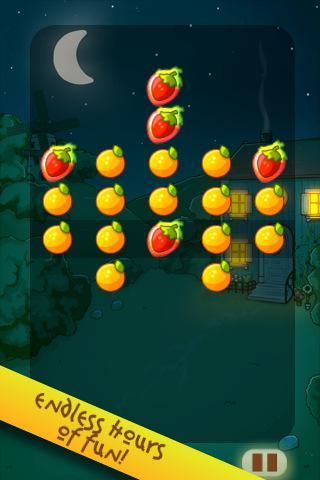 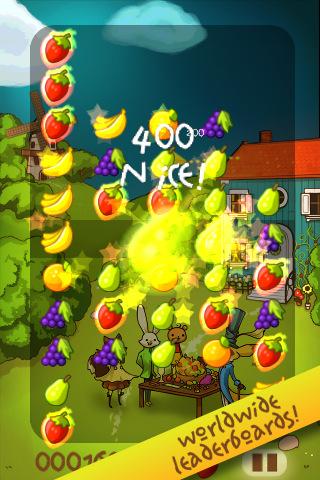 The most confusing part of play is puzzle mode, however. Said mode gives you a set number of fruit to clear from play, doing so a question of following set moves to ensure each and every piece is mopped up.

Make a wrong move along the way, however, and you’re left with odd bits of fruit all over the board that can’t be matched up. Chances are, however, that you won’t actually realize this until you actually run out of moves.

Rather than Fruit Frenzy informing you of your misdemeanour, a manual restart appears to be the only option. Indeed, the game gives you no clues as to how to achieve your aims, other than to point you towards a particular brand of fruit at the start of the game – often stating the obvious in the process.

All that aside, however, Fruit Frenzy‘s biggest mistake is that, as a result of its stripped back style, it lacks any sort of spark or originality. There’s nothing offensive about what’s on offer here, but likewise, the whole set up is far too sterile to really stand out from the rest of the pack. Like many before it, Fruit Frenzy stands in the mighty shadow of Bejeweled and co, only in White Bat Games’ case, it’s a lack of ambition rather than an ultimately sickly abundance or riches that acts as Fruit Frenzy‘s somewhat predictable downfall.