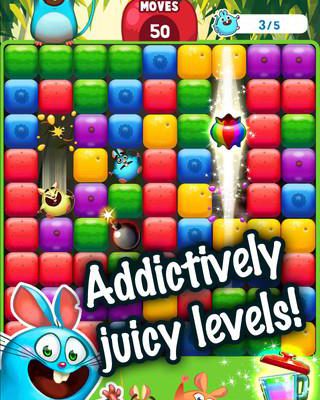 Fruit Blast Mania from TeamLava combines two of gamer’s biggest interests to make for quite the juicy equation: block-matching games, and tons of delicious fruit. But while the game’s gleaming presentation and fun core mechanics could have made this one an easy App Store favorite, a ridiculous freemium model transforms the game from that shiny red apple displayed on the kitchen counter, to the old bruised banana that fell behind my desk over a week ago.

The game has a stellar presentation, and the visual charm is positively mouth-watering; from the many matching screens right down to the bright and vibrant world map. Each colored piece on the game board represents a specific kind of fruit, like watermelons, strawberries, and oranges. Tapping on a fruit will clear it and all adjacent pieces of the same color, as you carefully position the fruits together in order to build up those bigger combos. It’s a premise I’m sure we’ve all seen on the App Store before in one form or another, but one that continues to never get old: especially here in Fruit Blast Mania. Your entire adventure will take you to all sorts of dreamy locations like The Juice Box and Strawberry Hill throughout the game’s 100+ stages. 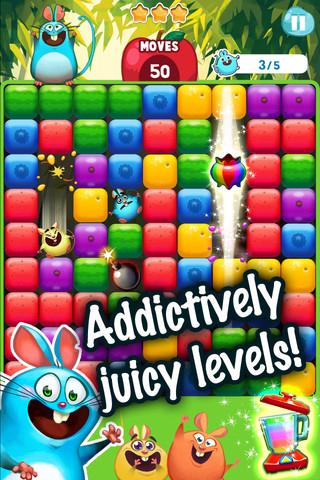 The goal of each stage is to strategically clear blocks of fruit to drop these little mouse babies down to the bottom of the screen. While the earlier stages are simple enough, some of the later ones quickly advance to incorporate more difficult restrictions, like move limits, that really force you to plan ahead in order to come out victorious. But to make all this fruit matching a little bit easier, you’ll have a number of fun and fruity power-ups at your disposal, like the Pineapple Grenade, which clears all single fruits, or the powerful Blender, which clears an entire column of your choosing. By the time you reach stage 13, the game opens up some optional challenges that are a real test of your fruit-matching abilities, like “Clear a group of at least 15 fruit” and “Complete level without using the Blender.” Completing each challenge will reward you with a handful of keys, which can then be used to purchase bonus picnic baskets filled with mystery prizes.

Fruit Blast Mania could have been a really great game, if not marred by a very strict and rigid freemium model. For instance, all players will begin the game with 21 pink gems, the highest form of currency in Fruit Blast Mania. The first time I ran out of moves in one of the early stages, the game gave me the option to buy more moves and continue playing right where I left off: which would set me back (you guessed it) 22 pink gems. The first option of things to buy in the store is specifically 22 pink gems for $0.99. Is it a coincidence that almost everything in the game is just outside of my initial price range? I think not. 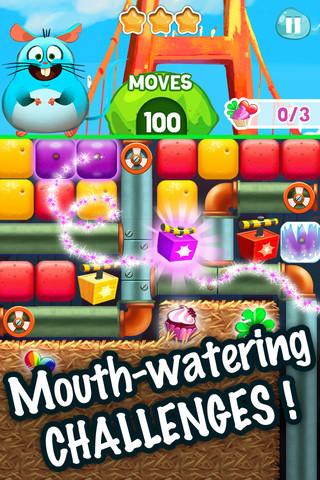 Maybe I’m just not very good at the game, but a lot of the levels seem like they’re specifically designed to make sure you fail in the number of moves they allot, and persuade you to hit that “Add more moves” button again. The special power-up prices are even more expensive, and you’re only guaranteed to experience about half of what the game has to offer without paying up at regular intervals. It wouldn’t have been so bad if these were one-time purchases, but when you want me to pay 11 pink gems for a mallet power-up that clears a single fruit block every time I want to use it, something is seriously not right here. In this regard, TeamLava chose to disregard the same mistakes it made with Jewel Mania.

You start off in the game with a maximum cap of 5 energy points: a number which never seems to increase the farther you get in the game. Playing a stage will cost you 1 energy point, and they regenerate at a rate of 1 energy point per hour or so. Luckily, you can also earn another bonus energy point each time you successfully finish a stage, which enables you to progress through the game at a fairly steady rate. But for those of your completionist gamers, who want to earn three stars in every stage, expect to pay up or endure a lot of waiting in order to replay any of the earlier puzzles multiple times. And if you know you’ve messed up right at the beginning of the level and want to start over, well guess what? That’s going to cost you another energy point too.

Needless to say, Fruit Blast Mania is not necessarily a bad game: rather, it just finds a lot of ways to make you not really enjoy playing it. The game looks great, and it plays great too, but when it costs more to get to the end of the game than it would to buy an entire shopping cart full of real fruit down at the grocery store, then it might be best to leave this one next to the Brussels sprouts and find something tastier to eat instead.