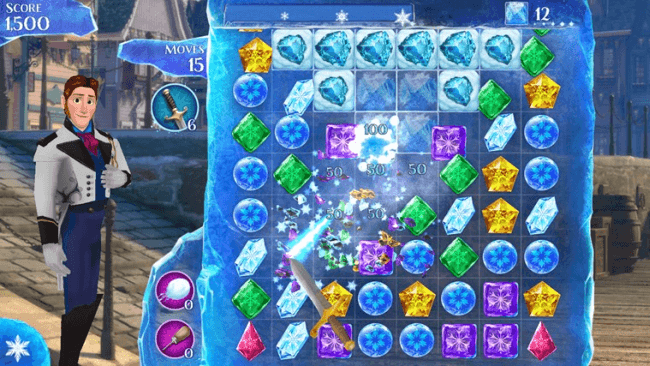 By many people’s reckoning, Disney’s Frozen might be one of the best animated films they’ve done in a while; even so, there’s nothing that says the movie’s ancillary products are up to snuff. Disney’s team knows how to market with things like dolls, toys, and clothing, and these days they’re reinforcing their cinematic brands with mobile games. Sadly, interactive entertainment is not their forte, as evidenced by the mediocre free-to-play match-three game Frozen Free Fall.

It’s no surprise that Free Fall tells more or less the same story as the film and banks on the film’s appeal. Starting with sisters Elsa and Anna, it sets you to removing the snow and frost slowly taking over the kingdom of Arendelle. There’s nothing earth (or ice)-shattering here; like a thousand other match-three games, you’re asked to achieve a set score or clear the board by matching three or more same-colored crystals. Also like other games in the genre, power-ups like Icebergs are created when you match four or five crystals; other power-ups cause entire vertical or horizontal rows, or rectangular groups of nine crystals, to explode. 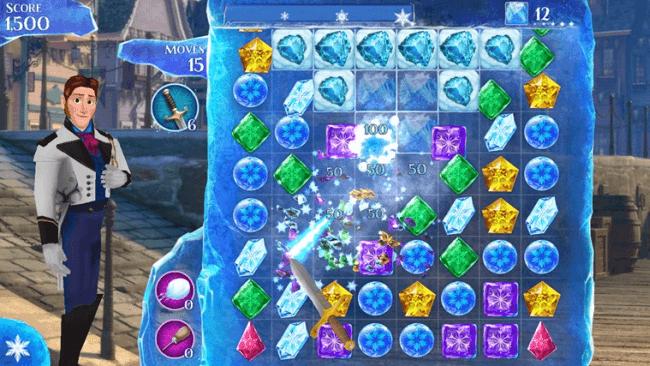 Disney tries to connect the game with the movie by including some of its imagery in the game’s backdrops, as well as its music. It also connects the two through the inclusion of various minor characters who appear here in the form of helpers. It tries to add some Frozen flavor by offering purchasable tools like Ice Picks that can remove a single tile, by scoring each level from one to three snowflakes, and by making you buy snowballs (which are used to add five additional moves if you come within a hair’s breadth of winning a certain level). The problem is all of this is window-dressing.

Under the hood, Free Fall is a clone of every match-three game in existence. It doesn’t try even a little to contribute something new to the genre or even to make itself especially memorable. There’s little sense of progression or creativity involved, let alone any cinematic moments, the inclusion of which could have made it a more worthwhile product. It plays like what it is—a cynical, quickly-made add-on marketing tool to increase public awareness of Disney’s latest animated feature. Ah well, at least it’s short. It contains a mere fraction of the levels found in games like Candy Crush. 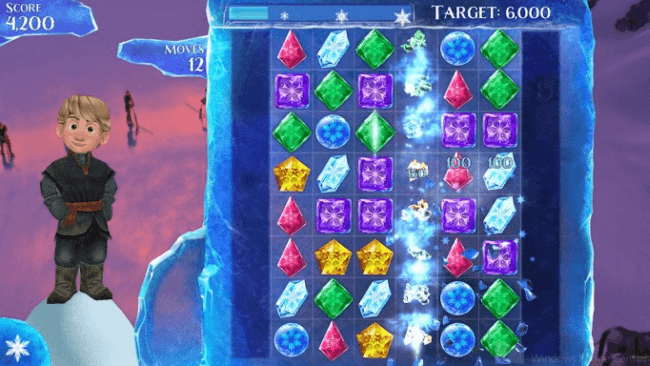 Unlike its charming cinematic counterpart, Frozen Free Fall is a definite disappointment. Although it has the advantage of Disney audio visuals, it lacks the magic that should be inherent to anything with the Disney name on it. Really the only reason you should bother downloading it is if you’re a kid under twelve, a Frozen fanatic, or a die-hard Disney defender.