Frontline Commando: WW2 Review – A Rank Above The Rest 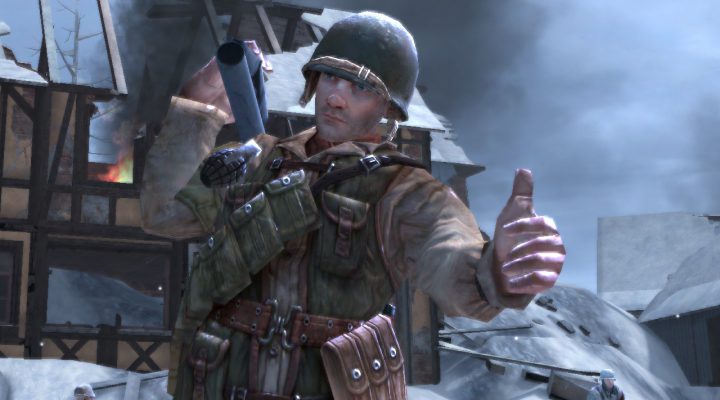 Variety of mission types and objectives.

Graphics could use additional polish.

My experiences with over-the-shoulder shooters on mobile have been average at best. From the clunky controls of Brothers in Arms 3 to the all-around dull Overkill 3, I have yet to play a shooter that I’ve felt comfortable completely recommending to my friends. At first glance, everything about Frontline Commando: WW2 looks to be another slog through mediocrity —from the World War 2 setting to the perpetual use of energy-based cooldown timers. But after spending some time with Glu Games’ third-person shooter, I can honestly say this is one of the most straightforward and accessible shooters which I’ve had the pleasure of playing on my tablet.

Frontline Commando: WW2 starts during the twilight of the second World War, during the Battle of the Bulge. If you’ve seen HBO’s Band of Brothers, you’ll know all about this particular event in military history. And if not, you don’t really need to know much as it just serves as a backdrop to the game (but I encourage you to do some homework because history matters). 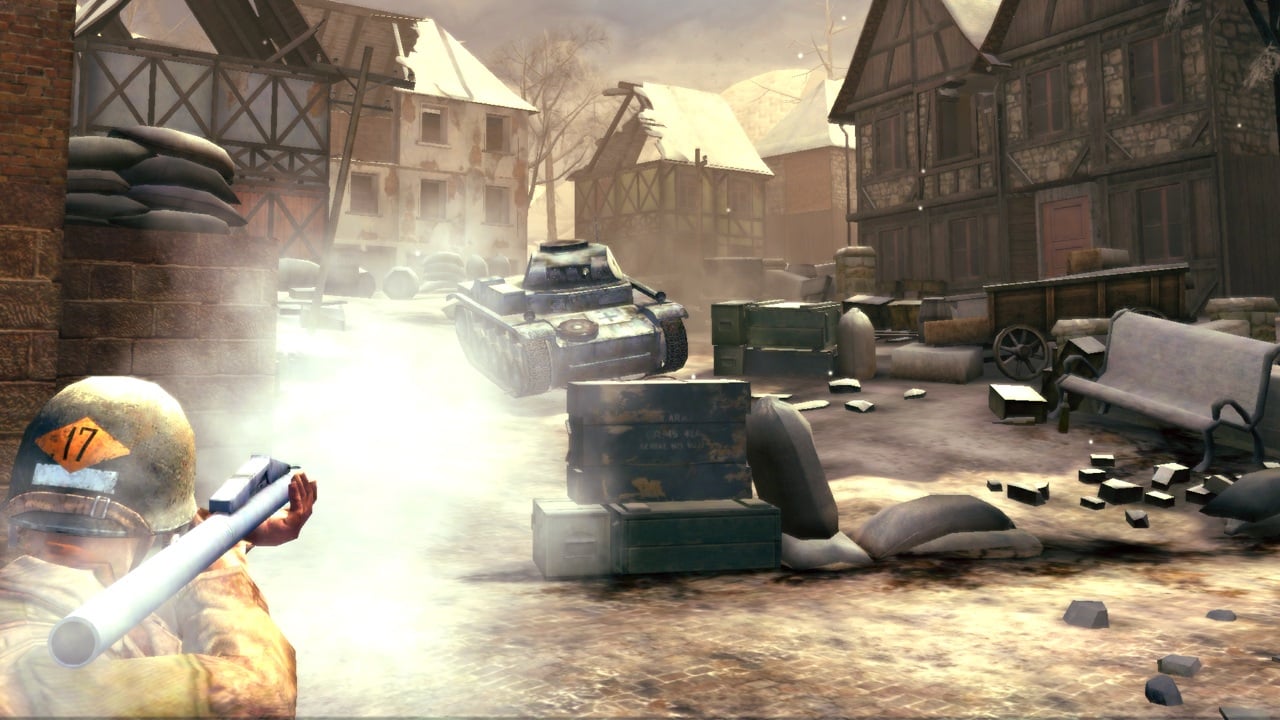 The game is broken into three “Regions”: the Ardennes (Battle of the Bulge), Germany, and then Italy. It’s odd to me that Italy is the third pit stop, since the Italian campaign, chronologically, came before the invasion of Germany. But that’s just how Frontline Commando: WW2 is. The game doesn’t really cares much for realism.

From making cars blow up by shooting bullets at them to the levels where I am given a bazooka and tasked with killing individual infantrymen with rockets, Frontline Commando isn’t exactly an authentic version of World War 2. And I’m okay with that.

The level variety in Frontline Commando: WW2 is decent, but in terms of goals you’ll either be killing all the enemies in a level, or a designated few. Obviously the latter is much shorter than the former, so level completion times vary from a few seconds (literally, some sniper missions task you with killing one target) to a couple minutes of dodging tank fire, destroying enemy artillery guns, and counter-sniping a German sniper.

It’s nothing ground-breaking, but it’s action-packed enough to have kept my interests well through the first region of the game. 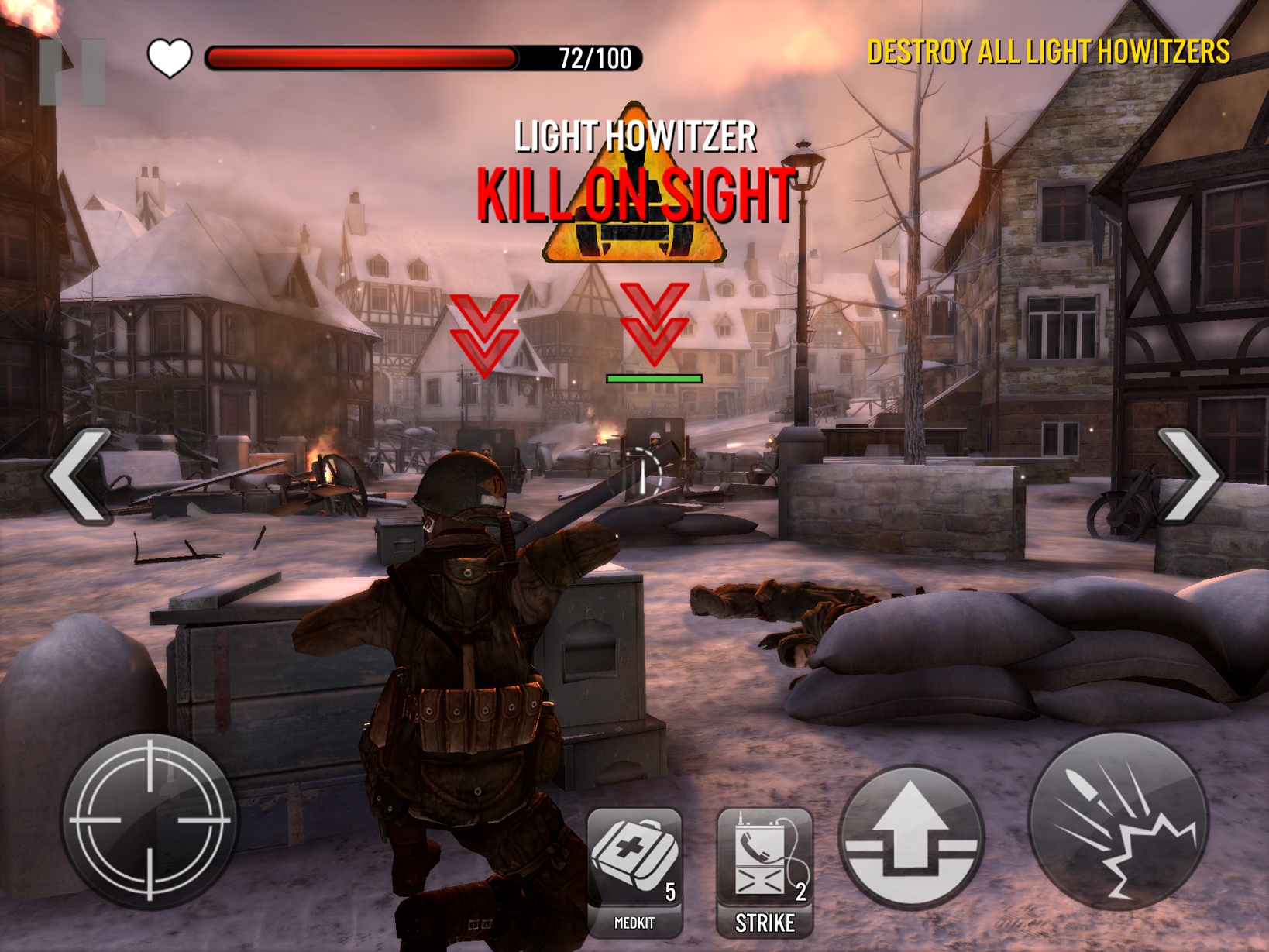 Frontline Commando: WW2 is a fixed-position gallery shooter, but some levels transition to different locations as the level progresses. What happens in these situations is that the player will complete a mini-objective and then the enemy soldiers will either surrender or all be dead, and the camera will lift up off of the current soldier, zoom down the street and around a corner and lock back down onto a new soldier, for players to continue the mission. It’s an easy fix that eliminates the clunky movement controls that I have experienced in previous touchscreen-based shooters.

The only real weakness came from the game’s visuals. While nothing was game-breaking, Frontline Commando: WW2 certainly would have benefited from an extra layer of polish. The landscape was clipping through objects, weapons were floating in soldier’s hands, the explosions were underwhelming, and some of the textures just looked rough. The game ran super smoothly, so I’d hate to think they simply forgot to check over the visuals a final time, but that’s certainly how it felt at times.

Graphical quibbles aside, Frontline Commando: WW2 is a solid third-person shooter that fans of the genre will not want to skip out on. Much to my surprise (and delight), it looks like you can make an over-the-shoulder shooter work on mobile.