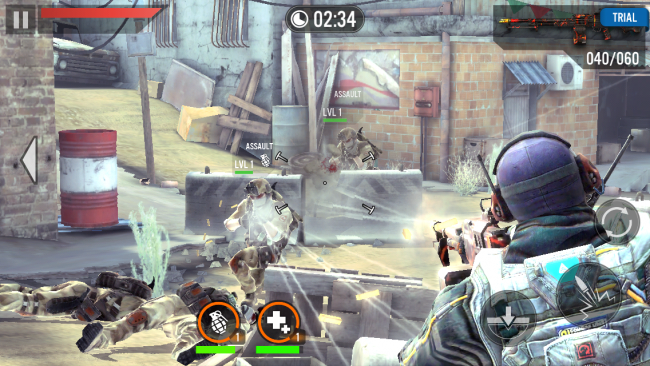 A love letter to firearms and chest-high walls

I’m new to the series, so I wasn’t entirely sure what to expect when I started up Frontline Commando 2 for the first time. In some ways it’s about what I expected: burly dudes that almost could have come from that one really popular game about throwing bullets at one another. But it’s also a well-constructed shooter that isn’t ridiculously heavy-handed with the in-app purchases. I’d even call it “a lot of fun.”

There’s a story behind the events of Frontline Commando 2, but it’s pretty much just a backdrop. Bad guys doing bad guy things has and will always be a great excuse. Each mission takes place in a fairly enclosed area with a few cover points and quite a few enemy soldiers to shoot at. There’s no open movement, however – players can tap arrows on either side of the screen to move to a new piece of cover in that direction (best used for avoiding explosives or getting a better angle for a shot), but that’s the extent of the movement. Instead, they’ll be using the on-screen virtual buttons to focus on aiming, shooting, and reloading. And not getting shot, obviously.

One of the benefits to this less open approach is that Frontline Commando 2 looks fantastic. The detail in the environments and characters is very impressive, as is the way little chunks of cover will get blown off during each firefight. It controls quite well, too. Not having to worry about direct movement frees players up to focus on nothing but their aim; and the faster they can pick off their enemies the bigger the combos they can rack up, which leads to bigger payouts. Payouts that can then go back into buying new weapons, upgrading those you already own, or training your squad mates (you can totally unlock and assign squad mates).

The little self-contained battles are also nice in that they tend to last just long enough to be exciting and rewarding without crossing over into ‘too long for mobile’ territory. This is the sort of game you could easily play while on the bus or the subway, and possibly even finish a mission or two between stops. This is doubly enjoyable because there’s no internet connection requirement for the campaign. Of course you’ll still need to be online in order to partake in PvP (versus an AI-controlled squad made up of another player’s soldiers). 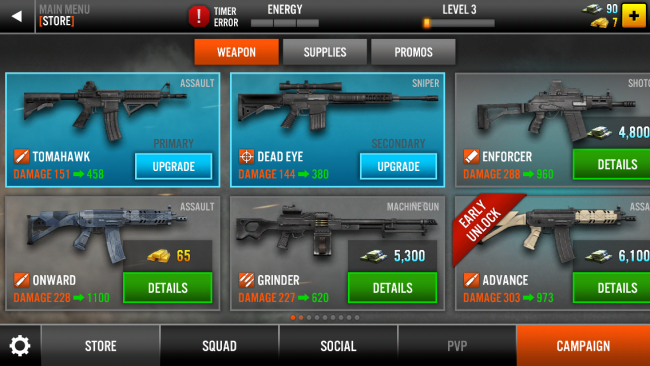 For all the fanciness of Frontline Commando 2‘s visuals, there are some noticeable hiccups with the animations. It’s only really a problem when using scoped weapons, but the occasionally janky movement will often lead to a missed shot – which isn’t all that great when using a sniper rifle with a 2+ second reload time. It can also be problematic to take on some of the game’s more difficult stages. Not so much because they’re more difficult, but because there’s no easy way to tell how much firepower is needed to stand much of a chance. Weapons that aren’t powerful enough will be displayed in Caution Yellow before starting a mission, but there’s no clear indicator of how much more powerful they actually need to be. Plus it can take quite a while to upgrade weapons. The improvements are quite small, but can cost many times more than what you’ll earn from completing a given stage.

In addition to that, there’s no real way of knowing if a mission is just ‘tough’ or ‘don’t even bother’ until you’re in the thick of it. Thankfully the recharging stamina meter is only tied to PvP, so you can try (and fail) the solo missions to your heart’s content. 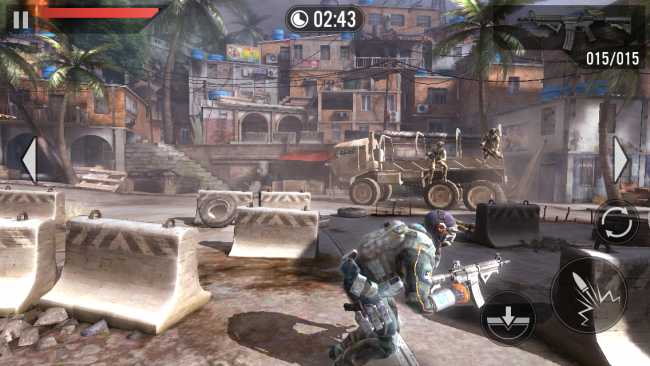 However the consumables (grenades, drones, etc) are pretty tough to come by, at least without using premium currency. Given their usefulness – and the occasional need to use them to earn all three of a level’s rewards – I really wish it were possible to buy them using regular currency.

Frontline Commando 2 is complicated enough to make maximizing your score a challenge, simple enough to enjoy in bite-sized bursts, and can be played just about anywhere thanks to some honest-to-goodness offline functionality. It could do with a bit more forewarning on the more difficult levels, and possibly some slightly more affordable upgrades, but it’s quite a bit of fun regardless.