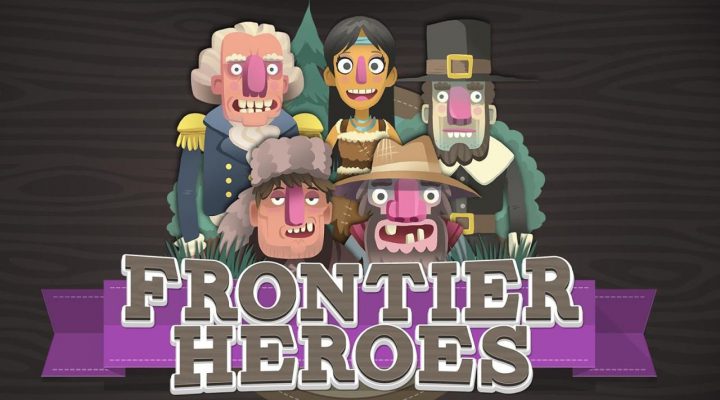 Some mini-games are very difficult to master.

Forced to unlock achievements to progress.

The two key ingredients to a successful educational game are that the game needs to actually teach something (things that have real-world applications, not just gun names and respawn locations), and, more importantly, the game needs to be fun or kids will not want to play it long enough to take anything away from it.

Frontier Heroes struggles with both ingredients.

Produced by The History Channel and A&E, Frontier Heroes features six levels that span from the days of the Native Americans all the way up through The United States’ Industrial Revolution.

Each level is broken apart into a handful of thematic mini-games that have players participating in various time-relevant activities. For example, in the first level, players throw tomahawks at targets and beat war drums. Later on in the Gold Rush level players pan for gold in rivers and hammer the transcontinental railroad’s golden spike into the ground.

Unfortunately, many of these mini-games aren’t worth a replay, and some of them are just downright difficult. The tomahawk mini-game, for example, requires players to tap the screen when the red dot aligns perfectly with the targeted object. The first target is easy, as the red dot moves relatively steady. By the fourth object, a pumpkin, the red dot is moving so rapidly that it took me about fifty tries to finally hit the pumpkin.

The tomahawk mini-game itself is not fun enough to warrant the fifty plays, I just simply wanted to see if it was possible to make that last shot.

Within each mini-game are DYK (Did You Know) achievements. This is Frontier Heroes spoon-feeding the player a one-sentence history lesson. The implementation of these DYKs is awkward, as sometimes you need to tap the screen where you see the DYK symbol to unlock it (while other times you unlock the DYK just by playing through the level). The DYK facts are at least interesting, and to the game’s credit you can go back and access them at any point, once unlocked.

Unfortunately, the game locks each level behind progression requirements. Players must find X amount of DYKs and complete Y amount of mini-game achievements in order to progress to the next level.

This forces the player to go back and grind through content that is already dull, or in some cases, downright frustrating. Did I want to replay Paul Revere’s laggy endless-runner ride through Boston? No…but I had to if I wanted any hope of unlocking The Frontier level.

Where many of the games are frustratingly difficult, some are blatantly easy. One of my favorite mini-games involved playing as a Davy Crockett-esque frontiersman wrestling a bear. Players had to tap either side of the screen in a set pattern in order to keep the pressure on the bear, and eventually defeat it. The game mode was so easy that I beat it on the first try, and finished unlocking the achievements on my second playthrough.

Even having mastered the bear battle I still needed more achievement points, so I begrudgingly went back to Paul Revere and tried to finish that mini-game’s achievements in order to progress to the Gold Rush level.

The level locks present two major problems: 1) They prevent kids who are interested (and thus willing to learn) in certain eras from accessing that content, forcing them to literally partake in dull chore games in order to unlock the levels they are interested in. 2) There is no reason for it. Let the kids play what they want to play. Turning the game into a chore is a great way to get kids to not want to play anymore. So what if they only want to play the panning-for-gold mini-game…don’t punish them by forcing them through another Paul Revere run.

To unlock the last level, the Land Of The Free level, I need 93 achievements unlocked. I forced myself to unlock as many as I could bear and I’m currently only sitting at 57. Kids may have more free time than an adult, but that doesn’t mean that developers should force kids to waste it by replaying mediocre, at best, content or it’s back to Angry Birds and Minecraft they go.

Frontier Heroes was a great idea, but it was ultimately poorly executed. What we have here is a collection of mostly forgettable mini-games sprinkled with interesting historical facts.