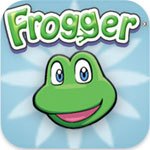 Pong. Pac-Man. Centipede. Tetris. Galaga. Burger Time. Ah, just thinking about all of those classic video games takes me back to those moments in time when I first discovered that our TV could be used to play a game (Pong). Or that I was actually good at something down at the corner arcade (Pac-Man). Or that I could beat the pants off my brother at a video game (Burger Time). Twenty five years later, it is wonderful now to see these classic games make their way onto my preferred gaming device, the iPhone. Like the other classic games of the 80’s, Frogger has always been one of my favorites. But the question is: does it work on the iPhone?

What’s not to love about Frogger? The objective is simple: help Mr. Frogger (who happens to be a green, hopping amphibian) across the busy street and equally dangerous river to safety in his lillypad home. When you play Frogger, you feel that wonderful combination of pressure to perform and satisfaction in seeing the result. You just can’t help but play it over and over again! You’re constantly afraid that your little friend is going to get squished. And as simple as it is, Frogger is actually a brilliant combination of arcade and strategy. Every move of the frog has its consequences because the obstacles and dangers are perpetually moving – sometimes in opposite directions, and you create your own path to safety.

The good news is, our friends at Konami decided to pack a lot of gameplay into this version of Frogger. There are loads of levels and they appear to be beautifully tuned to simulate the original in that you get more obstacles and distractions that are moving faster with every new level. Each time you’re able to put the froggy friends into their little homes, you’ll get a fresh, slightly different set of challenges.

The graphics are quite faithful to the original. The game oozes that magical, classic aura. Sounds appear to be the original arcade noises from those old versions back in the 80’s. It’s quite a thrill to re-live those ‘good ol’ days.’

Sadly, the game is not without a minor flaw. One of the challenges of taking great old games that were designed before any engineer was contemplating a “touch screen” device is that there is no ‘exact’ translation. In the case of Frogger, the controls are a bit difficult and unpredictable. There were times when I swiped my finger to move the frog a certain direction and the game interpreted my movement incorrectly. At least the developer gives you some options. You can swipe, tap or tilt to move the frog. Tapping didn’t work for me. Tilting is interesting but challenging especially in higher levels where the obstacles are moving fast. So, I settled on ‘swiping’ my finger as the preferred control mechanism. It works, but not perfectly.

So, would I recommend you buy Frogger? If you like unique, classic videogames, then emphatically, “yes.” At $0.99, it is a terrific bargain! It’s sort of like asking a classical music lover if she wants to hear another round of Beethoven or Mozart or Bach. There’s just something about the classics in any entertainment medium. They never seem to grow old.