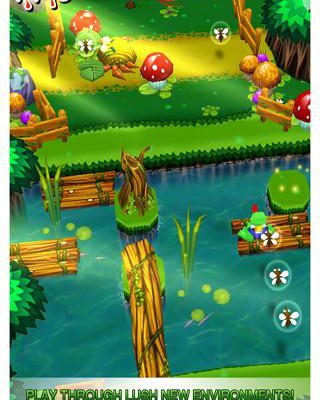 Frogger Decades is the best thing to happen to Frogger in… well, decades.

The video game industry and I are about the same age. I’m 30 years old. Last year, Pac-Man turned 30. This year, Frogger turns 30. To celebrate, Revolutionary Concepts (the team behind Gesundheit!, UFO on Tape, and the Frogger-inspired Banzai Rabbit) have teamed up with Konami to release Frogger Decades, a game so good that it makes me wish that the pair had helped plan my birthday party.

Frogger Decades takes the tried and true gameplay of Konami’s 1981 arcade classic and combines it with massive levels, topped to the brim with challenge.

Players will tap on the screen to move their frog in the direction they want him to hop, and he’ll only hop one space at a time – just like in the original. But unlike the first Frogger, where players just had to contend with heavy traffic and well-timed hops, players here will encounter an assortment of obstacles to overcome. The levels are elaborately designed and filled with many barricades, creating simple mazes of sorts. Different moving items – hippos, cars, rats – will get in the way, all while the screen slowly scrolls forward, forcing you to act quick or die in the process.

The game also introduces a number of new elements to the series, all of which are rooted in the unique capabilities of a touch screen phone (and, of course, a frog.) Players can hold their finger down and swipe to jump over a distance, shoot their tongues out to eat frogs, and even drag boxes around with their tongue to solve puzzles. This frog has plenty of moves now – all of which you’ll need to master if you want to make it through to the end.

Not since Frogger 2: Swampy’s Revenge hit the Playstation more than a decade ago has Konami’s classic character been this much fun.

In fact, Frogger Decades and the PlayStation rebirth of the Frogger franchise have a lot in common. Both take the gameplay found in the original coin-op classic and adapt it to exist in a world of brilliant level design. Unlike Swampy’s Revenge, though, Decades maintains a bit of a tighter playing field that emphasizes speed over exploration.

And for a game featuring a colourful mascot and classic, family friendly gameplay, Frogger Decades is one thing you’re probably not expecting it to be – hard. The levels here are exquisitely designed, but they’re done so in a way that absolutely maximizes the challenge involved. This means that Frogger Decades might not be your cup of tea if you’re not the kind of gamer that revels in the mantra “I’m not going to let this game beat me!!”

Still, despite its difficulty, Decades does plenty to relieve any frustration you might feel in trying to conquer its stunning stages. Not only are their frequent checkpoints in each level, but you’ll be given unlimited lives. In some games this can cheapen the experience. Here though – where it might take you 10 or 15 tries to get from one checkpoint to the next – it’s a welcome blessing. 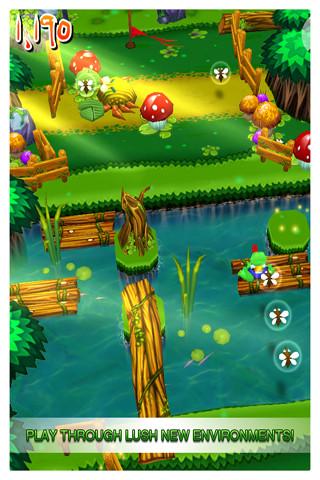 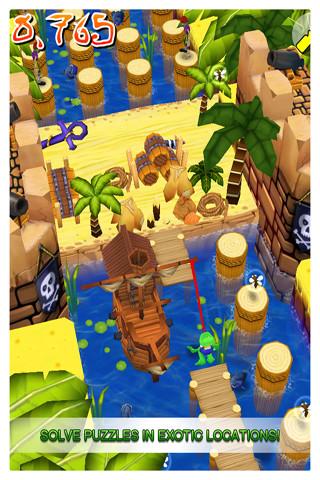 And at least while you’re stuck trying a certain tricky path again and again, you’ll be doing it surrounded by a charming presentation. Colors are vibrant, the music is catchy – everything looks and sounds its best throughout the game. Even the cut scene at the beginning is downright endearing in a Saturday morning cartoon kind of way.

The only real complaint to be had about Frogger Decades is that, when it comes to some of the new things your frog can do, the game doesn’t always respond the way you’d expect. This isn’t a problem that cropped up very often mind you, but it wasn’t unheard of for your frog to do things like jump when you wanted to eat a fly. A minor inconvenience at best, but frustrating when it happens at a crucial moment nonetheless.

Frogger Decades is the sort of game that Frogger fans have been waiting years for. Heck – maybe even decades. But it’s also a game that offers up a tremendous amount of challenge, so the easily frustrated need not apply. Still, if you’ve got the skills and the patience needed, Frogger Decades simply doesn’t disappoint.