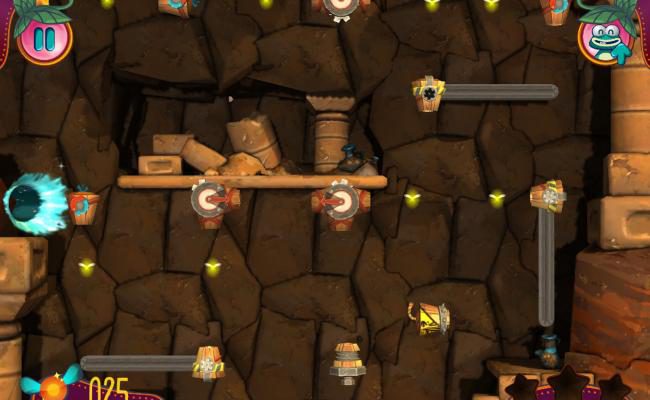 Frocket is a barrel of laughs, but frustration sets in quickly

Remember the bit in Donkey Kong Country where you fired from barrel to barrel, making sure not to smash into anything dangerous? Frocket makes an entire game out of that concept, replacing the famous gorilla with a frog on a jetpack.

And to a degree it works. Frocket is smooth, challenging and looks the part. Yet a jarring difficulty level coupled with awful collision detection means frustration levels soon rise above any potential fun we were hoping to have.

Frocket is a one-touch game – that is to say, the only control you have over the frog is to fire him out of his current barrel by touching the screen anywhere. This allows the game to focus solely on the barrel-play and mix up the types of shots you’ll be doing, as well as the obstacles that are scattered along the way.

Most barrels are stationary and swivel on-the-spot automatically to face a useful direction, but others moves along a set line, and some even explode if you’re in them too long. Then you’ve got spikes to worry about, annoying buzzy flies, spiked fruits that drop down to crush you, and more.

As you fire around the place, it’s notable how lovely Frocket looks. It’s comic-style 3D visuals on a 2D plane work wonders to give the game a real personality – the set-up could have felt rather generic in its execution, but Frocket‘s silly animations give it a certain edge.

Along the way there are stars to collect which open up further worlds, and fireflies that act as a sort of virtual currency. Grab enough of these, and you can buy special items that make the going fair easier in places.

Everything’s looking good for Frocket then – but unfortunately, this soon turns out not to be the case, as poor design ultimately leads to frustration. 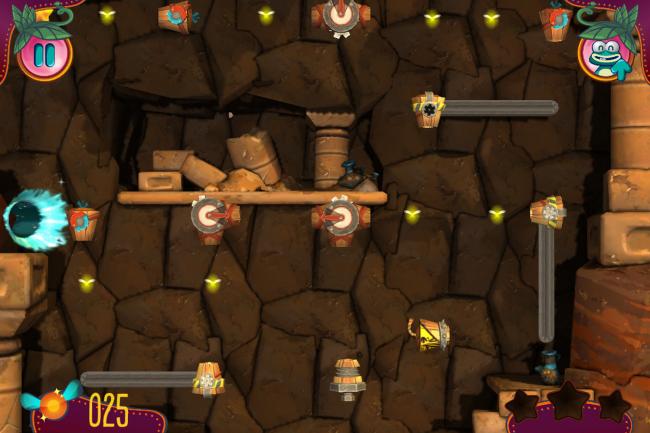 First up, there’s a lack of focus when it comes to how you’re meant to approach the game. Some sections require you move quickly to dodge falling items and incoming enemies, while others want you to take your time and consider your options. This is all well and good, but the requirements are mixed together much too closely. You’ll be firing rapidly through a section one moment, then suddenly find yourself hitting an obstacle, as the game wanted you to hit the brakes all of a sudden.

The opposite also happens, as we found ourselves one moment taking it slowly, then suddenly getting hit from above. It feels jarring, and really it would be much better if there were slow levels and fast levels, rather than both throwing in together.

It wouldn’t be too much of a hassle if we could restart the level quickly, but every time you die the game needs to load again for a few seconds, then it drags the camera through the level to show you what you can expect, then finally lets you off the leash to try again. These pauses between play really break it up and pull you out of the immersion.

To top if all off, the collision detection is awful. Clipped the wing of a blue bottle fly? You’re dead. Touched the very tip of a spike? Dead. Numerous times when we died and the action stopped, we could see that our frog wasn’t even touching anything bad at all! A bit more leniency is definitely required.

Frocket isn’t a bad game by any means – the concept is solid, and it’s all been well put together. Rather, there are a number of niggles that come together to create one almighty problem that takes away from what the game could easily be.