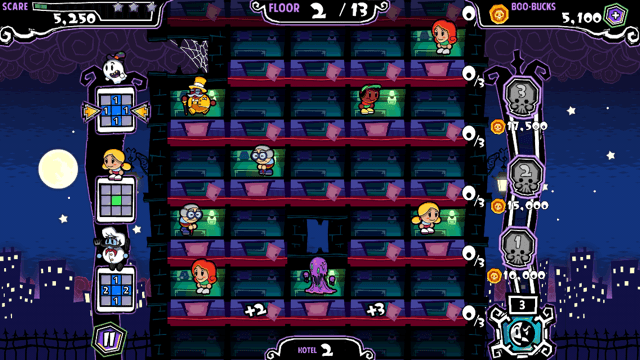 A lot of justifiable complaints are leveled against modern games’ obsession with tutorials. Those of us that grew up plugging a cartridge into an NES and then praying for clarity tend to get impatient with hand-holding and long-winded instructions. While brevity is certainly preferable with tutorials, we still need to learn how to maneuver around a title (especially since today’s games don’t come with printed manuals—remember those?). If we misunderstand a game’s mechanics, we might become irritated and put that game down forever.

Fright Heights is a rare example of a game in need of a fleshed-out tutorial. It’s an initially befuddling puzzle title that provides some cute and creative brain-bending once you get the hang of it – but the learning process is totally on you. Frustration, not ghosts, is what might wind up driving you away from these haunted halls. Look up online tutorials if necessary, and persevere. It’s worth it.

Fright Heights takes place across several run-down towers that are populated by various ghouls and ghosties. Humans have begun snooping around the area, because our species lacks the survival instinct that helps smarter animals pay attention to big fat “KEEP OUT!!!” signs. It is your duty to set up ghosts and scare away the warm-bloods.

Fright Heights is a little bit Sudoku and a little bit Tetris. The right side of the screen is occupied by the multi-level tower, which is essentially your game board. On the left side, there’s a line-up of people and ghouls. Each monster is surrounded by different numbers that indicate its scare factor. The location of the numbers technically give the monsters a shape: some have a value above and below, some have values on all side, and so on.

When you place a monster on the board, the surrounding rooms are appointed values according to the monsters’ numbers. When a human is set in one of these marked rooms, they become frightened. When the number of scared humans equals the total indicated on each floor, they scream and run. When you boot all the human invaders out of a tower, you move on to the next. If there are still humans remaining when you reach the top floor, you must try again.

Ideally, you want to chain your scares. Upper floors can’t be cleared until the lower floor is swept away, but if you place monsters and humans carefully, you can trigger a very satisfying chain reaction. There are also talisman power-ups that can boost the amount and value of numbers surrounding a monster, thereby making it more efficient at scaring. 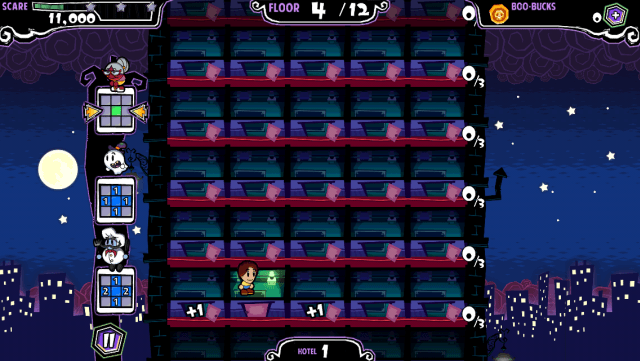 Once you get the hang of Fright Heights, it’s highly addictive. It also provides a decent challenge without being unfair; even though the talismans are obviously available to farm in-app purchases, they’re not necessary. Brain power, forethought, and a decent dash of luck will get you through most levels. Still, the game takes a lot of getting used to thanks to its quick tutorial. You’re also bombarded with constant requests to sign onto Facebook, which gets old, fast.

There’s also a bit of controversy trailing the game like an evil shadow: aside from its Halloween theme, Fright Heights plays a good deal like the 2011 puzzle hit Megacity – a little too closely, according to Megacity’s creator, ColePowered.

Overall, Fright Heights has some creaky floors and broken windows, but it offers a chilling good time, nonetheless. Grab it and play it in between handing out fistfuls of candy to the rugrats this Halloween season.