A few cards short of a royal flush.

Poker games aren’t that hard to do, but they are tricky to do in ways that make players feel like they’re getting something like the Love Boat theme. You know, exciting and new. That doesn’t stop companies from trying, though, and Idle Gaming might be onto something with Fresh Deck Poker, its attempt to up the ante on what’s come before with improved production values and tournaments that offer real cash prizes.

The first thing that Fresh Deck Poker asks you to do is to create your avatar, which for some reason has to be done initially by randomizing its appearance. Once you get around that minor inconvenience, you’ll find that avatars are customizable in terms of body type and wardrobe using either the chips you also use to actually play cards, or gold, the game’s premium currency.

That might not sound like a big deal, but it’s significant because the game’s graphics are impressive – possibly the best I’ve seen in any poker game. The default view at the tables is a first person perspective, so you’ll get to see other players’ avatars up close and personal. You can also choose for a more traditional overhead view of the action, but you probably won’t want to after seeing the superb visuals.

Grabbing an open seat is easy thanks to the “Smart Seat” feature. All you have to do is pick a game type (ring game or Sit-N-Go), a game mode, and your preferred stakes, and you automatically receive the next spot that fits your parameters. The wait times are short, and you always have the option of using the easy-to-navigate menus to hunt for your own seat if necessary.

Once you hit the felt, the interface is simple to understand and use. Action buttons allowing you to pre-select options to call, raise, check or fold are at the bottom of the screen, along with a chat window that can be set to show player chat, dealer play-by-play or both. A slider and buttons make sizing bets a breeze, and you’ll get an audible warning whenever you are running out of time to act.

Social features are also nicely woven into the action at the table. You can hover over other players’ avatars to see their player levels and use buttons to add them as in-game buddies or send them gifts. Chat appears in comic book-style bubbles, making it easy to see who said what, though this can also be toggled off if you find it too distracting.

Every hand you play earns you experience points, and hands you win grant you even more. You’ll find it easy to level up early on, adding more chips and gold to your stash. Additional clothing and backgrounds also unlock as you level. 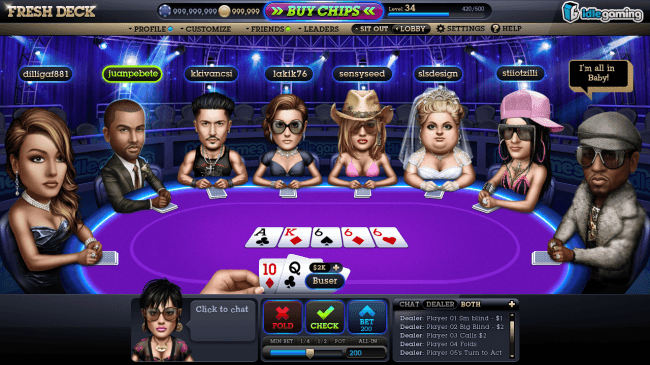 So far, so good, but it’s not all aces for Fresh Deck Poker. When you first start playing, you’ll find yourself besieged by Facebook notifications from people you don’t even know. This isn’t necessarily a bad thing, as you can exchange spins on the daily bonus wheel with them, but it can be an annoyance to see it happening constantly. You’ll also see your Facebook friends arrayed across the bottom of the screen to make it look like they are playing – complete with fake chip counts – which is a tactic better left to lesser social games. Add in the pop-up windows and the game asking you permission to check your friends’ likes to see if they enjoy poker and it starts to be a bit much.

On top of that, two of the game’s most promising and enticing features aren’t active yet. A mobile version that promises seamless transition between tablets or smartphones and the Facebook edition hasn’t arrived in the U.S. App Store. Another potentially huge hook, the ability to play multi-table tournaments for real money prizes, is also M.I.A., possibly waiting for the player base to grow.

That’s understandable, but since Fresh Deck Poker is live right now, it’s hard to say the first wave of players is getting the full experience. This is social/mobile poker with five-star potential, and it’s easy to see why people in the industry were excited about it. Until we see the game reveal all of its cards, though, it’s difficult to know for sure if it’s going to be all it can be.