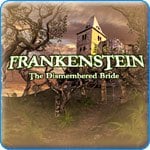 Now here’s an idea for a hidden object game that you don’t see every day: A young woman named Janet is kidnapped by a mad scientist (named Frankenstein), who carves her body into pieces with the intention of using them to create a bride for himself. It’s up to Janet’s fiancé Brad, with help from Janet’s disembodied brain, to find all her body parts and repair Frankenstein’s machine so that Janet’s body can be put back together.

Believe it or not, the game is actually not quite as gruesome as it sounds. You never get to meet Frankenstein himself; instead, you just sneak around his bedroom, laboratory, kitchen, and other parts of the castle. Gameplay-wise, Frankenstein: The Dismembered Bride a standard hidden object search where you explore the various rooms of Frankenstein’s castle and scour each cluttered room for a specific set of items from a list. The final item to find in each room will be one of Janet’s body parts, like a leg or an arm, and later you’ll also need to find pieces of a machine. There are unlimited hints, provided you don’t mind waiting a few seconds for the hint meter to recharge.

While the unusual plot might appeal to those with a fondness for the macabre, it’s not campy enough to be really entertaining. In fact, the game isn’t really all that memorable at all. Objects are sometimes indistinct and hard to find – especially when you’re asked, for example, to find all of the white wine bottles in a wine cellar full of a hundred different bottles, but the only thing differentiating the white wine from the other bottles is a red stripe on the cork. The game isn’t terribly well-organized either, so you’ll spend time backtracking through rooms until you happen to find one that’s "searchable." (Thankfully, the castle isn’t that big.) Another peeve is that often you’ll find the body part or machine piece right away, but can’t pick it up until you’ve collected a bunch of other useless junk first.

The game’s fatal flaw, though, is its length. It shouldn’t take you much more than 90 minutes to play the whole thing from start to finish – maybe even less if you’re a pro at hidden object games. Combined with the lacklustre presentation and story, Frankenstein: The Dismembered Bride is just a disappointing experience all around.