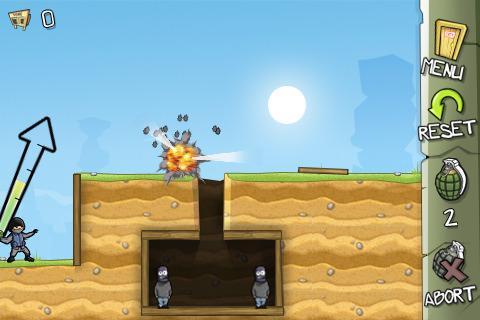 We get a bad case of grenade-tossing deja vu.

Porting to the iPhone is a good way for a developer to take a game and expand its audience. In the case of Sushi Go-Round, developers also looked at the presentation and gave it a good coat of spit and polish. But with Fragger, the latest Flash-to-iPhone port by MiniClip, while the game itself is good is it really worth paying for something you can get for free and better?

Fragger is basically Angry Birds, but simplified and with a lot less charm. (In fact, some players may not appreciate the violent theme in Fragger. It’s not gory, but it’s not very comical either.) You play as a grenadier, launching grenades at enemies who stand around in different situations. It’s up to you to lob a grenade to explode near them – or trigger other bombs – to blow them to smithereens. Controlling the throw is as easy as touching your finger to the screen to aim and slide a power indicator on the arrow, then letting go.

Helping propel the grenades is a solid physics engine that sends enemies, crates and other debris flying as you’d expect. In your favor, grenades tend to have a bit of a generous roll. Their range, too, is also generous, and you can always tell that the “potato” will do its job by a panicked look on the baddies’ faces.

Fragger has a good number of challenges to it with 40 levels, each of which has three difficulty levels. Unlocking a higher difficulty also nets you abilities like throwing multiple grenades at once.

The graphics in Fragger are nice and bright. You can definitely tell when the grenade hits, and explosions are satisfying. The music in-game is quiet and non-intrusive. Again, there’s nothing really bad here.

The real issue with Fragger is the lack of any significant change between the Flash game and the iPhone game. The graphics may have a bit more color to them, but the original Flash game and the iPhone game are pretty much identical. The levels are re-shuffled a smidge – level six in one version is level seven in the other, for instance – but otherwise you’re not really getting anything new. Plus controlling Fragger with a mouse on a larger screen feels much more precise than the iPhone’s touchscreen. The game feels snappier too, with smoother animation and more reliable controls. It’s also easier to guesstimate distance and power in the Flash version.

Finally, with services like Crystal or OpenFeint available to developers, there’s very little reason not to have any kind of unlockable achievements. Even the online version has them, so why they weren’t ported over to the iPhone version is a mystery.

It’s not that Fragger is a bad game; in fact it’s quite good. The later puzzles never make you want to pull your hair out but they will make you think. But with options like Angry Birds available and an online version of Fragger that’s free and plays better, it’s a difficult recommendation to make. If you crave more puzzle and physics gameplay on the go, do consider Fragger. But know that there are other options too.