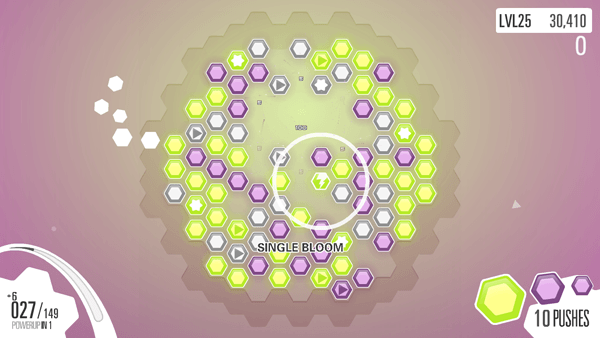 Cipher Prime’s melody-driven Auditorium was one of the most understated indie gems of 2009, beautifully combining puzzle elements with sweeping, layered piano and string tracks. Fractal is very much in the same vein, although the music takes a back seat this time around. With clever game mechanics and plenty of different modes to play through, Cipher Prime’s latest is definitely worth experiencing.

Presented with a hexagonal grid, your task involves pushing same coloured shapes into one another and creating ‘blooms’ that consequently explode and push surrounding blocks in all directions. Each level requires you create a certain number of blooms with a maximum number of pushes.

Extra points are awarded for being especially clever. For example, if an exploding bloom causes a chain reaction of extra blooms, you’ll earn more points. Larger blooms made up of more than seven hexagons will also bag you points galore. String a combo of huge blooms with chain reactions and ‘afterblooms’, and you’ve got a whole heap of points on your hands. Achieving a large combo feels amazing, as blocks explode all over the screen and you’re given complimentary one-liners.

Levels start with a simple drum beat and possibly a bass line, but as blooms explode and pieces are pushed about the board, the song builds up to a gallop, and huge combos will cause the full song to emerge. On the flip side, as you get closer to losing the level, the music will begin to slow down, before grinding to a halt. It’s a lovely use of sound, not that we’d expect anything less from Cipher Prime!

What’s really lovely is that Fractal never rushes you. There is no time limit, and instead you’re given as long as you need to decide what your next move will be. Hunting down and planning your next big chain reaction is great fun, and you’ll be left feeling very pleased with yourself when a clever plan works out well. 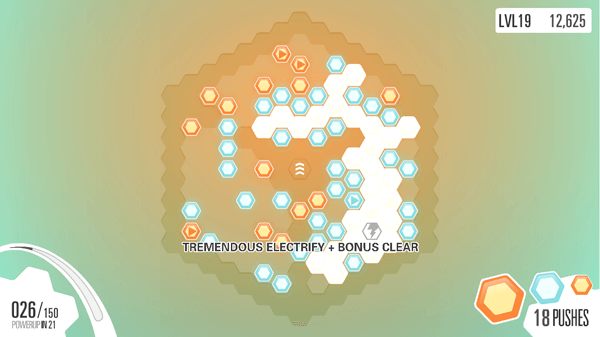 After around 15 minutes with the game, you’ll wonder when exactly it’s going to get difficult – and that’s when extra colours are introduced. Levels with two or three different coloured hexagons can prove to be rather tricky, and you’ll be scratching your head trying to figure out the best course of action. Again, the lack of pressure means you can really scope out the level and plan your next move to the fullest.

There is a slight problem with the general puzzle mechanics. After each bloom explodes and a combo ends, extra hexagons randomly spawn all over the board. While this can be great in some circumstances – potentially continuing a combo if a bloom is produced – it can also completely ruin a move you were about to make. It’s a little strange that this randomness is included, as it doesn’t seem to fit with the rest of the game’s shrewd design.

Apart from the main Campaign mode, there is the hard-as-nails Puzzle mode and the timed Arcade mode. Puzzle mode supplies levels of increasing difficulty that each have set missions, such as ‘clear the board’ or ‘create a chain reaction’. Starting off relatively simple, they soon become devilishly difficult, and only the most patient players will successfully complete the lot. 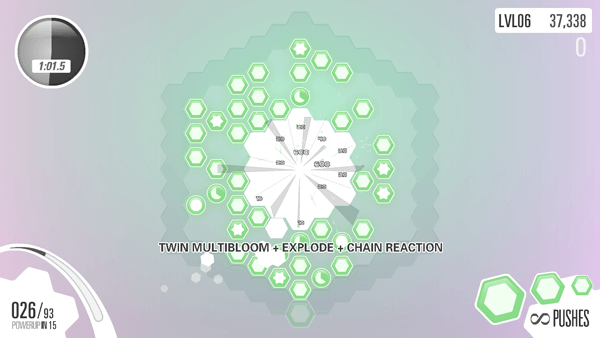 Arcade mode plays out in a similar fashion to the main Campaign levels, except with a time limit involved. Creating as many blooms as possible in a set time is the key to bagging the high scores. Both these game modes, especially the Puzzle variation, add that extra bit of spice to proceedings and make the whole package feel far more meaty.

Fractal is a fantastic puzzler, providing thoughtful, slow-paced action that’s perfect for kicking back and unwinding with. It will certainly provide a challenge, but is also simple enough to entice more casual players. Make sure to check out the online demo at the very least.