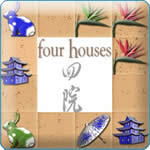 With its storybook backdrop of warring states, feisty general-kings and an age-old, opulent culture, ancient China makes a fine setting for any electronic amusement.

The latest to take advantage of the period’s rich historical context and stunning imagery: Four Houses from Oberon Games, a delightful little puzzler that’ll simultaneously set your imagination ablaze and mind at ease.

The basics in a nutshell: You’re presented with grids of varying size and shape filled with a set number of empty squares. One by one, you must place appropriately-themed objects (pagodas, rabbits, lanterns, cranes, rice bowls) into these open spaces.

Note: While it is possible to see a few items ahead, objects are randomly generated, only one is available at any given time and you have to work with them in the order they’re presented.

Stretch a row of three or more similar objects or like-colored items from one end of the board to the other, and they’ll disappear from the playfield, while points are awarded. It’s also possible to make matches based on the number of objects contained in any symbol. (For example, pairing a row of two lilies, two fish and two vases is also perfectly kosher.)

Starting out, you’ll chose between one of two play variants.

Journey mode offers a stroll atop a gorgeous, seemingly hand-painted watercolor map where seasons change and the action’s broken down into bite-size, standalone brainteasers. Making matches causes squares to fill with coins, and when all are filled, you’ll proceed to the next level.

Timed mode is also laid out like a marvelous quest, but you’re tasked instead with filling a meter to win each scenario. Mind you, the meter slowly drains with every passing second. Only by matching objects can you cause it to grow. The fancier the match – naturally, combos are possible which incorporate shapes, colors and even multiple rows – the better the payout.

Stone tiles cannot be removed, and hence block your progress. Bamboo-covered squares must be incorporated into a match three times before you can claim victory. Bonuses such as the sweeper eliminate any object from play, while others such as the joker (a happy-faced mask) may be used as wild cards compatible with any other item. Don’t forget ink pots that change the color of various symbols either, or special variations on the extras above capable of affecting entire rows.

A surprisingly taxing affair, the challenge here comes from having to plan several moves ahead.

Remember: Any piece you pick up has to be put somewhere. Forced to work with the playing pieces you’re given, but faced with limited space and/or dwindling time, every action can potentially be your last. With only three lives offered – you lose one every time you run out of options – there’s sufficient incentive to keep banging away, even as you give your gray matter a workout.

Stress isn’t an issue, though.

Certainly, action game fans won’t appreciate the laid-back pacing. Nor will those seeking whiz-bang special effects be drawn to the title. But it’s hardly an issue – the type of game players of all ages, skill levels and genders will quickly cotton to, it offers a pleasing alternative to faster-paced, more intense competitors.

A superb way to kick back, relax and put stress on the backburner after a long day at school or work, we’d be surprised if this one didn’t immediately connect across multiple generations. So don’t be surprised if Mom, Dad or even a business associate tries to muscle in on your musings.

What can we say? The perfect antidote for a long, hard day at home or the office, Four Houses deserves a rightful place in yours.