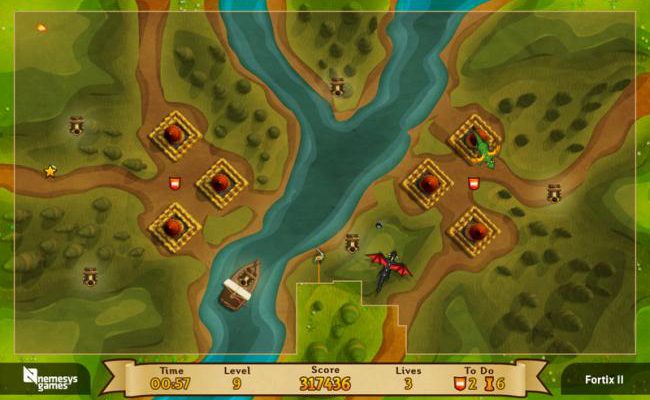 Fighting dragons with a fence can be just as much fun as using a sword.

Contrary to popular opinion, it turns out that enchanted swords and magic wands aren’t the best way to fight dragons and other monsters of legend. Believe it or not, the best weapon is apparently a simple fence. Yes, once these beasties are surrounded by nothing more than some cyclone fencing, they no longer pose any sort of threat to hapless civilians or brave heroes. Dragons, it turns out, are kinda stupid. Or, at least, they are in Fortix 2 a delightful new game for the Mac.

Fortix 2 is a “fence off” game, where players control a knight and use him to capture territory on a map by running across open spaces and drawing a trail behind them. Both arrow keys or a mouse can be used to control the knight’s path; though the mouse is a bit more frustrating to use because it doesn’t offer as much control as the keys do. When players form an unbroken shape with their trail and the borders of the map, the section that they’ve just framed falls under their territory. Players can also capture sun flowers and power-ups like speed bonuses along the way for extra points and abilities (like temporary speed boosts).

There’s a fairly epic story in this little game, one full of evil wizards, fearsome monsters, and brave knights. Here’s the gist: a couple of years ago, an evil wizard named Xitrof threatened the land, only to be defeated and imprisoned. However, Xitrof manages to escape his cell and threaten the world again, which means that it’s up to the players to save the kingdom. Again.

However, this is easier said than done. Players have to face off against castles with cannon towers, and opponents like dragons and trolls. If any of these threats touches a trail before players close the circuit, the knight will die and players have to start over again from the last border point they were standing on; if this happens three times, the level’s over and has to be restarted from the beginning. 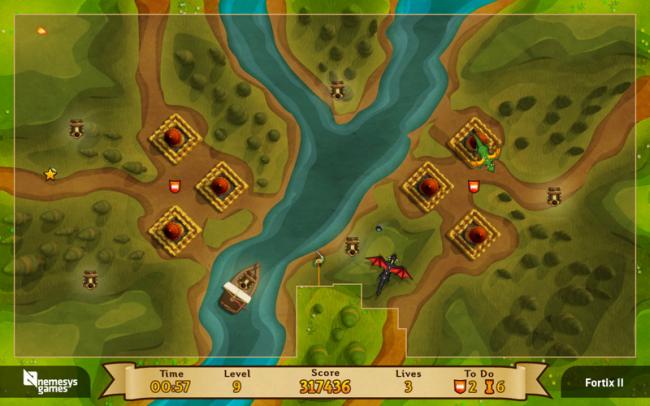 Apparently the knight went to the Goat-Herding School of Heroics, because the only way to deal with these threats is to fence them in, too. Well, the cannons can be fenced in, technically, but it’s a pain to do because they’re usually able to shoot the trail before the area can be closed off. As a result, it’s easier to just capture random catapults on a map and let them take out the enemy cannons on their own.

Visually, the game won’t exactly wow folks, but it’s plenty charming. The 2D, top-down, graphics are simple and abstract. That said, the colors are bright, the designs are clever, and cartoony style works really nicely here. On top of that, the movement is all really smooth.

The sound effects are also really solid, but they’re nothing to write home about. Additionally, the rather lovely soundtrack feels appropriate for the medieval setting, too; that said, it stays firmly in the background and never really stands out, either.

The one main problem with the game is that there’s not a lot of bang for your buck. If players are really dedicated, they can easily tear through the campaign in less than a day. That’s a shame, since the gameplay is fun and rather addictive, which means that the adventure’s likely to be over before players are ready to walk away from it.

Overall, Fortix 2 is a surprisingly fun, challenging little title that has something for everyone. It’s definitely simple enough for kids to get the hang of, but can provide enough of a challenge to keep adults entertained too.