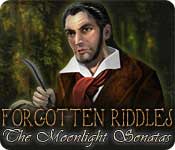 It’s getting harder for hidden object games to stand out when compared to successful blockbusters like Mystery Case Files and the Dream Day series, but one game that definitely deserves some recognition is Forgotten Riddles: The Moonlight Sonatas. Through clever riddles, a compelling story and admirable attention to detail, Blue Tea Games and Big Fish Games have created a sweet, if slightly short, seek-and-find adventure.

Like its predecessor, Forgotten Riddles: The Mayan Princess, this game does a wonderful job of fusing hidden object gameplay with the intriguing tale of fictional 19th century composer Francis von Amadeus. The Moonlight Opera House, where Francis lived and worked, has been abandoned for some time, but locals say they can hear beautiful music from it and see a ghostly figure standing on the balcony. As an inspector, you’re given access to Francis’s journals in the hope that you can solve the mystery.

Two modes of difficulty are available; a normal timed mode called Archaeologist, and an Apprentice mode that gives you more time, extra hints, and a special alternate ending. Players then make their way through the game’s 10 chapters, each of which involves investigating various rooms in the Opera House like the stage, front gate, composer’s room, nursery and library.

At the bottom of the screen are a series of musical notes; clicking on one reveals a riddle that represents one of the objects you need to find in the scene. For example, "You’ll be down on your luck after I cross your path; when I swipe my claws, rats will feel my wrath," means you need to look for a black cat. If you get stuck, you can switch to another room or use a hint that reveals extra info about the item’s location. You don’t have to find every clue in order to move on.

Being the second game in the Forgotten Riddles series, there are several similarities between The Moonlight Sonatas and The Mayan Princess. However, The Moonlight Sonatas does a few things significantly differently as well. There are no longer mini-games every few levels; instead, you’ll get the opportunity to play an optional tile-matching game in order to earn more hints.

Also, some extra room types have been added besides the basic seek-and-find with riddles. Interactive riddle rooms involve solving Dream Chronicles-style puzzles by picking up items in the scene and using them on others (like using a match to light a fireplace), deciphering clues and clicking on objects in the environment to interact with them.

Then there are Secret Room puzzles. The goal here is to place objects back into the scenery, which causes the scene itself to change and evolve. For example, in the stage scene, putting a gear into a gearbox and attaching a sandbag to a rope causes the red curtain to pull away and reveal a wonderful scene of a Viking ship preparing to do battle with a sea monster. When you return to the scene a second time, it will be permanently be split into a kind of "before" and "after" phase that have different items to find in each – you must flip back and forth between them to find everything on your list.

The new puzzle rooms are cleverly designed and much better integrated with the gameplay than the usual tacked-on mini-games. Another positive thing to note is that even though the scenes themselves frequently repeat, you’ll hear more than one clue for the same item – a nice touch that helps keep things fresh.

Forgotten Riddles: The Moonlight Sonatas embraces the 19th century theme with gusto. Everything from the elegant piano music (you won’t want to turn the music down in this one) to charming, exquisitely designed scenes with items that are (mostly) true to the time and setting, and a poignant story told in frequent flashbacks.

If The Moonlight Sonatas has a fault it’s that, like its predecessor, the game is on the short side. However, the alternate ending at least gives players a reason to play the game twice. It’s not the kind of game that will engross you for weeks or months at a time, but it’s compelling fun while it lasts.