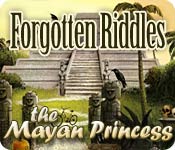 Consider them “Where’s Waldo” for the 21st century. One of the most popular genres in casual game space is the “seek-and-find” or “hidden object” games, where players must find a number of well-hidden objects in a cluttered scene, within a predetermined time limit.

The latest offering is Big Fish Games’ Forgotten Riddles: The Mayan Princess, which does a great job fusing game-play with a compelling story about the fate of a Mayan royal family in the 16th century. Without giving too much away, your goal is to uncover a mystery by reading journal entries written by a princess, peppered with details about the events of the time including the Spanish Conquistadors invading the Yucatan Peninsula.

Players first chose to play in one of two difficulties: Archaeologist (normal, timed mode) or Apprentice (extended time, extra hints). Players will then click on one of the three or four available “scenes” out of a total of 26. A scene might be a Mayan jungle, inside a temple or mountains at sundown. At the bottom of the screen will be a number of runes, number 1 through 9, and each one will give you a clue as to what object you need to find on the screen.

For example, one such riddle might be “You’ll find I mark time with no tick or tock; It’s with sand that mimics a modern day clock” and so you’ll look for an hourglass to click on. Another example might be “I’m a small and sweet fruit cultivated on a vine, and I’m frequently used to make jelly or wine.” The answer, of course, is a bunch of grapes. You can answer any of the rune riddles in any order you choose and you don’t need to answer them all in order to move onto the next scene.

Click on incorrect objects a few times in a row and you’ll be penalized by time taken off the clock. If you need some help you can click the Hint button for extra info such as “Look for cloth with multiple eye paintings.”

Every few levels or so players will be treated to two kinds of mini-games. One is similar to the main game but has you reading a riddle and then dragging and dropping tiles onto the correct spot on a grid. Click “Unlock” when you think all are in its correct place to see the results of your decisions. Another has you rotate puzzles pieces so that an entire row or column of five pieces is in its correct position, which then locks it into place. Do this with the entire picture and it reveals a picture and journal information.

Everything is tied into this Mayan theme, from the lengthy story to the attractive locations and characters (a memorable “flashback” scene has warriors standing around in a conference).

The biggest issue with Forgotten Riddles: The Mayan Princess is the limited replayability. That is, there’s only one game mode and if you play the game again – something I tried under another player name – it plays out in a very similar fashion with some of the same clues repeated on the first level, while other riddles and objects I saw in other levels. Yes, a casual game is only $20, but some games simply offer more bang for your buck.

But hidden object fans will certainly not be disappointed with Forgotten Riddles: The Mayan Princess thanks to its clever riddles and intriguing story, but don’t expect more than a weekend of play from this very good game.