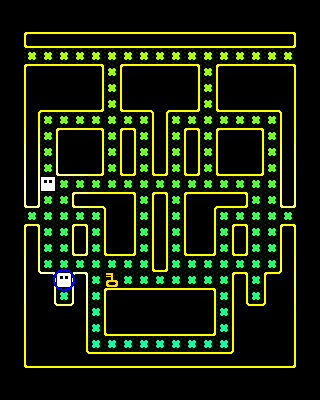 Pac-Man has been around since the very beginning of this whole thing we know as video games, so you can kind of imagine that it’s a bit hard to keep something like that engaging and relevant in today’s marketplace. Most of the time companies try to do a Pac-Man “thing” it fails. But Namco succeeded with Pac-Man Championship Edition, THQ with Treasure Grab, and now Nyarlu Labs has succeeded with Forget-Me-Not.

What makes Forget-Me-Not fun is that is sticks to most of the Pac-Manesque conventions, but then blows the boring stuff away to allow for more fun. You’ll still be navigating mazes, eating pellets and chasing down bad guys – but this time you’ll do it on randomly generated mazes while shooting at bad guys and trying to unlock a door to escape.

The most ingenious and infinitely replayable tweak to the Pac-Man formula is easily the randomly created maps you play on. Most Pac-Man clones get old fast. You know your way around the maps and just kind of zone out and get through it until you get to a challenging part. Not here. From the word go you’ll be playing on maps you’ve never seen – some with dead ends, some with lots of paths at the edges that wrap around. It’s always different, so you’re always on your toes.

One of the aspects I really loved is the fact that you’re always firing your gun forward, but the bullets wrap around the maze edges like everything else. So if you’re not careful you could end up firing shots that wrap around and hit you in the rear! If you’re carrying the key, however, the shots are deflected. It’s a really nice touch and something you need to be constantly aware of when wrapping around the edges of the screen.

There is another option, however, to taking out the enemies. If you set up a turn early, you set out a spark line behind you as you rub against the wall. The longer you do that the higher the music goes and you just know you’re charging up for something cool. Once you’re charged you can just blast through bad guys like they were nothing. 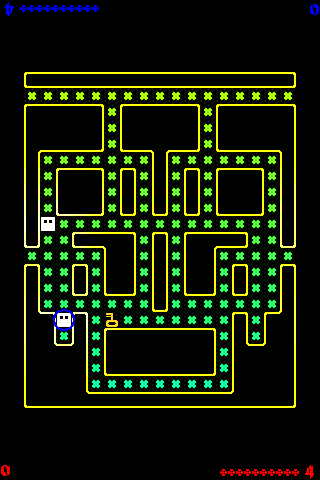 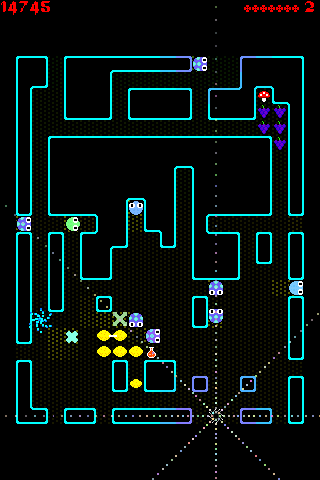 The game controls just by swiping on the touch screen in the direction you want to go, and you can do it anywhere on the screen which I really love. Sometimes I like playing while lying down or in some other sort of non traditional pose, and it’s often a chore to hold the device how the programmers intended me to. With this I can just hold it anywhere and swipe wherever I please. I wish more companies would do this.

I have to admit I was kind of taken aback with how much I enjoyed Forget-Me-Not. When I heard Pac-Man clone, I just sort of groaned and prepared to go through the motions, but this is really a fantastic game from start to finish. It’s dripping with retro goodness but doesn’t bank on nostalgia to provide a compelling experience. An all around excellent game.