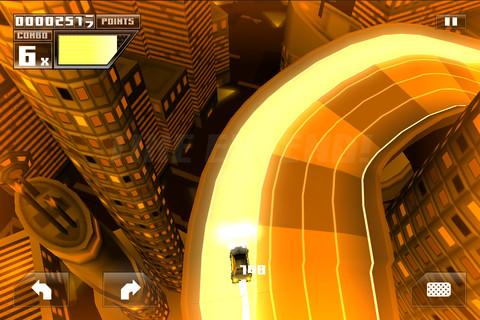 Forever Drive isn’t just a catchy name, it’s a perfect description of the product contained within. The first racing title from iOS developer Supermono, Forever Drive has players driving. And so long as they manage to reach that next checkpoint before their time runs out, they’ll be able to drive forever. Not some silly video game “forever,” but like, forever forever.

This “forever” appeal is at the core of Forever Drive‘s design. Players will race from one end of a track to the other, and so long as they cross the finish line, a brand new track will form right in front of them creating a seamless driving experience. The only thing that will bring your game to an end is failing to cross a checkpoint in time.

Oh – and those new tracks? You’re going to make them. You, and everyone else who plays Forever Drive. But more on that later.

The actual driving mechanics here are decidedly retro, bringing to mind old school classics like RC Pro-Am and Super Sprint. Players are presented with a top down view as their car automatically accelerates along the track. You’ll need to control the steering and braking to keep from crashing into a wall or other vehicle, causing your vehicle to drop in speed and costing you a valuable combo multiplier in the process. There are other control schemes available including tilt and d-pad, but what’s described here is the default, and as usual, the default control setup seems to be the best in our opinion.

Losing speed isn’t something you’re going to want to do, as the only real objective in Forever Drive is to reach the next checkpoint to add time to your clock so that you can, well… forever drive. Losing your combo isn’t good either, as the points you earn are experience points, and levelling up will unlock all sorts of goodies like new cars, paint jobs, license plates – and most importantly, stuff for building your own tracks.

As mentioned previously, the tracks themselves are created not by the game’s designers, but by other players just like you. You’ll have access to building tracks right out of the gate, but as you level up higher in the game, more and more items will be made available to you. What’s neat isn’t how much stuff you’re able to play with when developing set pieces though, but how simple designing an actual track is. Players need merely draw a line with their finger in the track editor, and Forever Drive will layout the track exactly as you’ve doodled it. There’s no need to worry about the nitty gritty parts like changes in elevation, traffic placement, or power-ups – Forever Drive takes care of all of that for you. Simply draw your line, place set pieces like buildings and airships, and save. It couldn’t be easier.

To go with the game’s old school style, the visual presentation here seems to embrace that retro-futurism of the early 80’s when everything was going to look stark and neon. If the minds behind TRON created the New Jersey Turnpike, it would probably look something like Forever Drive.

But while the game’s greatest strength is in its user-created levels, it also ends up being the game’s greatest weakness. It’s not uncommon to all of a sudden find yourself on a track where the road can’t be seen because some idiot has placed a series of buildings right on top of it, or to be on a track that’s so endlessly winding that it would put an end to even the best gamer’s runs. To Supermono’s credit, there’s a sense of quality control as players can give a quick thumbs up/down at the end of each track. Even so, bad track designs like these are destined to pop up from time to time. 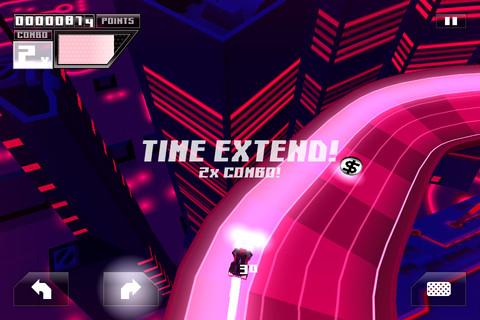 Forever Drive also employs a freemium model that’s wonderfully well-balanced, though the I’m sure the freemium detractors that likely make up the game’s core audience won’t see it that way. Regardless, they should be commended. Yes there’s stuff you can unlock through in-app purchase, but the main push in Forever Drive is the adoption of “credits” that you can spend to earn 10x XP on each game. If you go that route, each play costs one credit. If not, you can simply earn regular XP and play for free.

The notion of what constitutes freemium is changing day after day, largely thanks to releases like this one. A year ago freemium was synonymous with Facebook-style social offerings. Now, though? We just had the pleasure of playing a great little racer that we’d have happily paid to download, complete with user-generated content and a thumpin’ soundtrack. Sure, some of that user-generated content creates something of a stumbling block, but all in all, Forever Drive is great fun for pocket gamers.