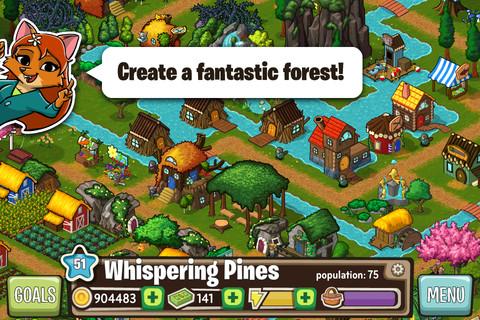 ForestVIlle takes CityVille into the woods

If you took CityVille Hometown and placed it smack dab in the middle of a forest populated with anthropomorphic beavers and bunnies, well, you’d have ForestVille. The two games play virtually identically to one another, which is to say that they play like slimmed down versions of CityVille. And while it’s nice to see Zynga branch out with a fun new setting, it’s disappointing that the very first original “Ville” game on mobile is simply a re-skinned version of an existing game.

So instead of a charming small town, ForestVille takes place in a charming forest town. But the goal, as you’d expect, is largely the same. You simply want to build a large, thriving community for your animals to live in. To do this you’ll build houses, farms, and businesses. Businesses earn you money but need to be supplied with goods (from farming), and in order to increase your population you’ll regularly need to construct community buildings. You can also gift items with and visit your friends, and there’s a standard energy system in place to keep your play sessions relatively short.

This set-up will feel intimately familiar to anyone who played Hometown or its Christmas-themed follow-up Holidaytown, and truthfully the games play identically. The major differences here are aesthetic ones. For instance, at the outset of the game you’ll only be able to build homes for one type of animal, bears, but as you progress additional types of critters will be able to join your forest community. Soon you’ll have a bustling township full of beavers, birds, and bunny rabbits.

This doesn’t affect how the game actually plays, but it’s a nice incentive to continue to grow your town. And while the new forest theme doesn’t drastically change the structure of the game, it does make it much more attractive. The visuals in ForestVille are simply charming, with a creative range of buildings to place in your town and some great looking character portraits. And make sure you zoom in, because the animated residents of your town look great close-up. There are also some neat little visual features, like the way the beavers’ homes are located on the water. 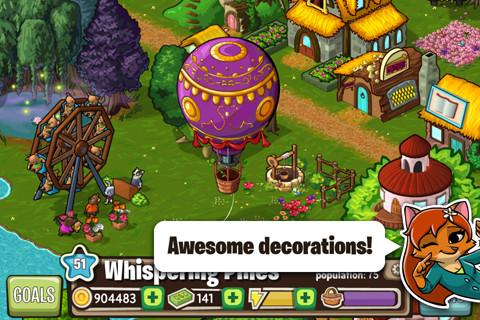 But while ForestVille looks different than CityVille, it doesn’t play differently at all. It’s more of the same, once again, only with a new coat of animal-themed paint over top of it. On Facebook the “Ville” line of games are Zynga’s flagship titles, with each new release offering substantially improved gameplay. But that’s not the case on mobile where so far we’ve seen a few skimmed down ports of Facebook games and now ForestVille, a re-skinned version of game that’s already been released on the App Store twice before.

ForestVille looks great and plays well enough, but it’s not the “Ville” game many of us were hoping for.