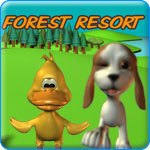 Consider it Diner Dash with animals. Forest Resort is a micromanagement game — where you need to seat, serve and satisfy hungry customers who come to your restaurant – except it’s a forest instead of a diner, and it’s animals instead of people.

The concept sounds cute – and was pulled off fairly well in Alawar’s game Birdies – but Forest Resort is a disappointment due to confusing controls, not to mention unimaginative and easy game-play.

While the story isn’t exactly clear, your job is to help Heather the Hippo run a resort for animals, which involves collecting enough magic to restore the forest to its former beauty. Um, something like that.

When dogs, ducks, penguins and kittens arrive in your forest, you must seat them on a tree stump and take their orders. After some time they’ll have a speech bubble over their head indicating what they want to eat. For example, it might be a picture of a carrot, watermelon, lemon, pear or cherry (usually three or four fruits in total per table).

Click the appropriate signs of fruit near the “kitchen” and the food will magically appear on a serving plate; bring the animals the food and they’ll eat and leave, making room for more animals. If you take too long their heads turn red with anger and eventually leave, which makes it harder for you to achieve your daily goal. Similar to Diner Dash, you might have four customers appear, but you only have a tree stump for two available.

After you finish a level you can choose from one of three upgrades to help with the subsequent level. For example, Speed helps you serve customers faster; Cook Master makes your food appear sooner; Decoration spices up the joint; Chores lets you use singing frogs entertain customers; and Great Talker and Podium lets the resort host, which is a penguin, make guests happy. Players will also see additional tree stumps appear at the beginning of a new level, allowing for more guests to be seated. An issue is that you can only perform two jobs at once so you can’t, say, chain four tasks in a row –you need to take care of two tables and then after serving them, move onto another two.

One of the most annoying problems with Forest Resort is not knowing where to click to help patrons. For example, instead of clicking on the dishes to bring them to the customers you need to click what appears to be a cash register, which is near the food. The dishes then magically appear on your trays. Um, shouldn’t gamers click on the food to pick it up instead of the register?

The game is also way too easy. In level 6, for example, your goal is to reach 180 points, which I achieved after serving just two tables (about a minute or so into the level). OK, so you can then try to reach expert goal at 220 points, but it doesn’t make sense form a pacing perspective to complete your goal so quickly, and then play for another five or six minutes.

Needless-to-say I’m not a fan of the game. I didn’t even mention the annoying music and the fact there’s only one game mode. Too bad the game is basically a copycat of Diner Dash – and a poorly executed one at that – which will likely leave gamers frustrated about wasting their time and money.