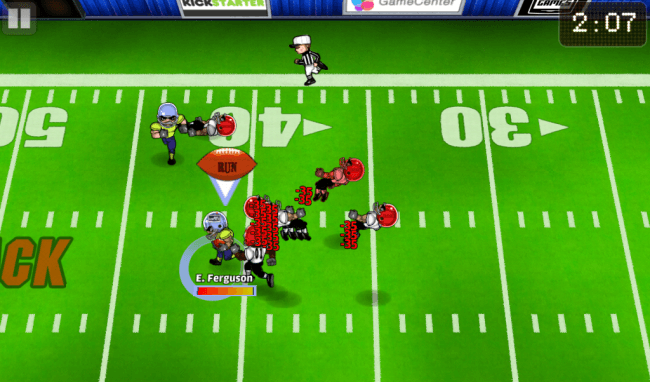 Trade in those punts for some punches

Evidence is rapidly mounting that the physical abuse real football players take on the gridiron is bad for their long term health. Happily, football players in video games suffer no ill effects, so we can pile on the excessive violence guilt-free – especially when it comes via Football Heroes and its nostalgic, over-the-top arcade action. It’s a big play concept that sadly comes up short of a touchdown due to frustrating controls and annoying glitches.

Run Games pitched the Kickstarter community on the idea of a football game with beat ’em up and RPG elements inspired by classics like NFL Blitz and NBA Jam. Not surprisingly, backers rallied around that concept, and the result is a game that challenges you with building the best possible team for winning at a, shall we say, very physical style of football. 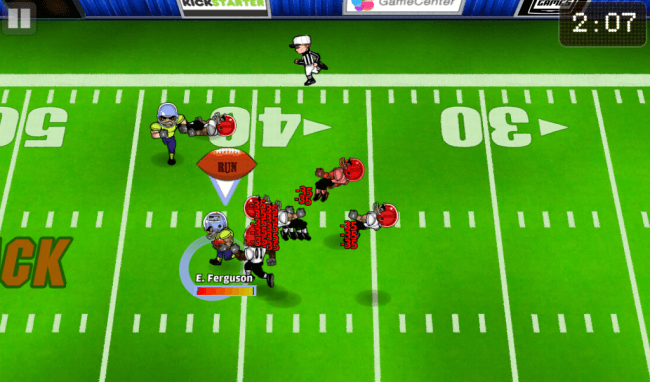 Since one of the main offensive and defensive techniques is punching opposing players, that’s possibly an understatement. You start Football Heroes with a full squad of 18 (the games are 8-on-8, plus you get a kicker/punter and a kick return specialist) athletes ready to take part in a series of tournaments and leagues. They’re just not very good at first, so you’ve got to train them up by playing, and hopefully winning, some games.

The controls are simple enough for anyone to understand. A virtual thumb stick makes players run, and can appear nearly anywhere you touch on the screen. Tapping the screen throws punches, while tapping on players either switches who you control (on defense) or throws a pass to that player (on offense). Swiping in any direction launches your guy into a head-first diving tackle.

This is anything-goes football, so it’s perfectly legal to stop the ball carrier by punching them until they run out of energy or beat up receivers while the ball is in the air. All but the very worst players also have special moves like uppercuts, speed bursts, and teleportation, just to name a few. These are activated by buttons at the bottom of the screen and have MMO-style cooldown timers that make you wait a specified number of downs before you use them again. 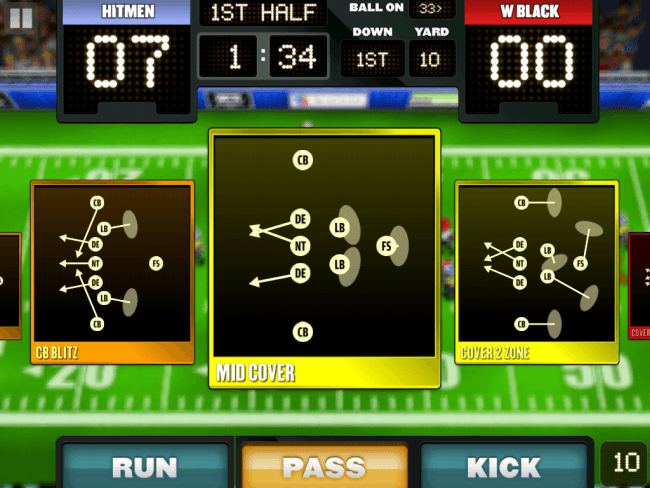 It’s a great system in theory that doesn’t work so well in practice. The virtual stick makes changing directions difficult, and the passing game occasionally registers phantom taps that have your passes sailing places you wish they wouldn’t. Punches and abilities sometimes hurl you in a direction other than toward the right end zone, threatening to turn your player into Jim Marshall without warning (younger readers may need to Google that one).

Despite being fun and well-animated, some abilities also glitch in potentially game-wrecking ways. The teleportation power did this to me more than once, freezing my kick returner in an invulnerable state that had him creeping very slowly toward an eventual score. Effective, yes, but likely not what the devs had in mind.

When everything’s working right, the action is fast-paced and full of ridiculous-in-a-good-way highlights. There’s also a strategic element to play-calling that is a direct homage to Tecmo Bowl. Each offensive play has a defensive play that specifically counters it. Call the right D and you’ll be able to blow up the play in the backfield unless the other side is very quick and/or lucky. 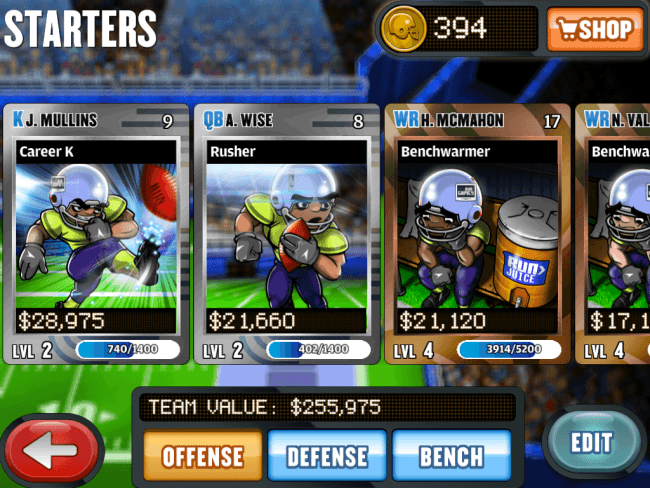 Big plays and successful attack combos give your players experience points, allowing them to level up over time. Different tiers of athletes have different max levels, but in general, it’s advisable to level everyone up to enhance their base stats. Coins from victories and leveled players can be spent in the in-game store, where you’ll find a selection of individual players that changes on a regular basis, plus packs that come with several players, special consumable plays, and one-use items. Packs and players can be added with real money through IAPs, too.

The art style took a step forward from what was shown during the Kickstarter campaign, and the players actually look angry enough to punch out their opposing numbers. Yet the overall feel is one that doesn’t take itself too seriously, which is just right for this kind of game.

That’s not enough to overcome the technical missteps, though there’s nothing so broken that Run Games shouldn’t be able to fix it in future patches. Football Heroes is like a team running the right schemes but not quite executing what the coach has in mind. Let’s hope it huddles up and comes back out fighting – quite literally, in this case.