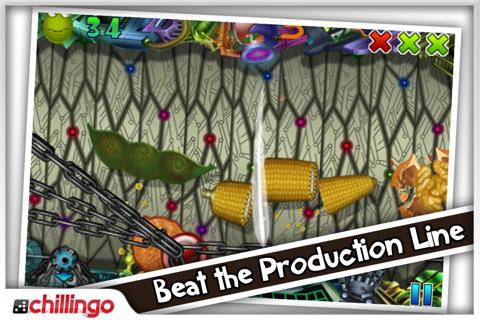 Fruit Ninja may have set the standard for the produce slicing genre (I suppose that’s a real thing now, isn’t it?), but Food Processing takes the fauna slaughter to a whole new level. It’s messy, it’s tough, and it’s a whole lot of fun.

Your job as food processor is to slice, dice and dismember fruits and veggies as they pass by on the conveyor belt. As you get better, more produce is unlocked and the conveyor belt speeds up. Watch out for rotten produce, as it will count against you as a strike. Miss three veggies or process three rotten fruits and it’s game over for you.

Like a lot of the best stuff on the iPhone, Food Processing‘s premise is disarmingly simple. What’s great here is both the variety of food to slice and dice, but also how you do it.

Fruit Ninja, wonderful as it is, really only deals with flying fruit and slicing it as fast as you can. Food Processing adds some genuine skill to the process. You’ll start by popping soy beans from a pod by tapping them. Once you’re good at that, eggplant starts showing up. The goal is to only slice off the top of the eggplant. If you slice a little lower than that, it only counts as a “good” slice as opposed to a “perfect” one. Slice at the bottom, and it’s a “bad” slice. Bad slices don’t count as strikes, but they don’t add to your score either.

More fruits and veggies follow, from cracking walnuts to slicing corn to piercing and halving pomegranates. Each fruit and veg is really easy to distinguish – both from each other as well as the rotten and fresh varieties – and their preparation is unique.

The more perfect preps you do in a row, the better the combo is. Food Processing has only one goal, and that’s to set the highest score you can muster. But not only is your score used in the Crystal and Game Center leaderboards and achievements (always a plus for replayability), but to unlock things as well.

Once you score over 600 points, Hell’s Kitchen mode unlocks. This mode is not only super fast and tough, but it adds some gameplay new modifiers as well. For instance, if you accidentally tap on a “forbidden fruit” icon, you cannot process any of that fruit again or it counts as a strike. While it may take some pressure off, it does serious damage to your score. Other modifers change the speed of the conveyor belt (itself going a lot faster than regular mode), and the visibility of the playfield. It’s a great arcade challenge.

Food Processing doesn’t have much in the way of graphics, but at least they’re bright and easy on the eyes. Explosions when you perform perfect slices, fruit bits flying everywhere, and the details on the different conveyor belts you can unlock do add some personality to Food Processing. The music is a great hard-driving rock loop, and the accompanying sound effects are equally bombastic. Again, why developers won’t let you use your own music when there’s only one real track to listen to is still beyond me, and a definite annoyance in most arcade-style iPhone titles. 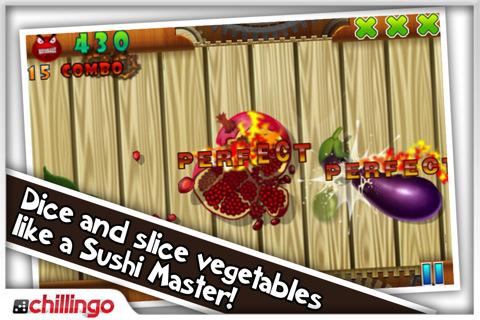 Finally, a developer has solved the issue of interrupted gameplay in an arcade title. If you have to pause, or even switch tasks (like a call coming in during a game), Food Processing is halted. But when you return, Food Processing very kindly gives you a short “Ready-GO” sequence to ensure you’re not completely messed up when things start back up. It’s not a huge thing, of course, but it is very nice.

The only real gameplay quirk of Food Processing is in its feedback on your actions. When slicing, you can see a visual semi-transparent swoosh indicating where you swiped. Tapping, on the other hand, doesn’t really let you know if you’ve done it correctly. The best example of this is the pomegranate. To get a perfect cut, you have to tap as if piercing the hard outer shell, then slice to release the seeds. At higher speeds, though I was sure I did it right, the game only registered my slice, giving me only a good score and reducing my combo. Some sort of feedback, be it another animation or even a vibration, would go a long way here.

Other than that, the only other thing with Food Processing is there should be more of it. It’s not the most original title in the App Store, but it sure is well-made, and most importantly, fun. It’s great for short spurts thanks to a great pause-resume, and enough varied arcade challenge to keep you going for a while. Definitely worth the candy-bar price tag for this vegfest.

Wave – Against every BEAT! Review