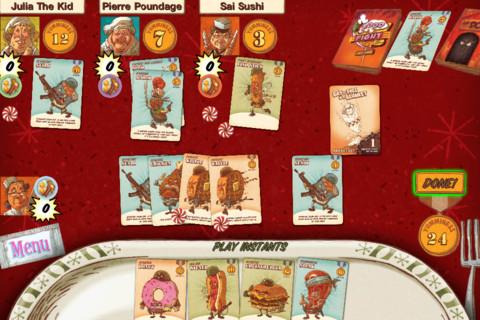 The honest truth is that I would’ve checked out whatever Playdek came out with after their phenomenal iOS recreation of the card game Ascension: Chronicle of the Godslayer. I was a big fan of the original card game so had high expectations of the digital port, and they blew them all away. Making a game that good buys you an awful lot of trust and willingness on my part. Impress the heck out of me, and you can bet I’ll be there to check out your follow-ups. No questions asked.

Lucky for me, it looks like Playdek aren’t simply one trick ponies, with their new port of another real life card game hitting the App Store recently. This time around the game is from Crypotozoic Entertainment. Like their previous offering, Food Fight is also a card game that defies what you might think of when you hear the words “card game.”

The goal of the game is to beat your opponents on different battlefields represented by the 3 different meals of the day (breakfast, lunch and dinner). The cards you play likewise fall into those same 3 categories. Each round you’ll pick one of the battle fields and then fight your opponents with your hand of cards.

The fighting is really just “War” which some extra abilities. Cards all have values, and whoever has the highest wins the round. Unlike straight War though, there are some things you can do to increase your chances of winning. Sometimes cards get bonuses when they’re played (for instance, a dinner food might get a plus to their value when played on the dinner battlefield). My personal favorite are the pancakes, which are pretty weak with a value of 1, but that goes up significantly if you play more than one at a time (psst, it’s called “stacking”… get it?)

One of the aspects I really enjoy is the card drafting. You and your opponents start with a large hand of cards. Each of you chooses one and then passes the remaining cards to the person next to you. You once again pick a card and hand them off. Round and round you go picking cards and passing them till there are none left, leaving you with your hand. This lets you build a hand to your likes/dislikes and lets you set up cards that work well together or combo nicely. 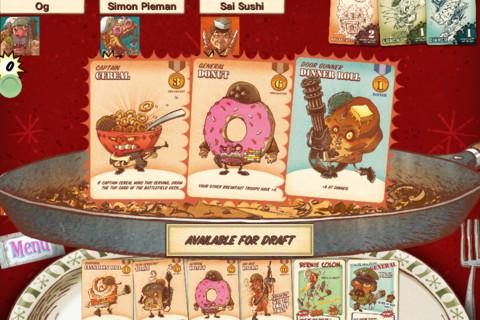 The presentation of the game is totally top notch. The playfield looks like a dinner table, the menus looks like they came out of a 50’s dinner, and the music fits that theme perfectly. Even the names of the AI opponents are a fit, like Sai Sushi or Pepe Pepper. It’s what I’d call the complete package.

Then there’s the cards themselves. Chock full of color, each one with a fun illustration depicting different foods in various military get-ups. They’re quite funny and with names like Corporal Cinnamon Roll, General Cheeseburger, First Sergent Fish Stick and Kaboom Kabob; they really have some fun with them. I did some quick searching and found the art of the cards is the same as the real card game, so kudos to them for just keeping what already works.

The framework and UI of Food Fight seems lifted right out of Ascension: Chronicle of the Godslayer, which I am 100% ok with. The rulebook, card gallery, and game creation options are the same, as well as the setup for the asynchronous online play, which, like before ,works perfectly here. A classic example of “if it ain’t broke, don’t fix it.”

But at the end of the day, Food Fight isn’t a very deep game. It’s really just War with a little something extra sprinkled on top. Not nearly as deep as Ascension is, but it’s sort of unfair to compare them directly. Playdek has done a fantastic job bringing the game to the mobile devices. And while it won’t be my go-to game anytime soon, this is definitely the sort of title I’ll revisit every once in a while to grab a game or two.