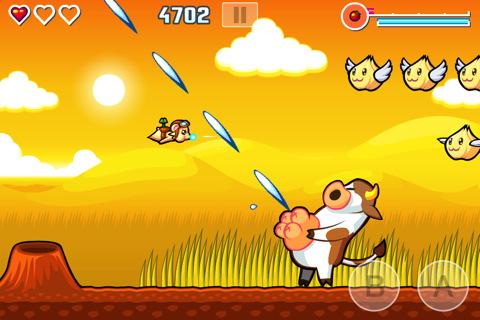 Parodying a game genre is nothing new. However, there are an awful lot of bad parodies out there – particularly those that try too hard. One of the best examples of a good parody was Parodius, a parody of a seminal space shooter called Gradius (parody + Gradius = Parodius). And while Flying Hamster isn’t built directly on the backs of other games, it does beautifully parody Japanese shoot-em-ups. It also happens to be a blast to play.

Shoot-em-ups (or “shmups” as we old fogeys like to call them) are as old as gaming itself. Around the early-to-mid 1990s, shmups were everywhere, but were especially popular in Japan. The few that made it over to North America were often met with bemusement. Flying Hamster will do little to help that, but it’s beautiful in its own right, and even more so when you’re in on the joke.

The plot is functional (girl hamster kidnapped, boy hamster flies off to rescue her) and gets things moving. As the name states, you’re controlling said hamster through six levels of… well, six levels. It’s all kind of weird.

Enemies range from giant bears flinging salmon from a river, to owls shooting their feathers, to flying chickens that lay floating explosive eggs, to kamikaze goats who ram you from the side of the screen, to screaming cows that fire milk form their udders to… If you’re going to play Flying Hamster, you definitely need a sense of humor.

The graphics and sound are straight out of a Super Nintendo game from about 1995. Everything is beautiful, bright, colorful and looking very much like the anime stylings of the silly shmups of the era. The techno-guitar-pop background music is also apropos of the time. The developers definitely know their source material, and Flying Hamster shines as a result.

The controls are fantastic. Flying Hamster offers four different options, some more successful than others. The best one is a relative control, meaning you just move your thumb around and Hammie (he doesn’t have an official name, but that’s what I call him) follows your thumb movements. You can also have an exact position control, meaning wherever you touch, that’s exactly where Hammie goes. There’s an onscreen control stick option that works pretty well too. The only scheme that was truly awkward was the tilt controls, which end up making you look silly while playing the game anyway.

Any good shmup will have a variety of weapons, and Flying Hamster definitely fits the bill. The way they work is really organic, and works well in the context of the game. Hammie has a standard spit that he does, as well as a powered-up shot. If you pass by certain items while flying, though, you can gain a temporary super gun. Picking up a red seed gives you a spread shot, while picking up what looks like a beer mug give you a stream shot. Beehives grant you the ability to shoot homing bees for a short time. Not only are the weapons fun and funny, but they’re great for causing massive damage. 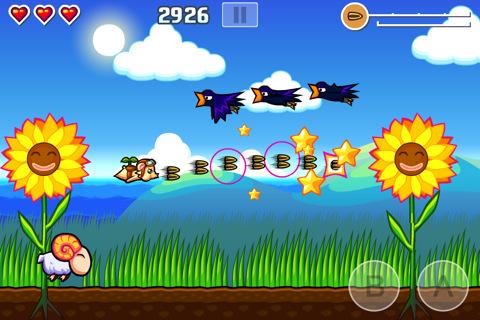 The game is rife with achievements thanks to OpenFeint and Game Center. With a shmup, bragging rights are one of the more important aspects, and Flying Hamster has you covered there too. If you’re good enough you can unlock a Hard Mode for even more shmup masochism.

The only real issue to warn some gamers about is that Flying Hamster takes its heritage seriously, both for good and bad. Sure it’s got all the right mechanics, but it also has the high difficulty. You can withstand three hits before you have to use up a credit. You get five credits per game. The first few times you’ll probably use those up quickly. Shmups are all about pattern memorization: remembering where enemies are, where the safe zones are and such. You’ll get the hang of it, but it’ll take time.

In this same vein, if you’re used to starting on whatever level you like, think again. After you’ve used all your credits and it’s game over you’ll have to start from the beginning. Every time. This is just how it was back then, and you’d better accept it.

If you can accept the heritage of the grand old shmup, Flying Hamster is a great addition to your iPhone gaming library. It may be a tough nut to crack, but it’s filled with fun, laughs and solid gameplay. If you played any of these kinds of games in the past, don’t hesitate to download this one. If you haven’t, Flying Hamster will give you a glimpse into the more bizarre side of games. It’s definitely worth the look.