Home / Reviews / Fly With Me Review

Fly With Me Review 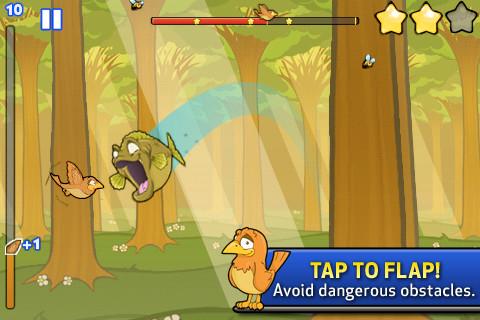 Though the presentation suggests a casual experience, Fly With Me can get pretty tough

Fly With Me is a simple tale about the birds and the bees. Bird gets assaulted by bees while lazing in the sun; bird sets out for revenge; gameplay ensues. Through a scant smattering of art stills, Fly With Me sets up its premise and promptly kicks you out of the nest.

As with most original Electronic Arts offerings on iOS, Fly With Me is neatly divvied up into three distinct areas, each with 15 levels to play through. This is a one-finger game that has you tapping the screen to flap your wings. An energy bar sits vertically alongside the left-hand side of the screen, and each flap drains a bit of your energy. Energy is replenished with each bee you snap up, but you’ll need to balance the need to eat bees with avoiding various obstacles and baddies.

Conserving energy presents perhaps the most fun challenge in the game, as Fly With Me simply will not tolerate flailing. There are three stars and a single gear hidden in each level, and you’ll be required to collect a certain number of stars in order to unlock other areas and challenge levels.

There’s a hefty variety of enemies and obstacles, and new gameplay mechanics are introduced at a steady pace. In addition to the main game, there are three challenge areas set up as endless runs using the backgrounds and assets from the story mode. Fly With Me is a ton of fun, and most levels are expertly balanced. That being said, there are a few issues that leave a sizeable dent in the overall enjoyment of this game.

Fly With Me is constantly shoving in-app purchases in your face. Almost every time you die, the game will present you with an option to buy your way out. This is perhaps the worst kind of IAP imaginable. And some of the game’s latter levels are all but impossible to complete without a helping hand. That’s simply not good game design. 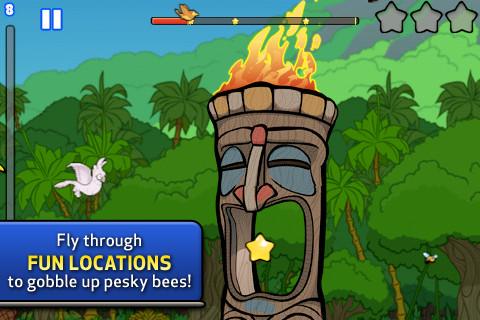 Additionally, the frame rate will occasionally hiccup, causing second-long stutters that can get you killed. The location of the pause button was also a bit of issue, as my thumb would inadvertently tap on it as the gameplay ramped up in difficulty.

Fly With Me is undeniably fun. The visuals are pretty and polished, and the package is robust for the asking price. Unfortunately EA has opted to bend the rules a bit and make it near impossible for players to complete the game without spending a little extra. Game Center support has also been bucked in favor of EA’s Origin network. I wanted to love Fly With Me, but it simply isn’t ready for a long-term relationship.