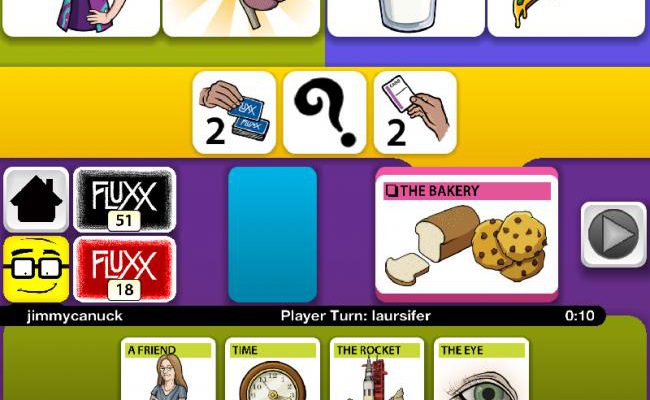 Tabletop card games – especially the kind that hobby gamers play – can be a lot of things.  Deep, strategic, complex; all of these are words you might expect to hear. But Fluxx is none of these.  While it may appeal to the same hobbyist market as games like Catan and Carcassonne, Fluxx is just about as silly and simple as games can get.  But that’s ok – sometimes silly and simple is exactly what the doctor ordered.

The overall objective is to play two “keeper” cards that match the cards outlined on a “goal” card.  If you can do that, you’ll win.  Sounds easy enough, right?  Well here’s the thing: you’ll need to do that while every other rule in the game changes on a nearly turn-by-turn basis. 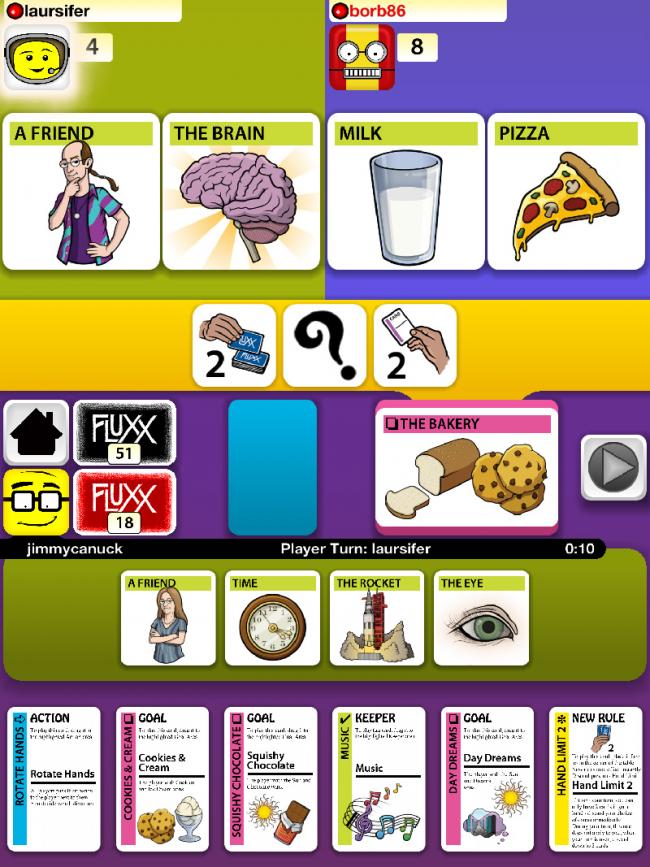 Player are given hands that consist of four kinds of cards; keepers, goals, actions, and rules.  You can play keepers to an area in front of you in the hopes of matching the goal, you can play goal cards to change the current objective for the table, and you can play action cards to do things like trade cards with another player or discard your entire hand and draw a fresh one.  But as you’ve probably guessed, the real mayhem comes from the rules cards.

Rule cards dictate how many cards are drawn, discarded, and played each turn.  That may sound dry on paper, but when you have players picking up five cards, playing one, and no limit to how many they can hold in their hand, you’ll be drowning in cards in no time.

It’s a game of great silliness and fun that I’ve had the pleasure of enjoying in physical form on more than a few occasions, so I feel confident in saying that Playdek’s adaption has the same great feel as its paper-based predecessor.  And while the rule changes might sound like they’d get hard to follow, don’t worry – before the end of your first game, you’ll pretty much feel like a world champion.

You can play with up to four players, online or offline, and the offline mode supports both real players and AI – so you’ve got no shortage of ways to play.  The online features the unique timed match structure that Playdek introduced in Summoner Wars – and while it’s a great way to solve the “abandoned game” problem that most turn-based multiplayer games suffer from on iOS, this is the sort of game that feels like it should demand synchronous play.  In the few online matches we played, most players seemed to agree and attentively take their turns as if we were all sitting around a virtual table.  It’s just, well… the notion of someone thinking they could take 7 days between turns in a game like this is just downright bizarre. 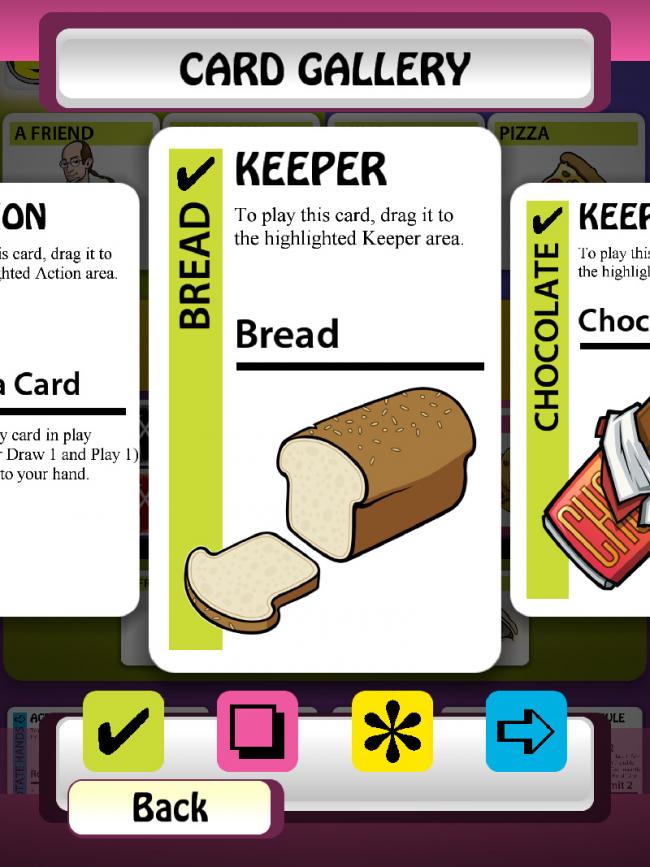 The only real disappointment with the game is how little of it there is.  Looney Labs has been releasing new deck after new deck of Fluxx since its original 1997 release, but this digital adaption features only the core set.  With games like Cthulhu Fluxx, Martian Fluxx, and even Monty Python Fluxx out there in the real world, we were hoping to see additional decks available via in-app purchase.  For whatever reason, this isn’t the route they chose to go.

There’s also no avoiding the fact that, while it may be a great adaptation that will give you plenty of reasons to snicker at the wacky rule changes, it just doesn’t compete with the uproarious laughter that can happen when you’re playing a physical deck of Fluxx around the kitchen table with friends.  Watching friends pick up enormous stacks of cards only to play one and discard the rest because of your last rule change?  There’s a satisfaction there that just can’t be reproduced digitally.  That’s not to say it doesn’t come close, but it’s sometimes hard to compete with the real thing.

Our stodgy beliefs in the power of real human interaction aside, Playdek’s digital take on Fluxx is just about everything fans of the card game could ask for.  Here’s to hoping that they add some in-app purchases down the road, because my life just won’t be complete without Zombie Fluxx on my iPad.