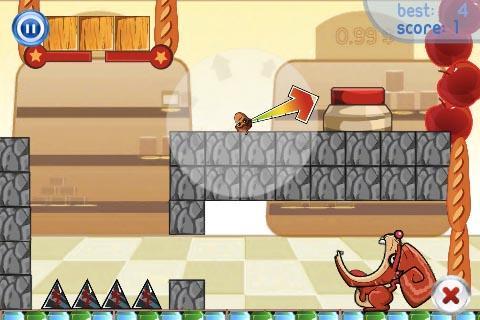 Physics games get a few new twists in Floop

Physics games that are all about flinging something at something else are all too often compared to Angry Birds, and it’s a fate that I suspect Floop may fall prey to. But after spending some time with Blacksmith Games’ latest, I can assure you that the two games couldn’t have less in common. Well – except for that whole flinging things at other things …thing.

Floop is a physics puzzle game that has more in common with basketball physics than it does birds with a nasty disposition. In fact, Floop feels a little like what would happen if you took StarDunk and turned it into a puzzle platformer. There’s a very large, very hungry squirrel, and it’s up to you to get a nut in his mouth. You’ll do this by pulling back on the acorn, aiming, and releasing – a mechanic that’s eerily similar to the aforementioned StarDunk. With his head tilted back, the squirrel’s mouth feels like a ravenous basketball rim. And just like in the NBA, sinking that basket feels all too satisfying.

Admittedly, from the description above one might call shenanigans on my claim that Floop is more than just a cookie cutter copycat of Angry Birds. Thankfully, my description is just getting started. What makes Floop unique is that, in lieu of a stationary puzzle with a limited number of slingable objects, players will guide a single nut through a variety of platforming puzzles. Early in the game these puzzles are simple, and the platforming elements minimal. But once you get through the first dozen or so stages, you’ll start to explore levels that offer a number of nooks and crannies that you’ll need to navigate to get to the squirrels mouth.

As they journey these platforms, players will encounter a variety of obstacles and tools. Cannons and catapults will give your nut a huge boost in the right direction if you get the aim just right. Fans will blow you in certain directions, while ice will cause you to slide along the ground. There are even blocks you’ll need to push around by hurling your nut into them. Really great uses of these different elements combined with some genius platform and goal placement ensure that Floop remains fun and unique throughout.

Despite this fun and uniqueness, though, Floop is lacking a certain element of challenge. It’s not that the game doesn’t get difficult in the later levels. It’s just that, since you’re guiding one nut to its goal rather than working with a limited supply, there’s really no fear of failure. You can keep trying without ever having to restart the level. There’s still the overall challenge that the level design presents – but at the same time, the game never punishes you if you can’t get it right the first time. Depending on your point of view, this can either be a good or a bad design choice. 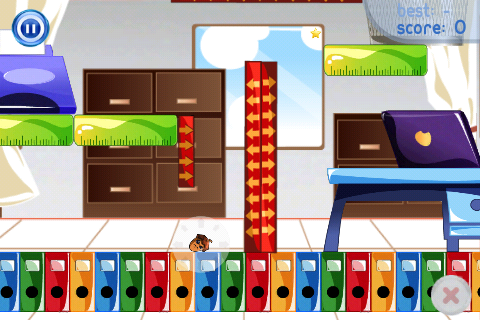 We were also a little surprised by the slowness of the acorn once it had been aimed and released. While it didn’t feel like it was moving through molasses, it still feel slower than it should. This shook us out of the experience a little. When you’re making a physics game, you need to get all the physics right, and the speed that your shots moved at just didn’t feel natural enough.

Finally, there’s no denying that getting the acorn into the target – the squirrels mouth – was a little bit harder than you’d expect. Think about that basketball comparison. Now imagine playing basketball with a giant tooth on the front of the rim and no backboard. Also, the net is in the middle of the room so the ball can easily soar over it. It may sound harsh, but it’s an apt comparison. Expect to make that final shot – the one that should be the easiest of the level – a few times before getting it in every now and again.

Enjoyable level design and a unique puzzle platforming twist make Floop a terrific little physics game that should easily appeal to fans of this well-worn genre. We may have our complaints, but when looked at as a whole they did little to detract from the overall fun. Feeding this hungry squirrel could easily become your next obsession. If you’re finally getting tired of putting birds in a slingshot, maybe it’s time to go ‘nuts’.