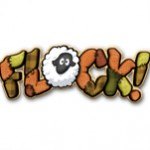 While herding sheep may seem like a chore, throw in some aliens and a bunch of crazy obstacles and you have Capcom’s newest and most entertaining downloadable title, Flock! Available for download for the PC (which is the system we review the game on), Xbox 360 via Xbox Live and Playstation 3 via the Playstation Network, Flock brings you into the world of live stock alien abduction in a fresh and kooky kind of way.

Acting as interstellar cowboys, Flock! has you herding terrified farm animals under fences, around dangerous cliffs and through piles of poo; all in an effort to bring them back to your mother-ship known as the Mother-Flocker. Each animal has special abilities that will help you get them safety back to your ship and past all the obstacles each stage throws at you. For example, the sheep’s woolly fur makes them shrink in water, so you can herd them under fences and cows are powerful, so you can use them to knock fences down or have them jump to launch the catapults.

Each one of the 55 stages has a set number of animals that must make it back to the mother-ship in order to complete the level and the faster you complete the quota, the higher the medal you get for the stage – gold, silver or bronze. You can also try for a perfect abduction in each stage which happens when you collect all animals in the stage, but this only boosts your overall score and doesn’t affect your stage medal. The game comes with online leader boards for those who like to compare their scores with other successful alien shepherds.

You have four options on how to control your mini ship while playing this game: the keyboard, the mouse, a combo of the two or you can use an Xbox 360 controller if you have one that can connect to the computer via USB port. While I tried each control scheme on for size and finally settled on my Xbox controller with its smoother game control, you’ll have to decide which setup is right for you. For those without an Xbox controller, I would suggest using the keyboard controls as they are easiest to work and most fluid on screen next to the mouse or combo controls. I found the mouse-only controls made the game much harder to control and slowed my ship down.

Beyond the single player campaign, you also have the option of playing with a friend via a local co-operative campaign (where both people share the same computer), which has its own unique selection of stages to play. If you finish up all the pre-made stages, Flock! also gives you the option to make your own stage via the level editor but all the level elements must be unlock via the single player campaign before use.

I’ve been waiting to play this game for quite some time and now that I’ve gotten my hands on the finished product, I’m happy to say that I am not disappointed. Flock is a fun and quirky game, constantly coming up with fresh and new ideas as you travel from level to level. The developers never gave a repeat performance throughout each stage, always providing some new obstacle or animal ability for you to work with.

The graphics are positively darling with its handmade patchwork environments and all the fluffy critters running around on screen. Each environment is so interactive too with multiple objects that move or affect your animals in some way. The game’s 1950s b-movie like music was unfortunately not as lovely and quickly got very old and annoying. If it wasn’t for the cute animal sound effects during the levels, I probably would have turned the sound off completely.

Flock! unfortunately came saddled with some design issues, both in the pre-made levels and level editor that kept causing your animals to get stuck in behind objects or fall of cliffs. I understand some of these elements are part of the game in order to make it harder but having your animals stuck behind trees and out of view, makes it impossible to herd them back out and then the level is beyond completing. Those obstacles are not really fair in the long run.

When the animals are all rounded up, Flock! truly is a unique puzzle game that will keep you busy for hours. Each stage provides its own new challenges, packed full of interesting elements, but remember not to let the game’s cutesy and goofy looking exterior fool you because this is a real tough game when you want to complete each stage with a perfect abduction and a gold medal. I highly recommend this game to everyone who’s looking for something new and unique in a puzzle game and best of all, its family friendly, so no blood or gore to worry about.