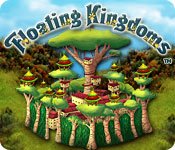 For people turned off by the complexity and micro-management of most strategy games, there’s Floating Kingdoms, a kind of strategy-lite that holds the player’s hand through everything from gathering resources to deciding which structure to build next. In fact, the game does so much for you that it sucks a little too much of the challenge out of what was otherwise an interesting concept.

The premise is pretty neat. The game is set in a fantasy kingdom that is made up of 15 different loosely connected islands that hover high in the sky, and the kingdom’s inhabitants travel in large flying ships from one island to the next.

The main character is Cornelia, an apprentice of the kingdom’s Chief Imperial Architect, Sanchio. With the help of various colleagues, Cornelia’s job is to travel to each of the islands and rejuvenate them by harvesting resources and building a series of structures that culminate in a beautiful palace in the center.

The action takes place on a single screen where you’ll see dozens of tiny inhabitants milling around. Most of the time they’ll do their own thing, but you can click on a blank area to have them construct a new building – provided you have the required amount of wood, stone and gold.

Basic buildings include a sawmill for producing wood, a quarry to produce stone, and a gold mine to extract gold. There’s also a windmill to ground grains into flour, and farms to produce food that can be used to cook pizzas to keep your workers fed and happy. A water mill is required to keep your farms irrigated.

Harvesting these all-important resources is accomplished in an unorthodox way: you actually have to earn them by playing mini-games at each of the buildings. For example, to harvest wood from the sawmill, you play a mah jong game where more wood is added to the pile as you match wood tiles.

At the tavern, you can make pizzas by selecting the correct ingredients in a click management game. There’s also a match-three puzzle game for getting gold, a marble popper to increase water levels at the water mill, and a brick-buster to mine stone in the quarry, and two mini-games that involve matching objects to their correct silhouettes for harvesting flour and food.

While going about your business you might have visits from pirates and traders. Pirates demand a portion of your resources or else they’ll curse a building, which prevents it from producing resources. Traders offer a limited supply of goodies, including orbs to let you harvest resources without having to play the mini-games, and potions that reverse curses. Unfortunately, anything you purchase doesn’t carry over to the next level.

The colorful and detailed graphics are one of Floating Kingdoms‘ biggest strengths. It’s fun to watch the people go about their business, and see ships floating by in the background. Upon completing a level, you get to sit back and watch the palace sprout up accompanied by fireworks. There’s also a screensaver mode where the animations still run but time doesn’t pass.

By way of cutscenes and letters from your friend, the magician’s apprentice Aghanor, you’ll learn about a sub-plot of intrigue and deception at the palace that ties into all the work you’re doing.

My biggest beef with Floating Kingdoms is that there’s just not enough variety. The game tells you exactly which buildings to construct when. You have to construct the buildings in a specific order to eventually reach the palace. Buildings don’t even change their locations from island to island. Occasionally you’ll have to remove obstacles like hills and forests before you can build the palace, but this simply involves clicking on them and letting your workers go to town.

Perhaps it’s better not to think of Floating Kingdoms as a strategy game at all, but rather a collection of mini-games. Of the games on offer, mah jong is most enjoyable. The rest are just very basic iterations of formats that have been done countless times before, with more detail and depth, in other standalone titles. As a package, Floating Kingdoms takes a creative approach to the strategy game format but can start to feel monotonous over long play sessions.