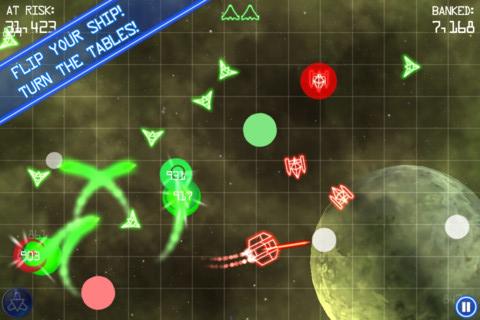 The endless pursuit of the high score. If you were a child of the 80’s, you chased it for years in the arcades. If you’re a child of today, however, it seems that the best place to go for that sublime thrill is in your very own pocket. FlipShip, the debut release from ByteSize Games, is the latest in a seemingly endless series of iOS games that sends players on a race to the top of the leaderboards. Luckily for us, it’s also one of the best.

If I were to sum up FlipShip in a single sentence, I’d call it “Tilt to Live meets Ikaruga.” Thankfully though, this is a review, so I have many sentences in which I can elaborate.

The base gameplay here is almost a cookie cutter of Tilt to Live, which we utterly adored when it was first released in early 2010. Players will control a ship that’s trapped within the confines of their screen, and they will do so solely by tilting the device. Your ship never stops moving, and you’ll need to avoid the other ships that are flying around at all costs.

But rather than just being a shameless copycat, FlipShip takes the premise of Tilt to Live and builds it into something wonderfully new. This is where the Ikaruga influence comes in. For those not familiar with that cult-loved vertical shooter, Ikaruga presented players with a world of black and white enemy ships, and a player’s own ship could only kill enemies of the same color. Fortunately you could change your ship’s color at will, leaving players not only frantically shooting, but trying to decide when they most needed to switch from black to white.

Swap out “black to white” for “red to blue” or “green to yellow,” and you’ve got FlipShip in a nutshell. Players will control their ship’s movement entirely by tilting, trying to get close to like-colored ships to destroy them and avoid different colored ships so that they don’t become victims. The longer you stay one color, the higher your score becomes – but watch out! That score doesn’t get added to your total until you flip to the other color.

You’ll also get a choice of ships at the beginning, each with different speeds and special abilities to unleash, as well as Game Center leaderboards and achievements. And that’s pretty much all there is to the package. Then again, that’s really all their needs to be. FlipShip is exactly the sort of game that mobile devices thrive on – easy to understand, frantic to play, and impossible to put down. In a word, it’s great.

The tight gameplay is well-complemented by the presentation. Glowing neon graphics a la Geometry Wars set the stage, and an original thumping soundtrack provides the perfect accompaniment to this space shoot-em-up. 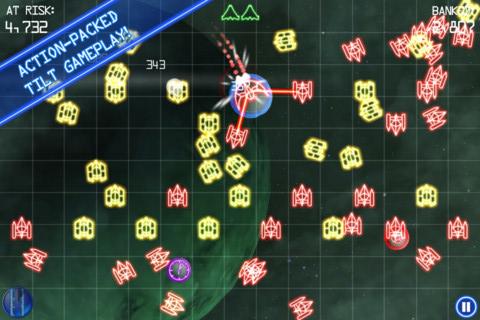 If there’s one complaint to be had, it’s that the Tilt to Live influence feels a little too on the mark. Being inspired by a game is one thing, but even the power-ups in Tilt to Live seem to be paralleled in FlipShip. There’s a fine line between inspiration and plagiarism, and at times, FlipShip straddles that line a little too dangerously for my liking.

Still, such complaints don’t detract from the actual gameplay. FlipShip manages to take elements of a few terrific games and combine them into something fresh and new, proving once again that the whole can sometimes be greater than the sum of its parts. We would’ve liked to see a few more modes thrown into the mix, but overall, FlipShip is a terrific little high score chaser that nigh impossible to put down. Consider this one a must buy.