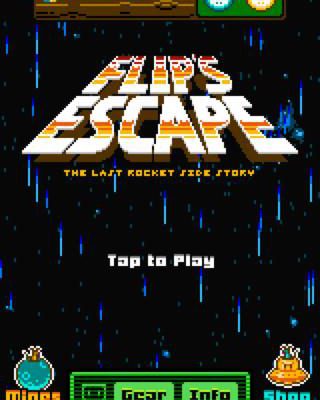 Rocket man, burning out his fuse up here alone

On my first playthrough, I couldn’t see how I’d ever file a positive review for Flip’s Escape. The controls felt obtuse, and the game – which presented itself as an endless runner of sorts – was filled with jarring stopping and starting. Ten minutes in, however, and I was frantically pressing the “tap to play again” button without even thinking. In a gaming landscape of short attention spans, believe me when I say this is one on which you should reserve snap judgement. It will take you from skepticism to obsession at warp speed.

Flip’s Escape is billed as a “spin-off” to developer Shaun Inman’s critical darling The Last Rocket (about which I cannot say enough good things). Without spoiling anything from the original, it starts off in medias res as our smiley rocket protagonist Flip and his sentient computer companion AMI find themselves flying through the far reaches of space, chased by a shockwave blast from the sun.

And with that, you’re off! Like a dessert to The Last Rocket’s excellent meal, this one abandons all sense of a continuing narrative for pure, unfiltered play. And far less patient play at that (after all, you’re being chased by the sun itself). Inman uses the unending palette of space to explore the endless runner genre, with a few notable tweaks. The first of which is the assumption that your movement is predictable. Here, Flip is not only blasting forwards at increasing speeds, but moving diagonally from the left side of the screen to the right, leaving you with only one power: the ability to tap the screen to momentarily pump the interstellar breaks.

It’s here – with these controls – that the origins of my first ten minutes lie. With Flip’s Escape, it’s important that you adjust your expectations going in. A typical high-score chase this is most definitely not, and for many, the learning curve here will be like a mini boot camp: brief, but steep. For the most part, this is a good thing, as Inman has wrapped a tried and true (read: somewhat stale) archetype inside a control scheme that gives it new life. Keeping an eye on obstacles and avoiding them is no longer the name of the game alone.

Instead, you’re burdened just as much by the need to pinpoint when it is you should stop moving and allow obstacles to pass you by, as Flip earns a crucial “warp boost” by snagging close-circling stars attached to incoming rocks… which you can turn around and trade for a free hit if you’re willing to see the meter depleted. All of this while factoring in the ever creeping threat behind you. Where other entries in this space are about learning how to do one thing really well, this entry from outer space captures the feeling of mastering a skill set. It asks you to bring things down to the wire, make close escapes, and risk narrow misses, therefore feeling all the more satisfying both in success and failure. 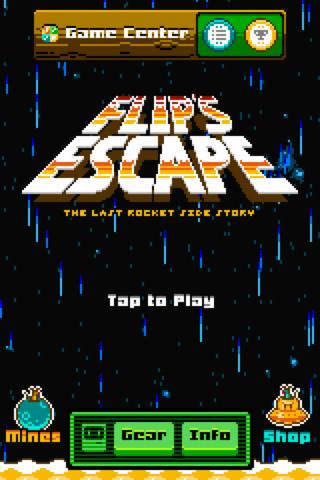 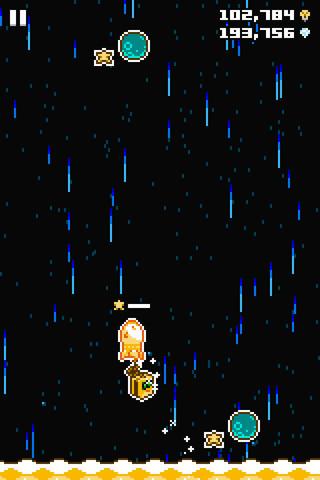 So why the ten hellish minutes? Because while everything feels like it’s by design, there are elements of a design like this that will always prove insurmountable. And before you’ve developed the acumen to prolong the inevitable, Flip’s Escape‘s trial by fire is arguably one of the most pesky in recent memory. Everything feels out of place, the diagonal movement seems obtusely at odds with the random appearance of obstacles, and for the less patient, things don’t seem to gel progressively. Make no mistake, there is a rhyme and reason to all of it – and the payoff described above when everything clicks far outweighs the frustration.

With that said, however, Inman would have been well suited to embed the game’s passive, menu-based tutorial in the fabric of the gameplay itself, perhaps even including interstitial “tips” between rounds. I’m no fan of the practice, but here’s a place where having them definitely would have been well received! Arguably, that’s the game’s small – but measurable – stumbling point. The package all feels quite bare bones; not at the level of content (the one mode is more than enough fun!), but rather organization of that content.

That aside, everything truly is smooth sailing from there. Flip’s Escape is extremely generous with its in-app currency, allowing you to earn gems periodically with each play, in turn buying survival tools like drills for incoming rocks and magnets to swipe up missed warp stars. I highly recommend snagging some after your first few runs, as having them during your learning period improves things immensely. 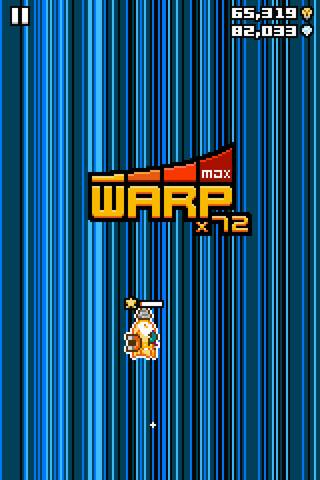 Some of the fancier buys like new skins for flip and AMI (who allows you to carry three items at once) push the cost high enough to merit spending some money, but only if you’re in a real hurry. The game lends itself extremely well to micro sessions of play, and you’re not at any sort of handicap by opting to wait it out. No bribery-by-design here!

They say that first impressions are everything, and this is perhaps doubly so in the overflowing world of the App Store. With Shaun Inman’s charming extension of Flip’s adorable world, however, the title says it all. Like the conventions it bucks, this one escapes the faux pas of a potentially poor start, and gets exponentially better each time you play.

Suburban Mysteries: The Labyrinth of The Past Review