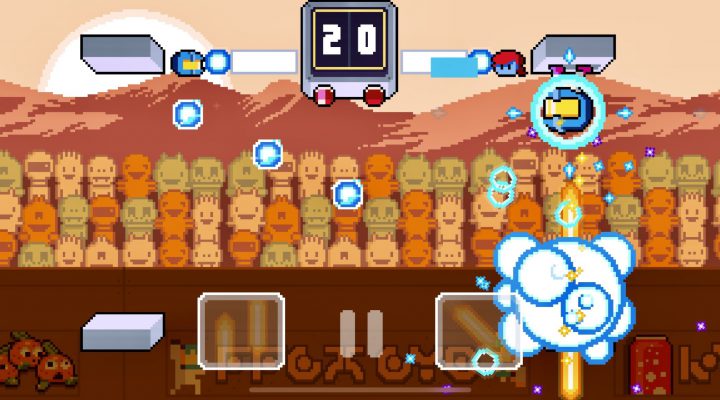 Same-device scraps can be a bit fiddly

Flipchamps Dual Strike (download from the App Store and Google Play Store) fizzes along at a breakneck pace. It’s a tap-fest, pumped full of little moments of action and tactics, that blends together bright ideas from a swathe of other games to create a fresh and frantic battle to the death.

You’re in control of an intergalactic brawler, armed with a pair of super moves that will kill your opponent with a single hit. Those attacks are only available when you’ve charged them up, and you do that by collecting glowing blue power orbs.

How do you get those? Well, you bounce around four different platforms, tapping on the four quadrants of the screen to leap between them. Your foe is trying to do the same thing, grabbing the shimmering balls to charge up their own massive whomps.

The result is a delirious ballet of back and forth speed grabbing, punctuated with brief moments of tactical violence as you try and land your devastating, round-ending attacks.

You start with a choice of two characters, but you can spend the gold you earn from playing to unlock more. They’ve all got different moves, from homing rockets to spinning fist-powered dives of death.

Multiplayer comes in the form of a same-device two player scrap. It works best on iPads, but it’s workable on iPhones with bigger screens. An online multiplayer mode would probably push the game into utterly essential territory, and it’s the only real negative point about the game.

This is a throaty squawk of a mobile game, its swagger holding together its disparate ideas and letting them blend into something with the sharpness and fun you need to keep you glued to your phone for hours.