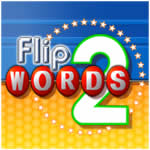 While not as prolific as match-three puzzlers, word games have a steadfast following. One of the most popular is Flip Words, an amalgamation of Wheel of Fortune, Boggle and Hangman, uniting word creation and phrase cracking in one.

Good news, folks! Those who flipped out over Flip Words, and word-wranglers in general, can now wrap their brains around Flip Words 2!

For those unfamiliar with the whole “Flip-ing” concept, it’s simple — click on letters to make words and decipher phrases. That’s it in a nutshell. Or, should I say, N U T _ H _ L L.

However, with the arrival of Flip Words 2, new features have been added that significantly enhance the experience. Among those included are higher-resolution graphics, phrase rating (unpopular phrases will be deleted from the database), add-on theme packs, automatic saves, multiple user profiles, Big Word awards and better letter tracking (showing all occurrences of a given letter). Also, Classic Mode is joined by two new modes, Strategy and Party.

Another key feature in common with the original Flip Words is a built-in editor that lets you create and upload your own phrases. Approved phrases are then added to a database and downloaded to players automatically. It’s a great extra that dramatically extends the experience.

In Classic Mode, you begin with a seven-by-seven grid of randomly-placed letter chips and a phrase to solve. Words are created by linking letters together horizontally, vertically and diagonally. The only restrictions? You can’t use the same letter more than once and each word must be at least three letters long. Scores are based on the letters employed, with more difficult-to-use letters (J, X and Z) commanding extra points. The longer the word, the greater its value. Moreover, Big Word awards are given to those consisting of five, eight and twelve letter each.

As you create words, if the first letter corresponds with one utilized in the phrase, those occurrences “flip over” (hence, the name). For example, if “A PENNY SAVED IS A PENNY EARNED” was the phrase, creating “PENCIL” would flip over the “P” in both occurrences of “PENNY,” as well as highlight “P” in letter tracking. If no matches exist, the letter is simply highlighted. By the way, creating words also fills up an Extra Turn Meter that, obviously, generates extra turns.

After you’ve created a few words, tags start to appear on some letter chips — DOUBLE, TRIPLE and FREE. Use the first two in a word, and the point value is, well, doubled or tripled. The FREE tag appears only on vowels. Include one in a word and the appropriate vowel, if employed, is revealed.

Stumped or in need of specific letters? Use Shuffle to generate new ones (at the cost of a turn). Then, once you know the phrase, click the Guess Phrase button and enter it. Or, try to fill in all the letters for a special Phrase Completion Bonus worth 10,000 points! But, watch how many turns are left. Run out before solving the phrase and the game ends.

Strategy Mode mimics Classic with a few exceptions. The object is to make words and solve phrases before running out of tokens (words cost one each). Extras are earned at the end of a round for word length, as well as a Phrase Completion Bonus of ten tokens! Big Word awards are given, too. And, Strategy offers special in-game helps that you can procure via tokens. Buy Vowel lets you purchase available vowels, Phrase Hint turns over a random letter, Big Word identifies a long word and Shuffle randomly shuffles the letter chips.

However, the coolest addition is Flip Word 2’s Party Mode, supporting up to four players. Login is transparent and match-making simple. Thus, newbies to online play can indulge without hurdles to overcome. You don’t have to wait for someone to join before you start playing either, as others can jump in dynamically. Further, a simple match-up method allows friends to play together by specifying a special “game code.”

As for Party Mode play, it’s cooperative but includes some competition. While players work together to unravel a common phrase, they receive awards for Best Word, Most Points, Phrase Letters (revealed) and Most Words. So, everyone has the potential to be a winner. A global scoreboard keeps a running tally.

What’s the verdict? Well, Flip Words 2‘s a winner. It’s easy to learn, addictive to play, features impressive production values and sports a great online component. It’s an exceptional product with just two weaknesses. Only one save game is provided per player, so you can’t switch between Classic and Strategy modes without starting over. Plus, many legitimate words are unrecognized by the game. That, however, is the extent of its failings.

Flip Words 2 is an entertaining, challenging and addictive treat, one that will have you returning often. It’s flippin’ fantastic!