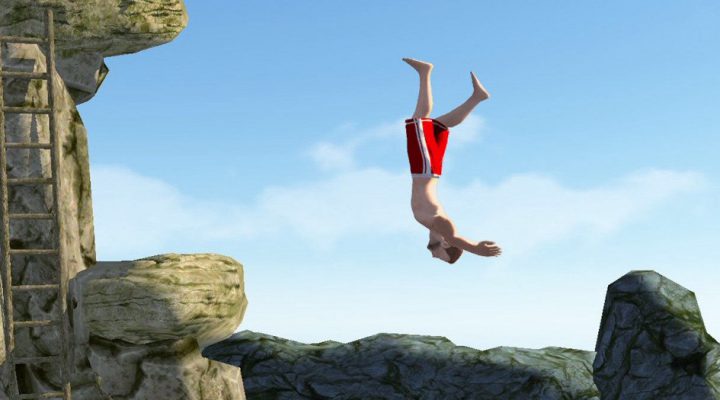 You'll get bored within a few minutes.

I think it’s entirely possible that Big Dave is dead. So far today I’ve smashed his head against a cliff, various tree branches and a number of wooden planks that make up a lakeside shack. If he’s not dead then it’s unlikely he’s ever going to dive again. He must have swallowed so much water.

Oh, wait, no Dave is fine. He’s climbed back up and he’s ready to hurl himself off something else ridiculous for my entertainment. Big Dave is a legend. He won’t let things like severe injuries and drowning stop him from being the best diver in the whole of the… Hang on he’s smacked his head on a crate.

The reason I’m focusing on Big Dave so much is that I don’t really have much to say about Flip Diving. Unfortunately it’s one of these games that’s just fine. Everything it does is fine, everything it asks of you is fine and you’ll get bored of it long before you’ve actually managed to kill Dave. 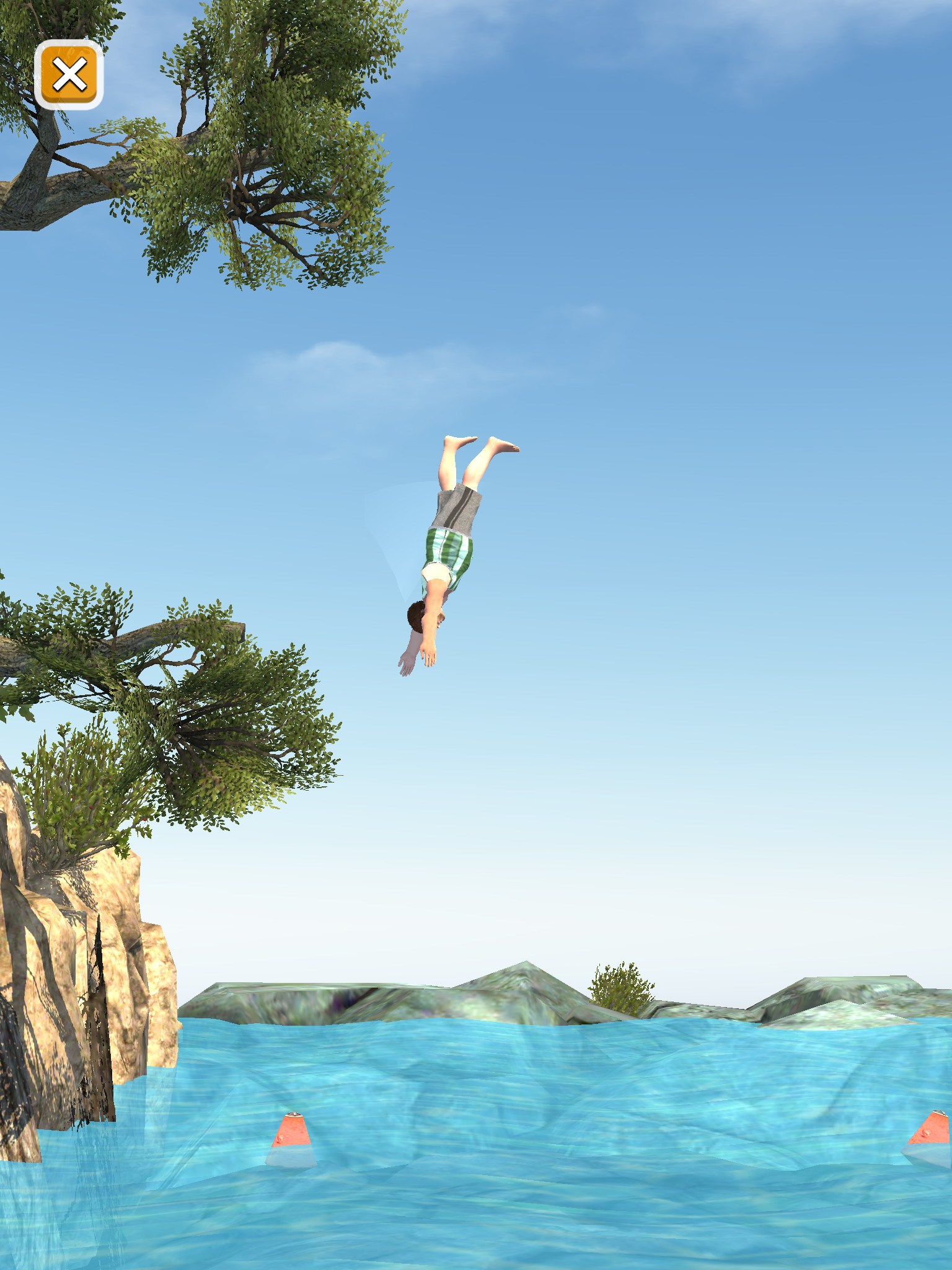 The game is a simple arcade experience that you control with a single finger. Your diver is stood somewhere high, push the screen and then release and they’ll jump off. Push again to tuck and pull off a trick, then lift up your finger to plunge gracefully into the water.

You want to be going into the wet stuff head or feet first though, backflops and bellyflops are frowned upon, despite the fact they’re much funnier than getting things right. Each stage you play on has a number of points you dive from. Complete all the points once and your landing area, designated by a couple of buoys floating in the water, gets smaller. Miss the landing area, land in a way you’re not supposed to, or smack into something, and it’s game over Dave, back to the start for you. 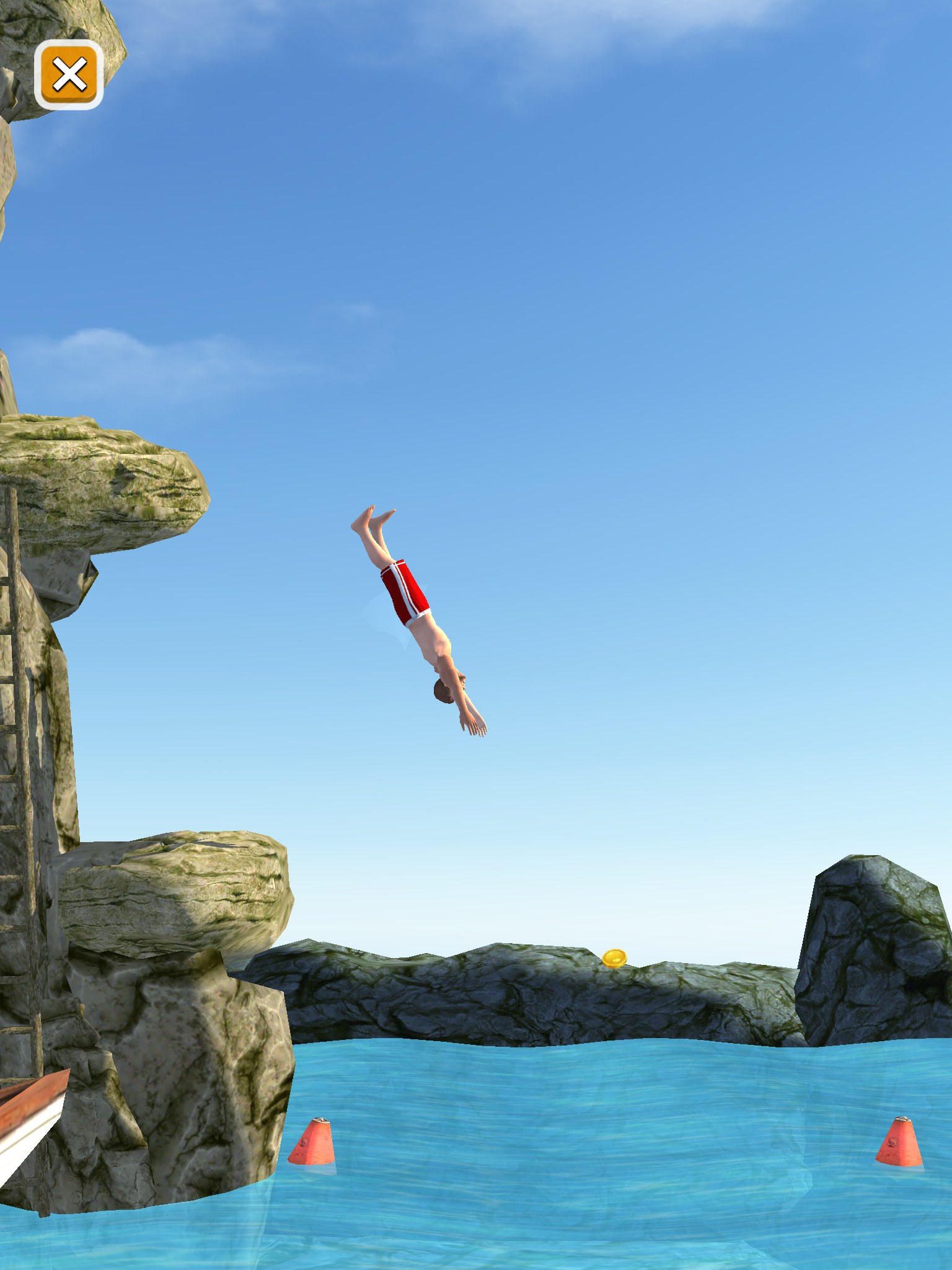 And that’s sort of it. There are coins to collect, and you can use these to spin a Gacha machine. This machine gives you new tricks, new divers and new levels to try and do all of the best dives from. But to be honest, as a progression mechanic, it really doesn’t fit with the game at all.

On something like Crossy Road, where the gameplay is the treat and the new characters are the carrot you’re chasing, it’s brilliant. Here it just sort of feels tacked on. You want to play the game, to test yourself in different situations, and it doesn’t let you. So instead of knuckling down to try and perfect a few new spins, you’ll end up doing the same backflips into the same pond until you’ve earned enough coins to get a funny fat man, a different platform to leap off, or a slightly different backflip to perform. 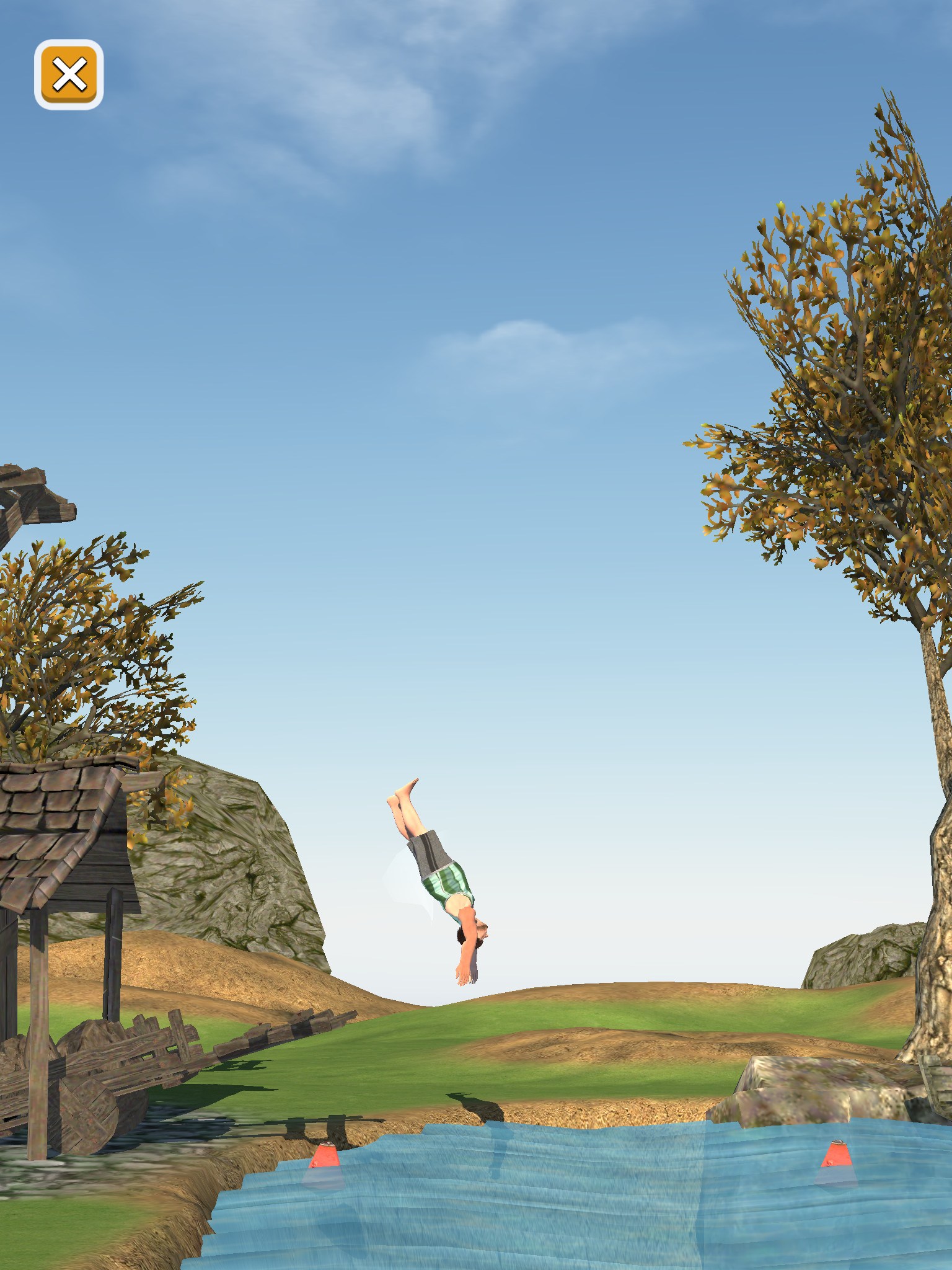 There just isn’t enough variety here. You don’t feel like you’re turning into a better diver or making inroads into the complexities of the sport; you just feel like you’re splashing around in a puddle until an arbitrary limit has been reached and you’re allowed to splash around in a different puddle.

Sure everything is polished and preened, and sometimes you’ll have a decent amount of fun while you’re flipping Dave or one of his friends into the sea, but in the end there just isn’t enough here to keep you coming back for more.

Flip Diving might be interesting as a narrative diversion about a man receiving severe concussions from a variety of objects, but other than that, it’s not really worth your time.