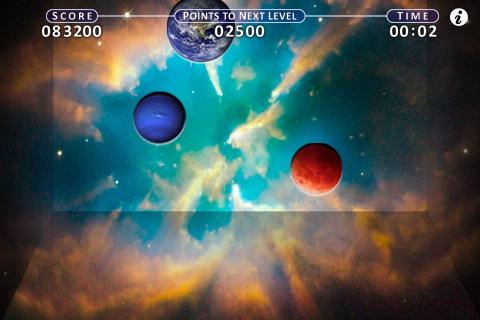 “Planetary ping pong” isn’t a phrase that one gets to use often, but these words manage to perfectly sum up what’s presented in the latest offering from AppStar Games. Previously responsible for the train-car connection game Iron Horse, the team at AppStar have set their sights skyward for their sophomore effort, delivering a ball bouncing game that takes players to the stars.

The whole Fling Pong experience could best be summed up as Skee-ball meets Beer Pong …in space! Players will attempt to bounce a ping pong ball off of the floor and into one of the planets waiting on the back wall. Each planet has a point value, and if you score enough points in a certain time limit you’ll unlock the next stage. It sounds simple enough, but like the carnival-type games it’s based on, that simplicity doesn’t really capture the challenge that awaits you.

As you complete stage after stage, the solar system starts to show you what it really has in store. Planets move across the screen. Sometimes they’ll orbit around an imaginary pivot point. No matter what you think you’re prepared for, the game manages to consistently offer up new patterns that will test the mettle even the most talented of gamers.

That’s not to say the game isn’t forgiving. Each of the levels are sub-divided into stages, and when you lose you can restart from the most recent stage. So if you die on level 27, for example, you can go back to that start of that stage to try again, which in this case would mean level 24. It sounds more confusing than it is. The important thing here is that the game doesn’t try to punish you an unreasonable amount for failure.

And failure will likely come often. There’s no denying that Fling Pong – The Planets is a game of skill. Perfecting the art of bouncing a ball to its destination is a delicate thing. Solid physics make it a snap to learn, but like all skill-based games it will take patience to master. Whether novice or pro, there’s a real feeling of satisfaction to be gained from aiming a shot just right. 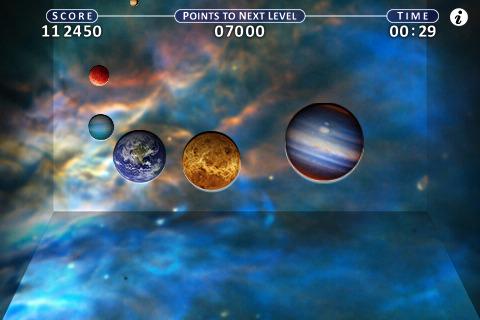 If you do find yourself struggling, players can circumvent actual talent through the use of rockets. Rockets let you target a specific planet, guaranteeing your ping pong will make contact on your next throw. Players will need to use these sparingly though, as they’re earned through good performance. That means you can’t simply rely on rockets alone.

Presentation is elegantly simple, with a boxed-room displaying the many planets in our solar system in the target zone. But while the visuals may merely warrant descriptions like “nice” and “adequate,” the musical score for Fling Pong – The Planets takes iPhone soundtracks to a whole new level. Musically, Fling Pong feels like a lost snippet from Fantasia. It’s epic and overpowering in scale, much like a soundtrack for the planets should be.

Skill-based games that provide a solid diversion on the iPhone are a dime a dozen nowadays, so it takes a real special gem to stand out in the crowd. Flick Pong – The Planets manages to make its mark by combining a top notch challenge with pick-up-and-play mechanics. If you’re looking for some simple fun mixed with a satisfying challenge, Flick Pong – The Planets should be considered money well spent.