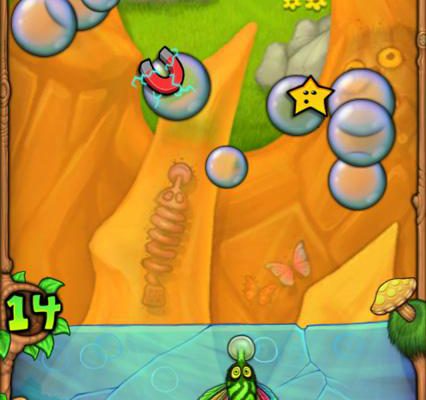 Fling a Thing is a game on the cusp of greatness

Have you ever seen those fish that stick to the side of the aquarium like a suction cup? Creepy, right? Well what if those fish weren’t fish at all, but winged creatures called “suckies”? And what if instead of hanging out all docile in your fish tank, you pulled on their tails and shot them through the air to pop bubbles? Yep – we’d think that was pretty awesome too.

Fling a Thing tests players’ skills at aiming these winged “suckies,” pulling back on their tails and releasing to send them careening through the sky. You’ll need to use your suckie to clear levels filled with bubbles, but will only have a limited number of shots to do it with. As such, you’ll want to line things up carefully if you want to have enough shots to survive for long. Eventually you’ll run out of shots and end the game, hopefully besting your previous score in the process.

As you can probably guess, Fling a Thing is yet another example of a top notch game that’s easy to learn yet impossible to put down. Think Tiny Wings or Jetpack Joyride – it’s that kind of simple yet addictive. Fling a Thing is the sort of game that high score obsessed gamers (such as myself) will go nuts for, yet at the same time it’s so simple in concept that there’s very little to say about it asides from “it’s great fun!”

In addition to the basics of gameplay – pulling on a tail and letting go – the developers have packed in a number of things to hold your interest. Different power-ups, like a magnet that’ll burst nearby bubbles or a leaf that’ll increase your number of shots, can float through the screen at any time just waiting to be crashed into. A number of unlockables await you too. New suckies, new environments, and upgrades for those floaty power-ups can all be purchased using stars, the in-game currency that you’ll earn as you play (or, alternatively, pick up as an in-app purchase). The unlockables here are a great carrot on a stick to keep you coming back for more.

Still, that’s not to say Fling a Thing is flawless. The game’s biggest issue is that it just doesn’t give you enough room to, well… fling your thing. The placement of your suckie at the beginning of each turn is much too low, meaning your finger will sometimes slip past the bottom of the touch screen interface causing you to fling your thing unexpectedly. Worse yet, if your suckie happens to land at the far left or far right and you have a bulky case on your iPhone, you won’t be able to get the range of motion needed to aim your thing anywhere but straight up. In a game demanding of precision, these hiccups can really be a problem.

Thankfully Fling a Thing offers up enough shots each game that the occasional missed shots that these problems create can easily be overlooked. It’s also worth noting that in the free web-based version problems such as these are non-existent, as you can drag your mouse well outside the boundaries of the game to line up your shots. 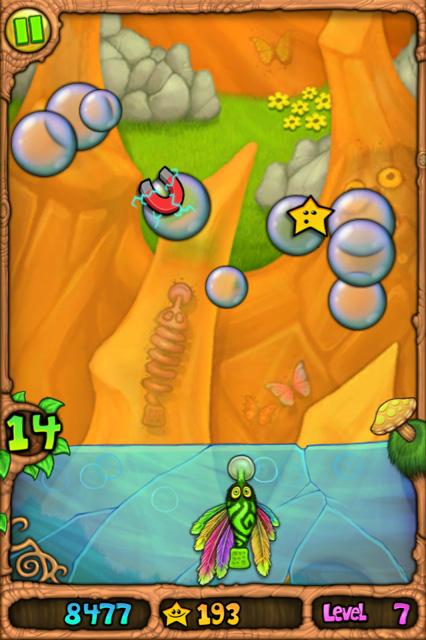 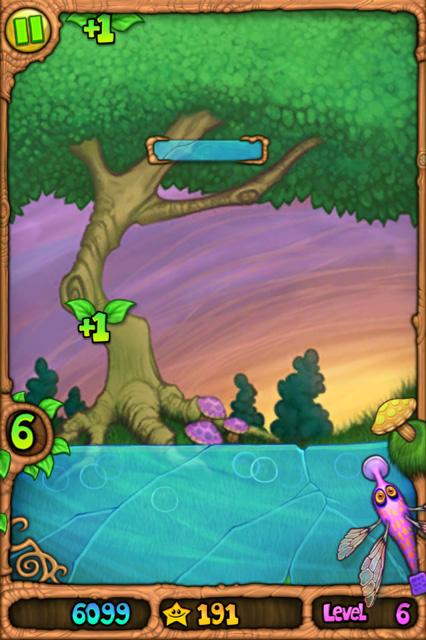 Difficulties like these weren’t the only questionable design choices that popped up, though. The unlockables – a big draw in terms of replayability – offered very little in terms of variety. While each of the suckies you can purchase has a delightfully unique appearance, they all play exactly alike. The same goes for the three different worlds you can open up. Sure the levels are a little different in each, but there’s no grand surprise waiting for you in any of them. If you’ve played one, you’ve played them all.

We were glad to see that the power-up unlockables had a direct impact on the gameplay, but it feels like a missed opportunity that the other unlockables didn’t follow suit.

While we may have been critical about a few bumps in the road, there’s one area that’s simply impossible to take umbrage with – Fling a Thing‘s presentation. The visuals here are terrific, and the sound design too. Each suckie has been given a distinct personality thanks to the game’s artwork, and the backgrounds are equally gorgeous. The music seems to come right out of a Saturday morning cartoon/carnival ride/Danny Elfman soundtrack. It’s exquisite.

Fling a Thing is beautiful, charming, and wonderfully addictive, but it has a few issues that are holding it back. Fans of quick-play high score drives are going to love what this one has to offer, and with a few smart tweaks, Fling a Thing could be the next Doodle Jump. It’s a fun time to be sure – but we’re still going to keep our fingers crossed for an update that addresses some of these concerns.